The Expanse is apparently still offering early previews of its episodes, so when I went to watch the second episode, I found the third ready to go as well. That means you get two reviews for the price of one!

…Though given that the price is “free,” that’s maybe not such a great deal.

Most of this episode is devoted to Holden and his ragtag crew trying to escape in a crippled shuttle. Desperate repairs needed, little hope, you know the drill.

It’s certainly more eventful than the pilot, but that isn’t exactly saying much. It’s all things other sci-fi shows have done, and done better.

There is once again a cliff-hanger, so at least they’re good at making you want to move on to the next episode, but if they don’t provide a good pay-off soon, they’ll just be stringing the viewer along.

I hate being strung along.

The other plots continue to go nowhere slowly. My only comment on Chrisjen and her arc so far is that she appears to be pretty much just Dick Cheney in space. It’s making me feel oddly conflicted because I liked the actress so much in Mass Effect, and every time she speaks, I’m still thinking “Oh, yay, Quarian,” but now I kind of want to see her get hit by an asteroid. 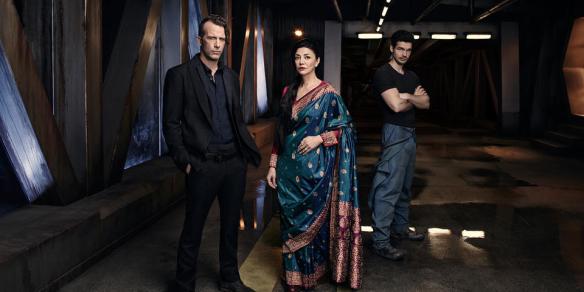 The only thing that really interests me so far is Miller’s story — it is at least an effective mystery, and that’s always welcome — but it is, again, going nowhere. Most of his scenes in this episode are devoted to some side plot about water theft that doesn’t appear to have anything to do with anything.

I have seen some sci-fi shows that were very dull to start and then became great — Stargate: Universe comes to mind — but if The Expanse doesn’t do something impressive soon, I’m giving up.

Three episodes in, and we now get our first real glimpse of the third major faction in The Expanse: Mars.

Turns out they’re basically the Galactic Empire, at least in terms of art design.

Rifts quickly form in Holden’s crew as the Martian interrogators attempt to find — or create — guilt among them, and I come to the conclusion that I don’t particularly like any of them.

I do, at least, enjoy seeing the Martians get some development. It’s very early days yet, but they have the potential to be an interesting culture.

Meanwhile, Chrisjen’s story takes an odd turn. On the one hand, she seems much more sensible and a bit more likable this time around, but on the other, it seems very out of sync with the rest of her character to date. Is she a warmonger or not? Make up your mind, Expanse.

In fairness, “Remember the Cant” is definitely a step up from previous episodes. There is a pretty good mystery developing here. Who is trying to start a war, and why? It’s certainly keeping me guessing.

But again, I can’t escape the feeling I’m just being strung along. Sometimes a good mystery only serves to make you drag yourself through an otherwise tedious story. I’ve had that happen before, and I’ve regretted falling for it.

“The Expanse” definitely has the potential to be a good show, but it’s still aways off, and I’m not sure how much longer my patience is going to last.

The fact is I’m just now enjoying this show very much. I want to, but I’m not.