I’ve learned not to take any release dates for The Secret World as gospel until you’re playing the new content, but currently, Issue #9: The Black Signal, otherwise known as Tokyo, is slated to be released Wednesday, June 4th. Even if it is delayed one final time, it shouldn’t be by more than few days.

Excuse me while I scream in joy for a moment.

*Muffled whoops from the background.*

It’s finally coming. Tokyo (or Kaidan, which is the new zone’s actual name) is not only the biggest content update for TSW since launch, but it has massive importance to the storyline. The entire story of TSW began in Tokyo. Everything started to go crazy after the Filth outbreak in the Tokyo subway system. It’s been said the events of issues #9 through #11 — all of which are set in Tokyo — will be the culmination of the “first act” of TSW’s plot, and a new arc will begin after that.

Plus, there’s new AEGIS horizontal progression system and, I’m told, a boatload of quality of life improvements and new clothes.

Joel has also been giving some interesting hints about the future. Apparently, we’ll soon be receiving lore from the Filth as well as the bees (something I’ve wanting for a while), and they’re planning to improve their content release cycle. The new plan is something new at least every two months, be it a full issue or a Sidestories mission pack like the new investigations we got recently.

I’m a bit skeptical about them meeting that goal, but any improvement in the rate of new content is welcome. 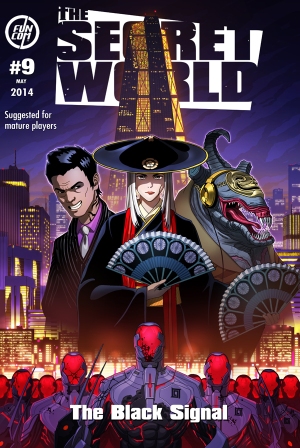 I had planned to wait a few days after launch at least before visiting Tokyo myself, but I don’t know if I’ll be able to contain my excitement. My plan to check out free to play Defiance may just have to go on the back burner.

See you in the half-light.