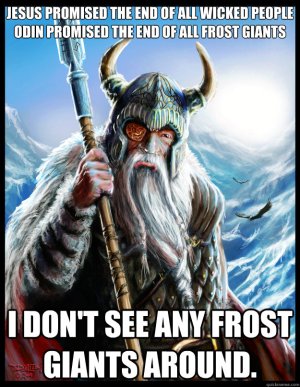 If you have any interest in fantasy fiction, odds are you’d enjoy reading up on Norse mythology. They’re pretty much the same thing. Dragons, Elves, Dwarves, magic rings, epic battles, evil giants… All these things spring from Norse myths.

This is not coincidental. J.R.R. Tolkien, who gave birth to the modern fantasy genre, made extensive study of Norse mythology and based his works on it.

There’s one story out of the Norse myths in particular that’s stuck with me over the years, and the more I think on it, the more it strikes a cord in me.

It deals with Odin, the god of wisdom. Also known as the All-Father, Odin was the king of the gods and the creator of the world. One of the most famous stories of him is how he came to learn the secret of runes.

Odin had to sacrifice dearly to prove himself worthy of the power of runes. So he impaled himself on his own spear, tore out his own eye, and hung himself from the branches of the World Tree — still impaled — for nine days and nine nights.

Only after he survived this ordeal was he granted the knowledge of runes, which he then shared with the peoples of the nine worlds.

This, to me, is a very telling story. It shows how highly the Norse valued knowledge, that their chief god would torment himself in this way simply so that people could learn to read and write. It is yet another thing that proves the Norse were far from the brutish savages popular culture paints them as.

It speaks to me as a writer. It paints written language as something sacred, something meaningful, something powerful.

And when you think about it, language is humanity’s greatest invention.

Humans are the dominant species on Earth for one reason: We work together better than anything else. Sure, we’re really smart, but none of that intellect would mean anything if we couldn’t pass our knowledge on to each other. So what if one of our ancestors learned to make fire if that knowledge had died with them?

Language is what allows us to share plans with each other, to strategize, to pool our knowledge and become greater than we could ever be as individuals. It lets us learn and teach, study and collaborate.

And written language gives us the greatest ability to communicate. It allows us to share knowledge across time and space. I can write this blog in my living room in Ontario, and you can read it in your office in New York, or your bedroom in London. Ancient scholars can inscribe the tale of Odin’s sacrifice on stones, and it can survive the centuries to eventually inspire me.

Language is power, and artistry, and life, and wisdom. It is the soul of what makes us human. And that is why I love the story of Odin’s quest to learn the secret of runes. It acknowledges just how important words are, and how grateful we should all be that we have this wondrous ability. It shows you how wise my Nordic ancestors truly were.

Praise be to the One-eyed God.