I have a lot to say, both good and bad, so I’ll get right to it. Let’s start with…

For me, Mists of Pandaria has been an expansion defined by grind, excessive gating of content, and a tedious and confused endgame that seems designed to keep me playing the game for as long as possible not because I enjoy it, but because that’s the only way to play.

Let’s start with the daily grind early on. This issue has been beaten to death, but I’d like to address it anyway, because I think some important points have been lost in the arguments.

There’s nothing wrong with dailies. They’re a valid form of content, and an important part of WoW’s endgame. The problems with dailies as they were at the start of Mists of Pandaria are twofold.

One is that most of them were simply not good dailies. They were largely lacking in vehicle quests, bombing runs, or anything else interesting. How many expansions need to go by before Blizzard realizes that killing crabs for meat at a 25% drop rate is not fun and never will be?

The other, more important issue, is that forcing everyone into a single type of content to be competitive is always a bad idea. We went through this in Cataclysm with “raid or die.” In MoP, it became “rep or die.”

Neither dailies nor raids are bad content; the problem is that everyone had to do them if they wanted to progress, whether they enjoyed them or not. People should be able to progress through whatever content they most enjoy.

This worries me more than anything, because it shows Blizzard isn’t learning from their mistakes. MoP had many of the same problems as Cataclysm, just in a slightly different wrapper.

On top of that, endgame progression was made all the more daunting by how confusing it was. I’m pretty tolerant of iteration in a live game, but the changes to the gearing path just about gave me whiplash.

“You need to grind rep to buy valor and justice gear. Okay, now just valor gear. Now you can also use your valor to upgrade your gear. Oh, wait, nevermind, we removed that. Here’s new valor gear locked behind a new and marginally less painful rep grind! Okay, now we’re bringing back the valor upgrades, and some of the old valor gear now costs justice, but no new valor gear.”

Valor and justice were also greatly devalued. Valor rewards were drastically reduced from where they were in Cataclysm, and justice was made so useless that it was mostly just converted to honor so people could buy PvP gear as a starter in PvE. 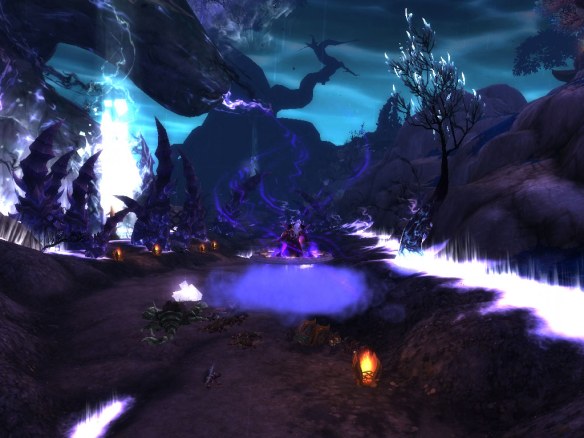 Let me repeat that: The primary PvE currency was only useful as a way to buy PvP gear, to use in PvE.

And this hobbling of valor and justice rewards made players more reliant on luck with drops, further increasing a sense of grind. Nothing like running raids all week and getting absolutely nothing meaningful out of it.

For as long as I’ve played WoW, my endgame has revolved around farming justice and valor (and frost and triumph before that). It’s what I enjoy. It’s how I like to play.

By completely mangling the valor/justice system, Blizzard all but destroyed my endgame. They tried to make me do more, but they left me unmotivated to do anything at all, and I wound up losing interest in WoW for months at a time.

This brings me to another point: I find Blizzard’s efforts to artificially extend the life of content to be ultimately self-defeating.

For instance, I loved the Landfall storyline in 5.1. Absolutely top notch storytelling. But I did it once, and I’m never doing it again, because I’m burnt out on the dailies needed to unlock it.

By contrast, I also loved Elemental Bonds back in Cataclysm, and since it’s all fun and no grind, I’ve done it on every character that’s hit 85, and will continue to do so for the foreseeable future.

Another thing that greatly irritated me was the immense gating on the Raid Finder. Waiting over a month to see a full raid after its release is ridiculous.

It’s especially painful if you care about the story, because it means you either have to cut yourself off from the WoW community entirely or have everything spoiled for you long before you get to experience it yourself.

And it’s yet another thing that sends the message that anyone not in a raiding guild is a second class citizen.

Then there’s a lengthy list of little annoyances: The pointless removal of Have Group Will Travel, no “Tome of Pandarian Flying” for alts, no spectral gryphons while dead, etc.. 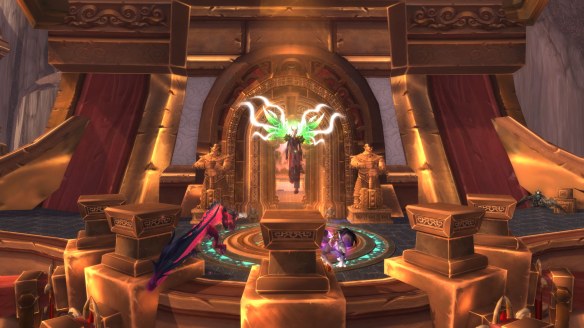 Add all that to my longstanding complaints about the game — such as my dislike for the subscription model and Blizzard’s apparent unwillingness to put any significant effort into moderating the community — and I’m finding it very hard to get excited about WoW like I used to.

Behold the wonders of Pandaria:

Probably the best thing about MoP was Pandaria itself. The entire continent is beautiful, immersive, and filled with memorable characters and captivating soundtracks.

I can’t say enough good about Pandaria. It’s so different and exotic, but yet it doesn’t feel out of place compared to the rest of the Warcraft universe. Blizzard crafted thousands of years of new history for this continent, but it doesn’t feel random or slapdash. It fits perfectly into the greater story of Azeroth.

Speaking of story, MoP featured one of the best main storylines in WoW to date. Far from the kid-friendly expansion many expected, it was incredibly dark and mature. It harkens back to the glory days of Warcraft III with its moral complexity and epic scale. 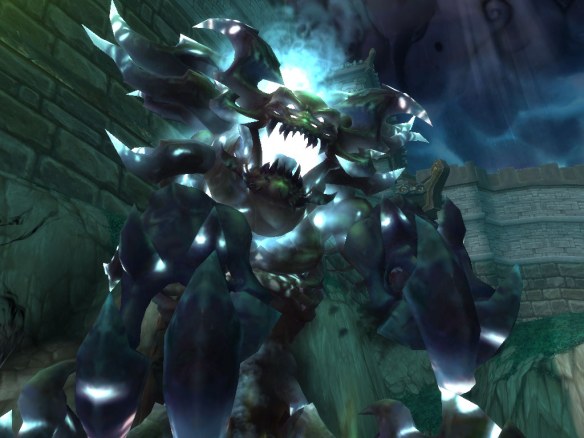 At its best, Warcraft has always been a bit subversive. It seems to glorify war at first glance, but at its heart, it’s really about how evil and pointless war truly is. MoP exemplifies this.

MoP made me emotionally invested in a way few other expansions have. It wasn’t afraid to paint both Alliance and Horde as less than perfect. We as players did terrible things and failed in some spectacular ways, but we also had the opportunity to redeem ourselves and make things right. It was a very satisfying arc.

Please, Blizzard, give us more of this.

I was also quite impressed with the Pandaren themselves. I was never a panda hater, but I definitely had doubts about whether they would be a worthy addition. I was quite happily wrong; the Pandaren are one of the best cultures in Warcraft.

The clever thing was that Blizzard let us see all sides of Pandaren culture. From the humble Tillers, to the sage Lorewalkers, to the mighty Shado-pan. Seeing such diversity among the Pandaren made them feel like a complete people, not just an archetype.

Also, I absolutely adore Lorewalker Cho and Taran Zhu. Each is utterly awesome, but in completely different ways.

Monks were also a very positive addition. Admittedly, as a rogue player, I can’t help but feel cheated by monks getting all the improvements we’ve spent years asking for, but brewmaster tanking is stupidly fun, so I can’t stay mad at monks.

While the progression model was a train wreck, the actual content of MoP’s endgame was very good, dailies and Timeless Isle aside. Throne of Thunder was a bit dull, but otherwise, the raids were all fun. I loved all the details and cameos in Siege of Orgrimmar.

Scenarios are fantastic. They fill a great niche of quick, low-stress group content, and they’re a great storytelling tool.

I believe that the five-man dungeons in MoP were among the best in the game’s history. They were visually engaging, had good lore, and were neither too long nor too short.

Unfortunately, this brings up another complaint, as MoP was the first expansion in WoW’s history to not add any five-man dungeons after launch.

There’s not much to say about this decision other than that it was terrible, and it once again sends the message that what I want doesn’t matter because I’m not a raider.

It seems as though there’s no positive aspect of MoP that doesn’t come with some annoying caveat.

MoP had all the right ingredients to be a mind-blowing expansion. But they still managed to suck almost all the fun out of it with a litany of poor design decisions. I won’t say it was a bad expansion, but it fell far short of its potential, and the way Blizzard keeps making the same mistakes year after year leaves me very worried for the future of the game.

Overall rating: 7.1/10 As a story and a piece of art, it was excellent. As a game, it was a major step backward from where we were at the end of Cataclysm.

8 thoughts on “Review: World of Warcraft: Mists of Pandaria”