Humanity was not born free:

You may recall I posted a mysterious teaser image a few weeks ago. The time has come to reveal what that was about.

I am pleased to announce I will soon be releasing The Books of the World Spectrum, a new series of steampunk-inspired science fantasy ebooks from yours truly. 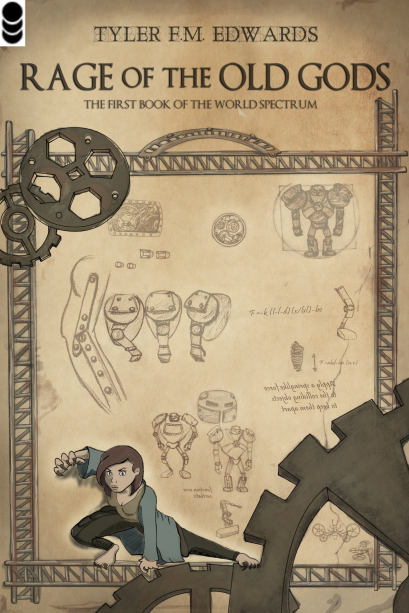 Initially, two books will be released: Rage of the Old Gods and Children of the Gods. I am currently in the process of writing a third book in the series, tentatively titled Human Again. More details on it will come once the first two books are released.

So what are The Books of the World Spectrum? To start with, they’re works of science fantasy, meaning they incorporate elements of both sci-fi and traditional high fantasy. In my case, this means explaining sci-fi concepts — such as robotics and genetic modification — through various types of magic.

In this series, I approach magic as more science than art. I like to say that my wizards are more geek than Gandalf. Rather than drawing power from arcane incantations or mystical beings, their magic is enhanced through cold, hard technology.

The phrase “world spectrum” refers to the setting, a spectral multiverse where various worlds are separated by their energy level. High energy worlds teem with life and thrum with power, while low energy worlds are icy places where the handful of creatures that do survive trudge through their lives in perpetual slow motion.

The human race is native to the temperate world of Barria, but they did not arise naturally. They were created to be slaves for the tyrannical Old Gods. They languished for uncounted generations before winning their freedom in the ancient conflict known as the Liberation, and the dark legacy of their origin haunts them to this day.

The star of the series is Leha, a young merchant and amateur historian. Leha is not exceptionally strong, intelligent, or skilled. Most would consider her a fool with more dreams than good sense.

But terrible things long thought impossible are about to be unleashed on the spectrum of worlds. Humanity’s greed and hate have opened the way for the Old Gods to reclaim their world. In such times, it will take someone with Leha’s reckless defiance to save humankind.

Leha is supported on her journeys by Drogin, her elder brother. A skilled Automaton technician, Drogin has a bit more caution than his sister, but his desire to look out for her usually leads to him being dragged into her crazy schemes.

Along the way, Leha will also gather allies from many worlds and nations. If you read this blog regularly, you have already encountered one such ally in the short story In Her Sister’s Pose. Now all grown up, Natoma serves as a mentor to Leha.

I will be publishing through Smashwords. This means the books should be available through most major ebook retailers, including Amazon and iBooks. The exact price per book is yet to be determined, but expect it to be very affordable.

Both novels should be released at approximately the same time. I don’t have an exact release date to share right now, but I’m hoping to launch in late spring or early summer.

I will soon be launching a new blog devoted to The Books of the World Spectrum. It will feature news, bonus stories, background info on the worlds of the spectrum, and some unique features you might not expect from a book site. Cast photos, anyone?

I don’t plan to stop posting here at Superior Realities, but my rate of posting may slow. It will depend on how good at balancing my schedule I prove.

I’ll have more info to share as the launch date approaches. In the mean time, I will leave you with teasers for the first two books. I hope you will all be there to support the series come release, and please share this news with anyone you know who might be interested in reading something a little different.

Rage of the Old Gods:

Humanity was not born free.

Long ago, humans were slaves to the Old Gods. They rebelled, overthrowing the Gods and establishing their own societies, but peace did not last. Humanity slaughters itself in petty wars.

Now, an army of war Automatons threatens to destroy the land of Eastenhold. To save her people, a young woman named Leha travels to the to the lost worlds of Tyzu and Sy’om, whose alien powers defeated the Old Gods in ancient times.

But there is worse to come. The wars of humankind only hasten the Old Gods’ return, and even Leha’s newfound powers may not be enough to save her people from the Gods’ fury, or from the hatred in their own hearts.

Children of the Gods:

Seven thousand years ago, the Old Gods’ human lieutenants were executed so that humanity could begin a new age free from the sins of the past.

Or so history records. The truth is much different.

Still reeling from the Old Gods’ return, Leha and her allies must now confront their fallen cousins in a war that will not only imperil humanity’s survival, but also its very soul.

6 thoughts on “Announcing The Books of the World Spectrum”