This being a Blizzard game, I have a lot to say about Heart of the Swarm. To prevent killing my readers with a massive wall of text, I’m splitting my review over two posts. Today, we cover the campaign. Spoilers will be marked, so you can skip them if you haven’t finished the game yet. 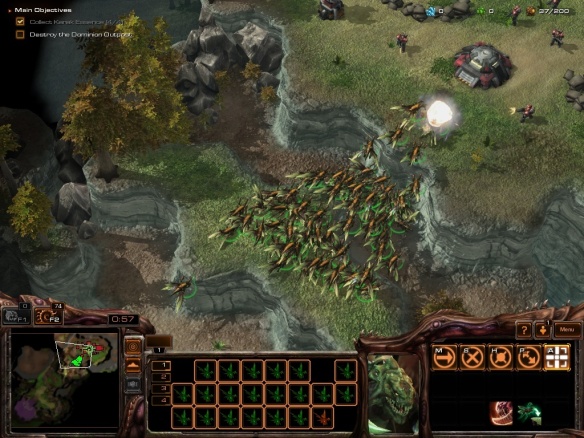 The great strength of Wings of Liberty was its inventive level design. Previous strategy games were primarily an endless spree of “destroy the enemy’s base” missions, but WoL provided some kind of unique mechanic or complication for nearly every mission.

Heart of the Swam has taken this same idea and enhanced it even further. It would not be an exaggeration to say that HotS has the best and most original level design of any RTS game in history.

It should be noted that Zerg is by far my least favourite race to play in Starcraft II, but even so, I found nearly every mission in HotS to be stupidly, ridiculously fun.

What was most clever about the missions was the way they very much hammered home the feeling of the Zerg. The idea of feeding on your enemies to grow, evolve, and overwhelm more enemies is very present in most missions.

A particular standout that will no doubt be cited in many reviews is a mission designed to emulate the movie Alien. You start out with but a single Zerg larva aboard an enemy ship, and you must crawl through air ducts and shadows to consume lifeforms, gain biomass, and eventually spawn more Zerg.

It illustrates the deadly ingenuity of the Zerg as a species: it only takes a single larva to fully corrupt and consume an entire ship full of enemies.

I think the most interesting missions, though, were the ones where the player controls only a single hero unit — usually Kerrigan.

RTS games have had the “hero and a small group of units in a dungeon” missions forever, but HotS has taken the concept to a whole other level. Aside from still using RTS controls, these missions are indistinguishable from a high quality action RPG, with boss fights to rival the greatest World of Warcraft raid encounters.

This brings me to my next point:

Kerrigan is my hero — literally: 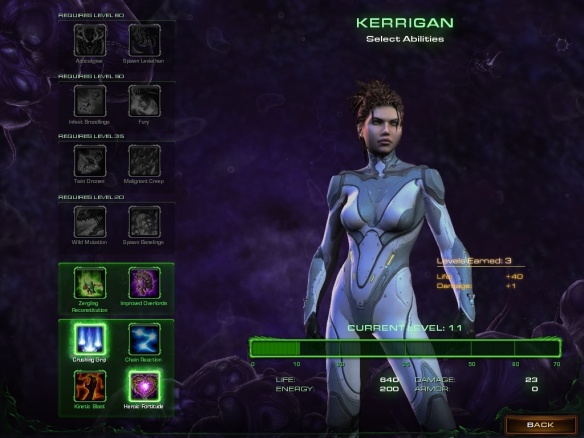 As someone who loved Warcraft III and its hero units, seeing them disappear in Wings of Liberty was a bit disappointing. But HotS is the true successor to Warcraft III in the unique genre of role-playing strategy game.

HotS is the perfect hybrid of RTS and RPG. It has all the best aspects of both genres and few, if any, of their weaknesses. The heroic power and personal progression of an RPG meld perfectly with the epic scale and deep gameplay of an RTS.

The really great thing about the power of Kerrigan as a hero unit is the way it feeds back on the level design. It allows HotS to throw challenges at the player that would otherwise be utterly insurmountable, but because Kerrigan is so powerful, the impossible becomes possible, and it feels great to be able to pull off such feats.

I’m sure it will likely be a futile hope, but I would be overjoyed if the hero mechanic continued into Legacy of the Void.

All that being said, the campaign did still have flaws. 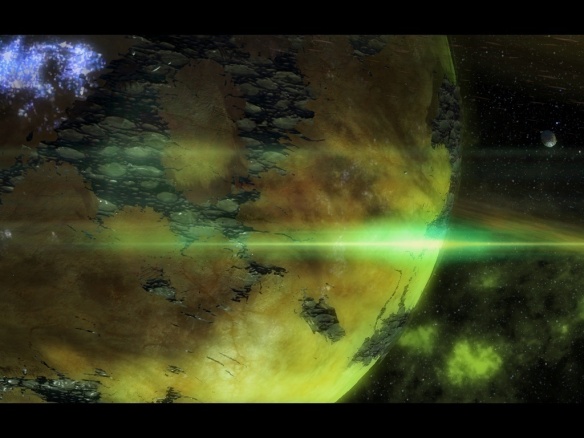 The downside to the inventive level design of WoL and HotS is that they both featured too many missions with a time limit of some sort. At first, this is a refreshing idea that makes the game feel much more intense.

But both games have relied too heavily on it. When nearly every mission is a panicked rush to the finish, it ceases to be exciting, and you lose the chance to stop and appreciate the subtleties of the game.

It gets particularly bad when several of these missions come in rapid succession, as the constant stress of trying to beat the clock builds up after a while. It becomes more an endurance test than an enjoyable gaming experience.

On the plus side, the final mission was an old school, hour-long war of attrition, and I’m very grateful for that.

The rushed pace of the missions ties into my other main complaint with the campaign, and that is that it’s very short. Technically, it has nearly the same number of missions as WoL, but many of those are evolution missions — mini-scenarios where you choose to evolve a unit one of two ways.

Evolution missions are a really neat idea, and I enjoyed them a lot, but they should not have been used as a substitute for real missions.

It took me about two weeks to finish WoL, but I finished HotS in less than a week, and that’s while playing at an unusually slow pace. Considering how long we had to wait for this game, that’s just not acceptable, in my eyes.

WARNING: Here be spoilers. If you wish to avoid them, skip ahead to the next part of the review.

The story in HotS is told better than WoL’s was, but overall, I think WoL had a better story to tell.

The story arcs in HotS are now unified so you can’t bounce between them schizophrenically. This is a massive improvement and makes the story feel much more focused and coherent.

Unfortunately, the story itself was a bit disappointing.

Whereas WoL’s plot started dull but quickly grew to excellence, HotS starts off well but then loses its way.

The early missions are nothing short of brilliant, containing some of the most emotional and gripping moments in any Blizzard game to date.

But they started to lose me when Kerrigan re-infested herself. Considering we spent a whole game trying to make her human again, I did not enjoy seeing her throw that all away almost overnight.

Yes, we did free her from the evil of the Queen of Blades and the corruption of Amon, so it wasn’t really a waste that we de-Zerged her, but on a very visceral level, it feels unsatisfying to see all the work to bring her and Raynor together again come to naught.

I know most people want Starcraft games to be nothing but gloom and death, but after all they’ve been through, I just want to see Sarah and Jim ride off into the sunset together.

I also felt Mengsk’s death was entirely too clean and simple. There needed to be some sort of twist or something. Perhaps the “ha ha, joke’s on you; Amon’s already returned” would have worked better coming from Mengsk than Narud.

This would also cover another complaint, and that is that the Amon and Mengsk plots felt too separate from one another. Bouncing between them felt a little odd.

On the plus side, I really loved how they fleshed out the history and identity of the Zerg. There were a lot of ways they could have screwed this up, but they hit a nice balance between showing how Amon had corrupted them without making them out to be kind, cuddly killer space bugs.

The original Zerg weren’t universe-consuming hellbeasts, but they weren’t particularly nice, either. They were Darwinism incarnate — apex predators with no code beyond survival of the fittest.

That’s pretty cool, if you ask me.

On the whole, the story is good from a “big picture” standpoint, but very weak on character and emotion. This is especially disconcerting because the first few missions lead one to believe this will be a very emotional and character-driven game.

Heart of the Swarm deserves serious praise for accomplishing something I didn’t think was possible: it made me enjoy playing Zerg.

From a strict gameplay perspective, HotS clearly draws on everything Blizzard has learned from their long history of producing the best strategy games around, and the result is an exceptionally fun game.

Unfortunately, the problems with the story make the game feel a little soulless, and it’s over so quickly that part of me wonders if it was really worth the wait, despite how much I enjoyed it.

1 thought on “Review: Starcraft II: Heart of the Swarm Campaign”