Having left behind the lush pastures of the Valley of the Four Winds and the haunted jungles of Krasarang, I’ve moved on to the north of Pandaria and the mountainous zone of Kun-Lai Summit. I mostly played this zone on my rogue, but I also did a few chains on my warlock. 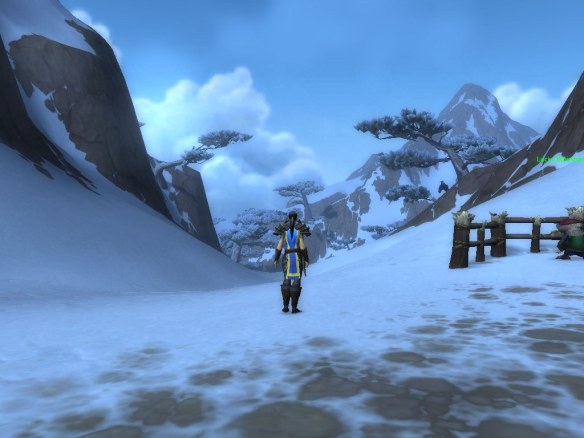 The snows of Kun-Lai:

Kun-Lai Summit is the first zone since Wrath of the Lich King with a significant quantity of snow. There was never any significant chance I wouldn’t like it.

The visuals aren’t the only thing I liked about Kun-Lai, but they’re certainly a big plus. It’s a beautiful zone, but it’s not pretty, if you catch my meaning. I much prefer zones with this kind of harsh beauty to more welcoming areas. Teldrassil is beautiful, but that’s its problem. It’s so nice that it’s impossible to feel any sense of danger or adventure while questing there. 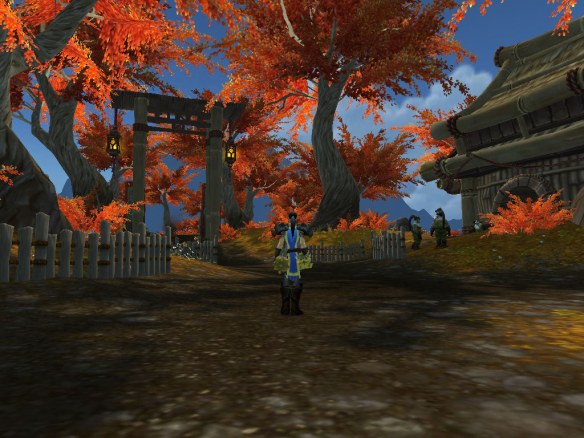 Kun-Lai is incredibly beautiful, but its a stark beauty. It has an edge to it, a feel of mystery and menace that makes you want to charge toward the horizon and face whatever it can throw at you.

The landscapes are unusually varied, too. Kun-Lai includes everything from snowy peaks to harsh steppes to tropical coastlines.

These visuals are complimented with some truly impressive music that combines the harmonious Asian influences heard elsewhere in Pandaria with an ominousness that underscore the zone’s wild feeling.

When it comes to the quests, I find Kun-Lai reminds me of Krasarang. There aren’t really any mind-blowing or extremely memorable moments — barring one, which I’ll get to — but everything is solid and well-done. There are no glaring examples of bad design or story-telling. And unlike Krasarang, Kun-Lai’s stories don’t feel rushed or unfinished.

The zone does have its lackluster moments, mostly surrounding the Grummles, but even those aren’t actually bad. I expected to hate the Grummles, as I dislike most any race designed as a cartoonish representation of one character trait as opposed to real people. See: Goblins, Gnomes, Hozen, and every Star Trek alien pre or post-Enterprise.

However, I found myself developing a certain fondness for the little guys. I think one key reason for this is that, unlike some similar races, they fit well into the universe. Goblins and Hozen are too obviously the invention of modern culture. They stick out like a sore thumb.

Grummles fit, though. They remind me of all the eccentric gremlins and fairies you see in old myths and folklore. It makes sense to me that there’s a race of tiny, superstitious oddballs living in the mountains of Pandaria.

Kun-Lai continues to hammer home the devastating consequences of the arrival of the Horde and the Alliance with its quest chains surrounding the Sha and Yaungol. Meanwhile, the NPCs from the Jade Forest make a return and steadfastly ignore the way their actions have made the Pandaren suffer. Simply put: We are horrible, horrible people.

I have to say, I’m loving this whole arc. I like any story where expectations are reversed, where the heroes have to confront the possibility that they may not be as heroic as they thought. This more mature type of morality is reminiscent of the good old days of Warcraft III, and its return makes me very happy.

But I’m also wary. The story isn’t over yet, and it won’t work if there isn’t some great change or revelation at its conclusion. If Mists of Pandaria concludes with the Horde and the Alliance still at each other’s throats as they always have been — and realistically, I don’t see how it couldn’t — this will all have been for naught.

Getting back to Kun-Lai specifically, I also enjoyed the arc revealing the alliance between the Zandalari and the Mogu. I’m not really a big Mogu fan — they’re too basic, too crude — but linking them to the Zandalari is a great way to make the events on Pandaria feel connected to the rest of Azeroth.

It brings the Warcraft universe together rather nicely, and the revelation that the Zandalari lost their home shows that Blizzard is not going to just ignore the consequences of the Cataclysm. This kind of continuity is necessary for a truly great story, and it’s something World of Warcraft has tended to lack until recently. 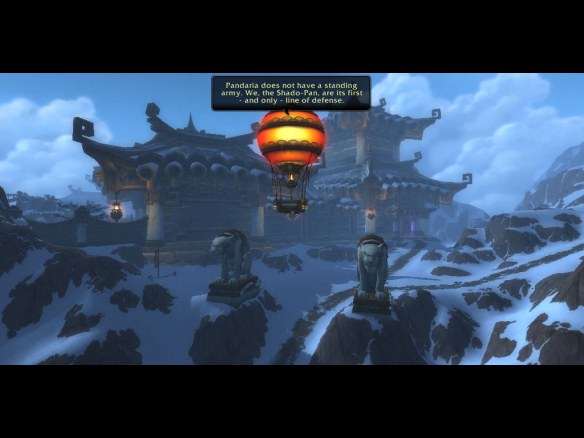 I mean, how many WoW players who never played Warcraft III realized that WoW takes place immediately after what amounts to the apocalypse? How many realize the Alliance and the Horde were at peace before WoW?

That’s an old rant, though.

While the Sha and Mogu plots were fun and hold greater significance when taken in the context of the whole of WoW’s story, they ultimately weren’t exceptional quest chains. They’re not the “home run” moments we saw in the Jade Forest.

But there is one quest in Kun-Lai that stands out for me: Anduin’s debate with Xuen in which he tries to convince the Celestial that there’s more to the Horde and the Alliance than the violence they’ve shown on Pandaria.

I loved this quest. It was very fun gameplay to battle all the Sha mini-bosses, but it was even more enjoyable from a story perspective.

Now, maybe this is just down to me being an Anduin fanboy, but I thought it was quite interesting to hear him trying to argue for the innate goodness within us, while Taran Zhu takes the opposite viewpoint off to one side. Interestingly, I found myself agreeing with both representatives in a lot of ways.

Though small, I also liked the role played by Sunwalker Dezco. It was good to see signs of dissent within the Horde. It’s long overdue, as the implication for the last two expansions has been that the Horde is entirely okay with Garrosh Hellscream’s honourless tactics and genocidal goals. 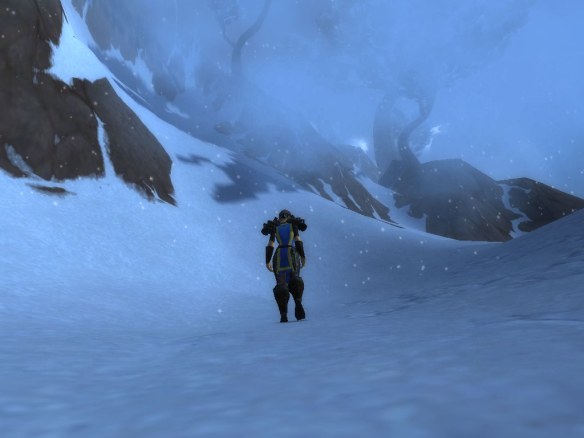 Overall, Kun-Lai isn’t my favourite WoW zone by any stretch of the imagination, but it might be my favourite Mists of Pandaria zone so far.

1 thought on “Into the Mists: Kun-Lai Summit”