This is probably the most difficult review I’ve ever written. There is so much about this game that I love, and so much that I hate, and so much I’m ambivalent towards. And often, I feel all three towards the same feature.

It’s going to be very hard to get all my thoughts out without turning this into a rambling mess, but here goes.

As you probably know by now, Diablo III can only be played online. This caused a lot of controversy pre-launch, and now I understand why.

Launch day was bad. There’s just no two ways about it. Personally, I didn’t get to play at all until the day afterward. And servers remained unstable for the next several days. 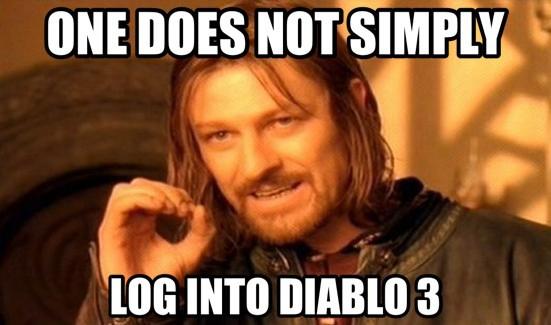 By now, the rough spots seem to have been worked out, but the game will always be somewhat unreliable. Servers will go down for maintenance, and if you don’t have a solid internet connection, you’re pretty much screwed.

On a related note, server instability isn’t the game’s only technical problem. It’s probably the buggiest I’ve ever seen a Blizzard game. The auction house, in particular, is a train wreck. Your chances of it being fully functional when you log on seem to be significantly lower than 50/50.

I also really enjoyed the part where the game bugged out and spawned a boss twice. Hello, repair bill!

But when the game is actually working, it can be quite fun.

I’ve got the power! 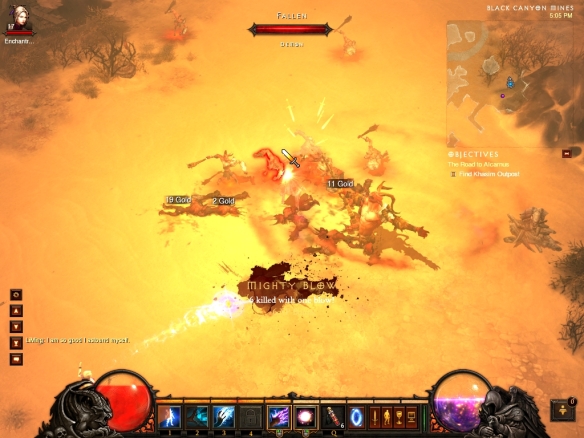 If you want a game where you wield godlike powers, D3 is the game for you. Every class is oozing absurd power, further bolstered by the game’s ridiculous gore and ragdoll physics. (It’s rainin’ heads! Hallelujah, it’s rainin’ heads!)

Each of the game’s five classes — barbarian, monk, wizard, demon hunter, and witch doctor — carries its own unique flavour of overpowered. Myself, I chose the boundless arcane fury of the wizard.

Aside from the increase in power, the classes in D3 are designed much differently from their predecessors in the franchise. Whereas before skills were unlocked by the player via irreversible assignments of skill points, all abilities are now unlocked automatically, and you can change which ones are active at any time for no significant penalty.

For greater customization, you can also modify your abilities with runes, which also unlock automatically. Some of these are just straight damage increases, but others turn an ability into something completely different. 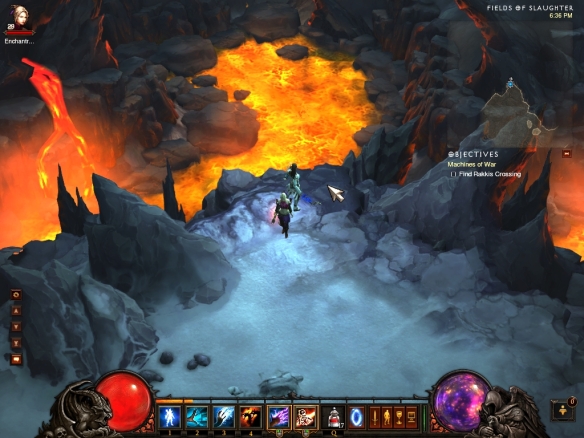 This system is perhaps the greatest triumph of Diablo III. Whereas build experimentation was nearly impossible in Diablo II, it is now highly encouraged. I found my build evolving to the needs of the situation more and more as the game progressed.

Abilities that I had never used before sometimes turned out to be crucial to defeating certain bosses. I found it very rewarding to come back from a crushing defeat with a different set of abilities and cruise through an encounter that had previously seemed impossible.

And it’s a good thing you can experiment with your abilities so much, because the game would get very repetitive otherwise. Slaughtering demons by the thousand is a lot of fun, but it gets old surprisingly fast. 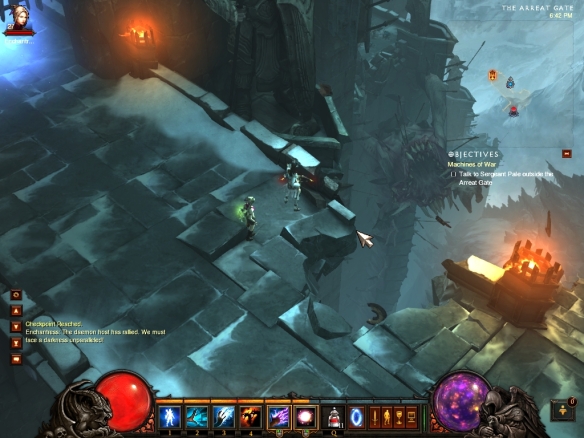 One of the interesting things about Diablo 3 is that almost every aspect of the game is highly randomized: maps, dungeons, loot. Not only are many dungeons laid out differently every time, some of them might not even be available in every play through.

This is a double-edged sword. On the one hand, it makes repeating the game a lot more interesting. It’s different every time. But it can get annoying due to the fact that it not only randomizes every play through, it randomizes every time you log in.

This issue is further exasperated by the fact that you can’t save the game yourself — it auto-saves at sparsely laid-out checkpoints. It is extremely frustrating to be halfway through exploring an expansive dungeon only to disconnect, get sent back to the beginning, and discover the entire map has completely rearranged itself, putting you back at square one.

And the game is expansive. It can take an enormous amount of time to explore every nook and cranny. This, too, can be a double-edged sword.

The plus side is you feel you got your money’s worth — if you paid for the game, which I didn’t. There’s a huge amount of content in D3. The down side is that most of this content has little or no connection to your objectives and ends up feeling pretty pointless. It makes the game and its story feel extremely sluggish, especially in the first two acts. 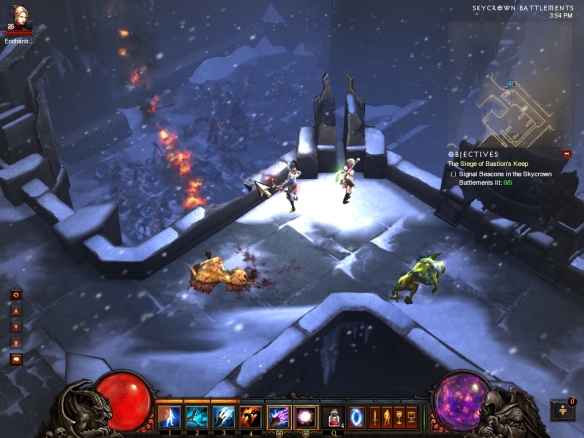 Now, you can skip the optional content, but I don’t think anyone should have to choose between lots of content or a well-paced game.

To be fair, as I implied above, this largely applies to the first two of the game’s four acts. For whatever reason, the latter acts flow along at a somewhat better clip.

In fact, acts three and four are a rather massive improvement over the first two in pretty much every way. The story is much more intense, the environments more interesting, the encounters more engaging…

Again, this is a really hard game to review. Its quality is all over the place in so many ways.

A final double-edged sword is the game’s difficulty settings. It has four, but they must be unlocked sequentially. For each character you make. You can only play a harder difficulty setting once you have completed the previous one on the same character.

This is great for people who like to play one character and stick with it. For them, the game is virtually endless. For people like me who prefer making alts, it sucks. If I ever want a greater challenge, I can only play a character who has already completed the game or wade through easy mode once again.

It also means you will never reach your character’s full potential without repeating the game at least once. I was barely more than halfway to level cap when I defeated the final boss. 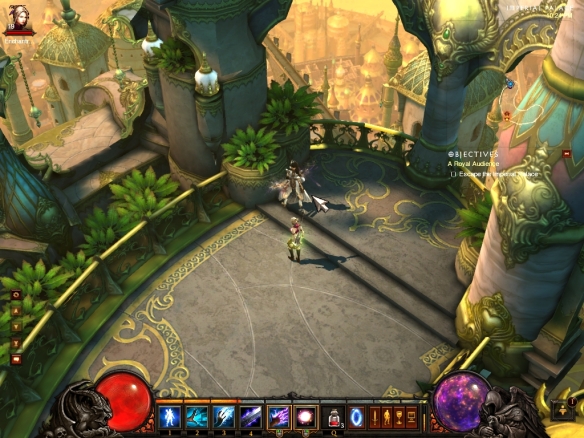 As is usually the case with Blizzard games, the graphics in Diablo III are something you either love or hate. For the first time, I find myself leaning towards the “hate” camp.

I appreciate the “living painting” concept they were going for, but in practice, it usually just makes the graphics look muddy and out of date. There are still some beautiful environments, but they’re beautiful despite the graphical style more than because of it.

The music in the game is beautiful… when you can hear it. Up until act four, the music is so subtle and ambient you will hardly notice it. On the upside, the sound effects are the juiciest and most satisfying I’ve ever heard.

The story is decent — neither Blizzard’s best nor worst work. It’s a bit predictable, and the ending leaves too much unresolved, but I found it engaging.

Similar to Starcraft II, the true strength of the story is the varied cast of likable characters. If you’re like me, you’ll rapidly find yourself becoming attached to them. Which makes it quite heart-breaking when one of them is lost…

There are many more things I wanted to cover — like the incredibly awkward controls, the obnoxious lack of an auto-loot option, or how useful the companion characters are — but this review has already become too long. I will say that I mostly enjoyed Diablo III, but I would not rate it as one of Blizzard’s better games. And in all honesty, I found Dungeon Siege III, a very similar game, to be better in almost every respect.