One of my current writing projects is an article about games that were billed as “WoW killers.” The fact that WoW is still the biggest MMO on the market by far should tell you how successful they all were. But it did get me thinking about WoW’s future, something I hadn’t really done much before.

No, I’m not talking about Mists of Pandaria. I’m not even talking about the expansion after DrunkenPandaLand. I’m looking way, way ahead. Decades ahead.

WoW cannot continue to be the king MMO forever — at least, I don’t think it can. But it will probably continue to be for quite a long time, and even once it is dethroned, Blizzard will keep it going for as long as there’s any money to be had from it.

Consider that EverQuest, which was toppled from its place atop the MMO world ages ago, is still going. They released their 18th expansion not that long ago. Ultima Online, even older than EverQuest, still has a small but loyal base of players fifteen years after it launched.

Consider also that Blizzard has always been a company that’s in it for the long haul. Unlike some developers that are only interested in putting out the next big thing (I’m looking at you, Bioware), Blizzard continues to patch and actively support many old games (such as Warcraft III, which is about a decade old now) for years and years.

So taking all these things into account, it seems entirely possible that people will still be playing WoW twenty or maybe even thirty years from now. They’ll likely be playing Titan, Blizzard’s unannounced next generation MMO, even longer.

That’s a staggering thought. I may still be spamming sinister strike when I’m my father’s age.

Do you think you could keep playing that long? It’s frightening to consider, but I actually think I could. Not because of how much I love WoW (I really consider it very middling in quality as a game), but because I’ve been playing Warcraft games for so long that it’s just become part of my identity. I’m Warcraft Guy — I’m sure that’s how my friends think of me. It’s even tied into my career — a good chunk of my writing work has revolved around WoW or other Blizzard games.

Being who I am, I also think about it from a lore perspective. How will the game’s story evolve over that time? I think Blizzard’s been making it up as they go along for most of WoW’s history, but they’ve said they’re now taking the long view of things. Cataclysm, Mists of Pandaria, and the next expansion after it (and perhaps more expansions after that) are all supposed to comprise a single arc.

Dave Kosak,  lead quest designer and prominent member of the lore team, has also been hinting at there being some greater scheme for Azeroth’s destiny: that Azeroth has some cosmic significance, which is why so much crazy stuff has happened to this one little planet. This is already hinted at in-game by Velen’s belief Azeroth will be key to the final war with the Darkness (which, being he’s a Draenei, probably means the Burning Legion).

All this seems to be gradually building to some final, ultimate climax for the Warcraft storyline, but if that is the case, will WoW continue after the final battle is joined? It would be horribly disappointing if the ultimate climax of the WoW universe came and went, and then some new big bad cropped up next expansion, but it’s hard to believe Blizzard would end their cash cow just for the sake of artistic integrity.

How will they reconcile this? Do they really have some vast plan for the future of Azeroth, or are they really just still making it up as they go along?

I suppose only time will tell.

And then there the game mechanics to consider. Will we one day face a point where new players and alts must grind their way to the level cap of 125? Will MMO-Champion be leaking info on the new ilevel 1000 tier 30 sets? Will people be complaining about the OPness of the sea witch (which is the fourth hero class, following the death knight, the titanic herald, and the Chuck Norris)? How will Blizzard solve these problems?

It’s both amazing and a little frightening to contemplate where WoW will go in the years and decades to come. 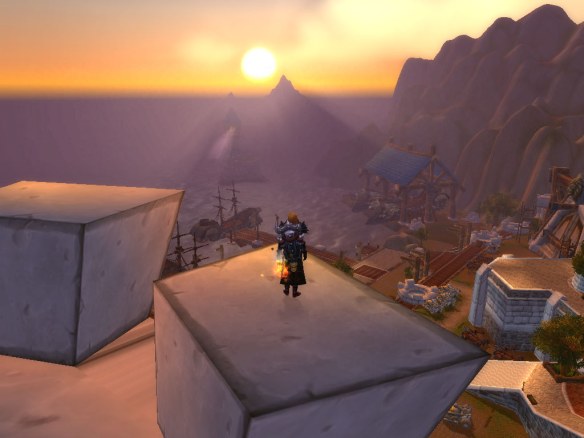 Two more of my articles have been put up on WhatMMO: Top Five MMO Developers, and Six Worst Developer Decisions.

6 thoughts on “WoW: Looking (Way) Ahead”