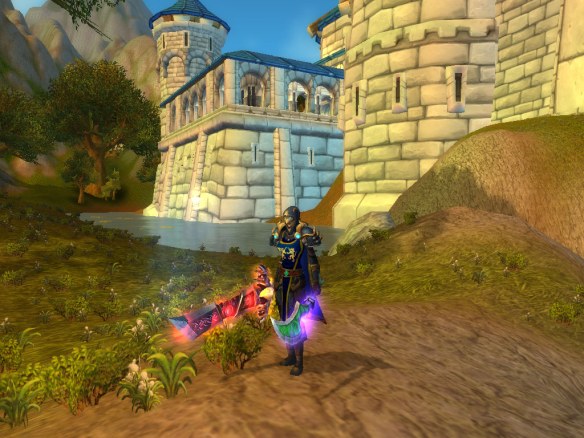 It’s funny. When Blizzard announced transmogrification, I thought, “Well, that’s neat, but kind of pointless.” I figured I’d transmog my rogue and maybe my mage to their leftover Wrath of the Lich King gear and then forgot about it.

But then came the reaction from fans. People were more excited than I’d ever seen them about anything in the game. I saw people come up with dozens of clever, unique, and striking outfits, and then I got infected with the excitement.

Now, I’ve got more sets than I do characters. My paladin has one main set, with slight variations for tanking and healing. 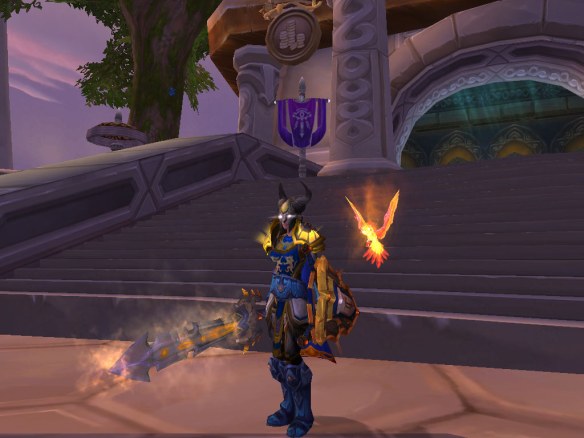 This is the tank version. The healing version is the same but with Lightbringer Greathelm and Lucky Old Sun.

I originally planned to mog my rogue into my beloved VanCleef’s Battlegear, as seen above, but then I got an idea for a lovely “ranger”-inspired look, focusing on green gear, and now I’m grinding Outland heroics for the pieces to it. I’ve already got Mantle of Autumn and the green weapons from Zul’Gurub, and now I just need some legs from Slave Pens and maybe a head piece (if you know of any rangery leather helms, let me know).

I’m torn for my mage, too. I made him a great vanity set back before transmog was even announced (he’s a Blood Elf; he needs to look good), but I also really love T11 and found that Keleseth’s Blade of Evocation matches it perfectly. 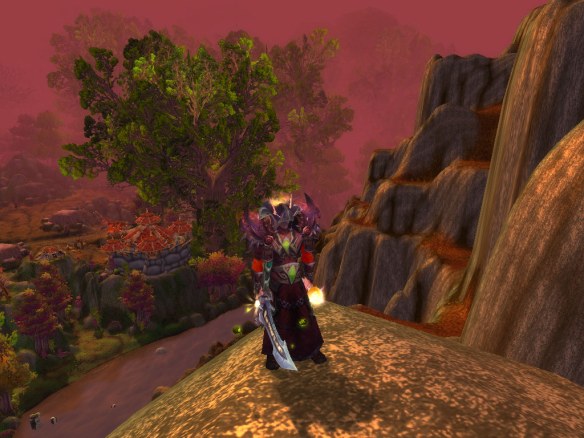 Maybe I’ll just switch between sets, though that’d be a hassle and costly. Maybe I’ll have to pick and choose. On the plus side, it’s giving me something to do until 4.3 drops. I’m also working on sets for my warlock and shaman, which are still works in progress.

The Dire State of Raiding:

According to a new survey done by MMO-Champion of the number of characters clearing normal mode Firelands, very few people have beaten the Firelord, even weeks after the instance was given a brutal 25% across the board nerf.

You can click the link if you want the exact numbers, but to make a long story short, they estimate 5% of the game’s population has killed Ragnaros.

Now, take this with a grain of salt. They surveyed characters, not players, so the fact that many of the toons not completing it may have been glorified bank alts could mean more people have actually done Firelands, and the fact that many of those toons completing it could have been alts could mean that many fewer people have actually done Firelands.

That said, I think this is still strong — if not necessarily conclusive — evidence that Blizzard’s nerfs are not succeeding in getting people to see the content. Even if four times as many people have killed Ragnaros as this indicates, that would still leave a whopping 80% of players who haven’t.

These numbers don’t upset me, or even surprise me. It just proves what I already knew: the raiding system in this game is seriously screwed up. We can only hope the Raid Finder provides a lasting solution to the problem.

I just got my first novel rejection letter from a major publisher. Yay me.

4 thoughts on “Transmog Addiction, the Dire State of Raiding, and Becoming a Real Writer”