Moving on to the second half of my binge watch of the first season of Killjoys. Once again, there’s probably gonna be spoilers.

A legendary Killjoy has stolen something of incredible value to the Company, and the race is on for the other Killjoys to find him.

Dutch finds herself torn between conflicting loyalties. “The warrant is all,” but this particular Killjoy was a friend and mentor to her, and the other major figure from her past, Khlyen, has an interest in what was stolen.

“One Blood” is a pretty good episode overall. There’s more going on than usual in Killjoys, and there’s a nice intriguing mystery to it.

As far as character development goes, it’s a bit of mixed bag. I’m starting to get a bit more interested in Dutch and her dark past, and seeing the team unifying to help her at the end was a very nice moment, but the fact that they just handed over the terrible superweapon to the Company is kind of hard to swallow. I kept expecting them to “accidentally” destroy it, but apparently Dutch and her team are of much looser morals than I had given them credit for.

Also, yay for seeing Ian Tracey again, even if it’s a small role.

This had the ingredients to be a very good episode, and in some ways it was, but there’s also a lot wrong with it.

The team finally succeeds in tracking down the doctor who scrambled D’avin’s brain (played by sci-fi legend Amanda Tapping, which is awesome) and learning the truth of why he murdered his squad, but the doctor is not without ways to keep her secrets safe.

This is a very intense episode, and I like that about it, but unfortunately most of the drama comes from the incompetence of the protagonists, and that kind of takes the edge out of it all. It’s painfully obvious Dr. Jaeger is up to know good, and yet they just leave her unsupervised for hours at a time. These are supposed to be elite agents?

On that note, also, I find it hard to believe that with all their fancy RAC toys, Dutch still didn’t have a better way to disarm D’avin than to shine a light in his eyes and hit him with a box.

Nor am I entirely pleased that Dutch and D’avin are now apparently an item. Gods save me from the endless tide of forced romantic subplots.

It’s also a little unfortunate that D’avin’s mysterious past has been wrapped up so quickly, as it was easily the most interesting part of the show up until now. I guess that’s one of the problems with Killjoys; it’s not quite an arc-based show, and it’s not purely episodic, either. It’s occupying some uncomfortable middle ground where each individual episode’s plot isn’t quite a satisfying package on its own, but there isn’t really a main plot thread flowing through it all to become invested in.

Johnny puts on a good performance, at least. He’s felt kind of faceless for most of the series to date, but he seems to be settling in as the lovable heart of the team, a Samwise sort of character. I can dig that.

Johnny contrives to patch things up between Dutch and D’avin by sending them off a warrant that will force them to spend some time alone, but while they’re away, he finds himself caught in a hostage situation during a deadly acid rain storm.

I really could have done without the ongoing drama with Dutch and D’avin, but Johnny’s story is actually pretty good. The hostage situation itself is pretty by the numbers, but it’s an excuse for some great performances by Johnny and Dr. Pawter.

I gotta say, I enjoy learning more about Pawter. I like her character. Well, “like” maybe isn’t the right word, but she’s fascinating. Like a car wreck — you just can’t look away.

Johnny is also on the fast track to be my favourite character on this show. While this episode further establishes him as the heart of the team and someone who will always put others ahead of himself, he also has the opportunity to be pretty damn badass. A strong showing all around.

This is my favourite episode so far, but it’s still not without its hiccups.

Using a reverse-engineered neural link, Dutch is finally able to track down her twisted mentor Khlyen, and what she discovers is shocking: He’s a high-ranking RAC officer.

Breaking into the RAC is nigh-impossible task, but Dutch and the team are determined to finally get some answers, so the mission is on.

Khlyen working for the RAC — or perhaps, more frighteningly, the RAC working for him — is an excellent twist and by far the most interesting development in the show to date, and I’m also intrigued by the second mention of “Red 17,” whatever that is.

Also, normally I complain about the soundtrack on this show, and on principle I still dislike hearing loud contemporary music blaring in the middle of a far-future sci-fi… but for July Talk, I’ll make an exception. Definitely didn’t expect to hear one of the best Toronto rock bands in Killjoys, but I won’t complain.

However, “Enemy Khlyen” does suffer from a bit of what I like to call a Voyager ending, where all the tension just dissolves for an illogically hasty resolution in the final minutes. Seemed like both Dutch and Khlyen just kind of gave up and stopped trying for no apparent reason at the end.

To be honest, Killjoys mostly failed to impress me through its first season. It’s been good enough, but never more than that. In my mind, the word “mediocre” is closely associated with the series.

Credit where credit is due, though: This is a pretty damn good season finale.

Events in the Quad have reached a boiling point. The Scarback monks have been framed for a brutal terrorist attack, and the Qreshi nobles plot to end their Westerley problem once and for all. While Dutch and the team want to focus on Khlyen, they can’t help but be drawn into the rapidly escalating political situation.

This is the most intense episode yet, and I was really amazed by how dark things got in the end. I admire a story that can shock us out of our lethargy, and this certainly has (even if said lethargy was induced by the lackluster nature of Killjoys to date).

Once again, we see what a master manipulator Khlyen is, as he once again manages to get Dutch right where he wants her without her suspecting a thing. Johnny continues to surprise with his quick wits and big heart.

However, it’s still not quite perfect. Too much of the drama still hinges on the incompetence of the protagonists. D’avin pretty much walked straight into Khlyen’s arms, and the Qreshi coup couldn’t have happened if Dutch and the team hadn’t handed over the genetic bomb earlier in the season.

Also, these world-shaking events seemed to sort of come out of nowhere. I can’t say there wasn’t foreshadowing, because there has been, but things escalated very, very quickly and with little warning. I was still trying to get a handle on the fundamental geographic, cultural, and political layout of the Quad, and already the whole thing is tearing itself apart.

You know what Killjoys needs more of? Info-dumps. As writers we’re warned to avoid info-dumps, and yes, they can often be tedious and off-putting, but they’re also often necessary. One season in, I still have a lot of very fundamental questions about Killjoys and its setting that are unanswered. 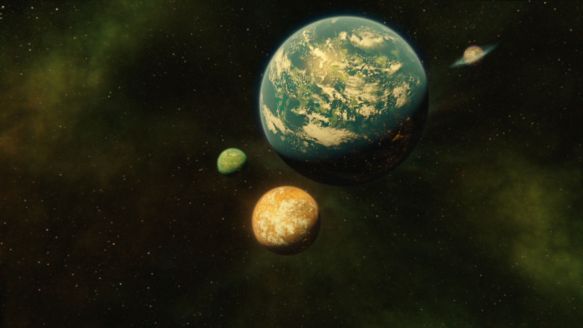 When is this? What, if any, is the Quad’s relationship with the rest of the universe? Where’s Earth in all this? Why was the Quad settled? What is the Company and how did it come to control everything? I could just keep going.

Dark Matter did something similar, but its strong character focus carried the story, and by the time they got into big political events, they’d had plenty of time to flesh things out.

Still, “Escape Velocity” remains a very strong episode. In fact that’s a large part of why these questions are nettling me. The reason I haven’t brought them up before now is that up until “Escape Velocity” I simply didn’t care. Now I do.

Thus concludes season one. Unfortunately that’s all Crave has right now, and I’m not impressed enough to buy downloads from Google Play or iTunes, so my reviews end here for now. The season finale was impressive enough that I would like to see more of the show at some point, though, so I’ll try to keep an eye out. I expect they’ll add season two sooner or later.