I had been planning to spend this past weekend playing Overwatch during its free event, but I grew bored with it in record time. Not wanting to start another storyline in The Old Republic just yet, I looked to other options. 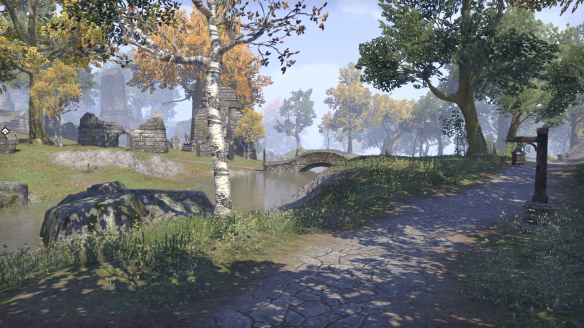 And then I saw the huge ad for Elder Scrolls Online on my Steam homepage, looking all sexy and winking seductively at me.

I’ve often talked about returning to the game, but this sure isn’t how I expected it to happen.

They were holding a big sale on cash shop currency, so I decided to buy a recustomization token and tweak my character’s appearance. I had long planned to change her hairstyle, but I wound up adjusting her face a fair bit, too.

When I started playing, I knew almost nothing Elder Scrolls lore, and I had no idea what sort of person my character would be, so I defaulted to my go-to of a serious, militaristic character. But now I know a lot more about Bosmer, and a stern-faced, disciplined woman didn’t seem to fit anymore.

I came to view my character more as a darkly playful trickster. She’ll greet you with smile, and she’ll eat you with a smile.

So now she has loose hair and softer, friendlier features. I also made her a little shorter, because now I know Bosmer are supposed to be tiny. I think she might still be a little on the tall side for Bosmer, but she shouldn’t be head and shoulders above her own people anymore. 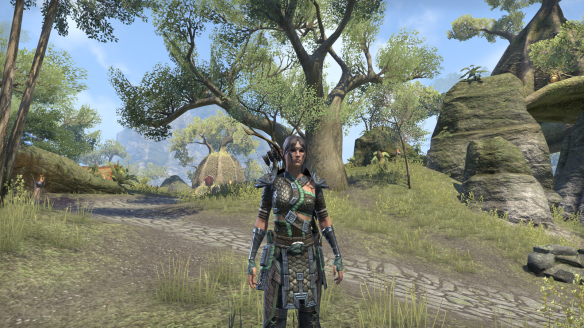 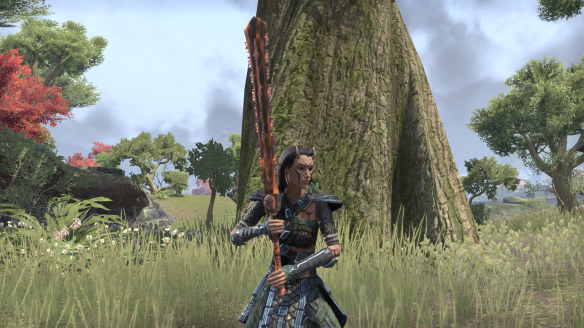 Also horns because why not.

The lack of a wardrobe system still rankles me quite a lot, though. I love the outfit I have now, but I’m going to outlevel it soon. That’s honestly been one of the things holding me back from playing more. You can get costumes in the cash shop, but the selection is woefully inadequate; apparently the developers regularly remove outfits, which seems very wrong-headed.

I did grab one costume that’s okay, but it doesn’t quite fit her barbaric aesthetic. At least it shows off her tattoos.

As MMOs are wont to do, the game has changed a bit since I played last. One nice thing is that you now get additional skill points for leveling up, so I had a bunch of points to spend upon logging in. I always did feel starved for enough skill points to do everything I wanted to, so it’s quite welcome.

But of course the big change is One Tamriel, which has united the world with universal level scaling (both and up and down, which is a rarity) and relaxed faction barriers.

Theoretically I think the level-scaling is a great idea, but in practice I don’t see it affecting me much. It seems to be of more benefit to people who are already far-progressed in the game. Yes, I can jump ahead to high level zones now, but why would I want to? Might as well keep playing through the story. 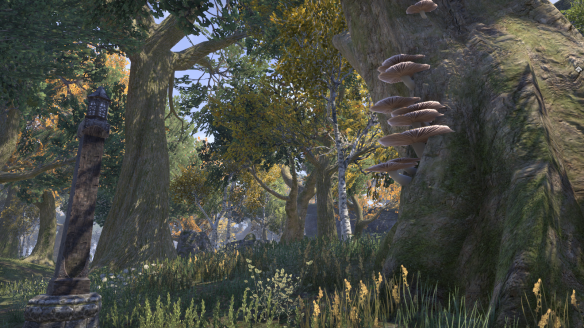 The faction changes are a little more interesting. Just for the novelty, I decided to hop on my horse and spend a few hours sightseeing in some of the zones for the other two alliances.

I’ve always felt the graphics in ESO were overrated, but after visiting Glenumbra, I’m not so sure anymore. That zone is gorgeous. I’m an Aldmeri loyalist to the end, but that place is far nicer than any of our zones.

Meanwhile, the Ebonheart Pact zones are… interesting. I had written Elder Scrolls off as purely low fantasy, but then I got to the Dunmer zones and it’s all giant mushrooms and ash raining from the sky and glowing fungi and floating brain-tentacle monsters. It’s definitely a change of pace.

I also made a point to visit the capitols of the other factions. That’s one thing the Aldmeri definitely win. The Covenant capitol is barely distinguishable from any other random town, and while the Pact city is neat, it’s nothing compared to Elden Root.

Of course, like any self-respecting Bosmer, I made a point to grab some “souvenirs” from the palaces of both rival factions. I had a terrible misunderstanding involving a lockbox in the Pact council chambers and several heavily armed guards, but I somehow managed to escape and proceeded to flee north across Dunmer territory. 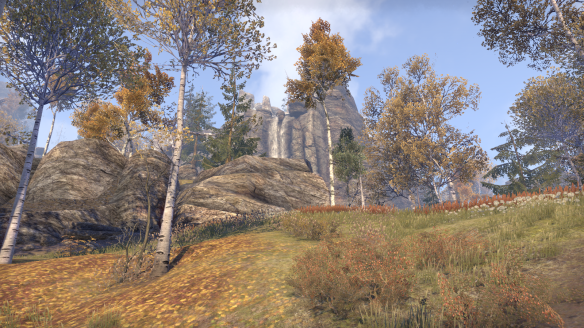 When I logged off for the night, I was camped out in the woods of eastern Skyrim, waiting for the heat to die off. It’s another lovely zone, actually — not a bad place to be stranded, as these things go.

I enjoyed revisiting Elder Scrolls Online. It’s pretty rare for a game to be able to hold my attention without constant action and/or gripping story, but I just gladly spent several hours doing little but sightseeing. That says something.

Of course, the biggest reason I stopped playing wasn’t that I didn’t like it. I stopped because I didn’t have time, and with many other games currently demanding my attention, that’s still true. I might make more of an effort to carve out some time for it here or there, though, and I’d still like to sit down and really delve deep into the game at some point. If I can find the time.

1 thought on “ESO: A Jaunt through One Tamriel”