I’ve starting to feel a little burnt out on the Old Republic lately, so for the last week or so, I’ve been playing a lot of StarCraft II’s co-op missions for a change of pace. I’m once again struck by how fun they are, and I picked a good time for it, as Blizzard has also just released a major patch with a lot of new additions for co-op, including everyone’s favourite gene-splicing slug as a playable commander.

I’ve been trying to think of a good analogue to compare SC2’s co-op missions to, and I’ve realized I don’t have one. That’s not to say they’re wildly unusual, but I’ve not encountered anything exactly like them.

Usually my experience has been that RTS games have their single-player campaign (my favourite part), and competitive matches, and not a whole lot in-between. At best they might have versus AI skirmishes, which are usually meant as training before you step into PvP.

Co-op missions are somewhat unique in that they aim to have all the endless replayability of PvP, while being a purely co-operative, versus AI experience.

And they do a damn good job of it. Co-op missions do play more like the campaign than anything else, but they’re also highly replayable.

They achieve this through having semi-randomized elements, a number of different missions (although admittedly not as many as I’d like) with unique objectives, and even the fact you’re matched with other players, who may not exactly match your skill level. 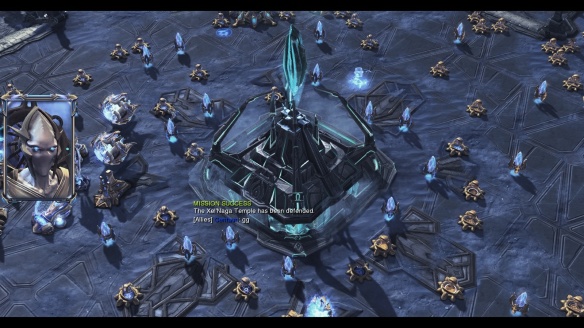 I still very much wish that I had a friend I could play co-op missions with regularly (I do have one friend who plays StarCraft, but she’s usually too busy), but playing with PUGs is still plenty fun.

The very unreliability of other players is in a strange way sort of fun. The other day I had a run of really bad partners, but that added its own special thrill. I came to think of it is just another challenge to overcome, and honestly, I really like carrying people. It feels good to help people achieve victories they might not otherwise be able to, and it appeals to my vanity.

It also helps that the StarCraft II community tends to be a fair bit more pleasant and respectful than most gaming communities (not that it’s a high bar to clear).

The final piece of what makes co-op so replayable is the sheer variety offered by its many commanders.

Take, for example, the three Protoss commanders currently available. Obviously they’re all the same race, but they all play very differently. Artanis is the Protoss of all Protoss, building armies of big, slow, powerful units that streamroll everything in their path. Vorazun is the rogue archetype translated to the RTS genre, leaping from the shadows to assail her enemies with crippling crowd control and units with devastatingly high damage. Karax… well you’re basically playing tower defense with him.

And that’s just the Protoss commanders. Obviously the representatives of the other races provide even more diversity. There’s even decent variety within each commander’s toolkit, with most having at least a couple of different possible builds/strategies.

Vorazun remains my preferred commander. Her units have devastating power, and she has relatively little emphasis on macro, which I like. She also feels very well-rounded, without major drawbacks. Sometimes I wonder if she’s overpowered. Does it even matter if something is OP in co-op?

To revisit the above topic, she’s also a great commander to pick up the slack if your ally is lagging. Nothing makes you feel awesome like bouncing around the map, throwing down black holes and time stops and warping in clutch reinforcements to save your ally’s base and win the objective all at once.

I’ve gotten to level fifteen on Vorazun and started on mastery levels (more on that later), but I’ve also been branching out a bit. I’ve been playing Artanis and Zagara with some regularity, and I’ve started on co-op’s newest commander.

Yes, Abathur is here. Somewhat interesting because in beta I believe Stukov was hinted to have been the third Zerg commander, but much as I like Stukov, I think Abathur is probably a better choice. Everyone loves Abathur. 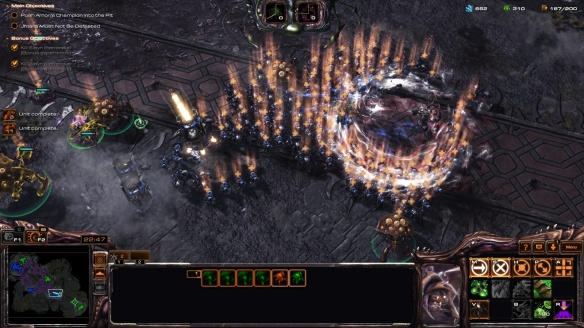 Abathur is a paid DLC, but he only costs $5 US, which is reasonable in my books. I had no problem buying him right off the bat. Partly because I genuinely wanted to play him, but also because I want to support the co-op feature.

Normally, Zerg is all about churning out huge numbers of fast, cheap, disposable units. You just keep the flood coming and win through sheer attrition.

But by Zerg standards, Abathur’s units tend to be big, slow, and expensive. His armies are slow-moving juggernauts, having more in common with those of Artanis than, say, Zagara.

This impression is further reinforced by Abathur’s core mechanic: biomass. All enemy units drop biomass when killed, and Abathur’s combat units can collect it to grow more powerful. If they consume enough biomass, they will eventually evolve into an ultimate form. Ground units become brutalisks, and air units leviathans.

This further encourages Abathur to keep his units alive for as long as possible. Losing a unit costs you not only the resources you spent on creating it, but all the biomass they’ve collected.

The good news is that Abathur’s units tend to be pretty tanky, and he has access to a lot of healing. Late-game, his armies are probably the hardiest of any commander.

My general experience has been that Abathur is quite weak in the early game, but an unstoppable force once he gets going. He also has fairly weak anti-air and mobility, but I think that’s a worthwhile trade-off for his other strengths.

My recommendation would be to lean heavily on toxic nests for defense early on. Try to focus all your biomass into one unit to begin with so you can get your first brutalisk as soon as possible. Play greedy and fast tech until you’ve got your expansion and swarm hosts with the anti-air upgrade. After that, you’re on easy street.

I’ve been making three vipers to evolve into leviathans, but otherwise I pretty much ignore air units. Abathur actually has a very good air units, but it takes a lot of time and resources to get them, and a ground army works fine.

Finally, I’m intrigued by the implications of Abathur being a Zerg commander without a hero unit. I hope this means we may start to see commanders of other races that do have hero units. I love heroes, but Zerg has always been my least favourite race (although Abathur and Zagara are changing that a little).

I could definitely see Nova being a hero unit if they add her as a commander. That would be sweet.

Abathur isn’t the only big co-op addition brought by patch 3.3. Blizzard has also expanded the mode with mastery levels and weekly mutations.

Mastery levels are very similar to Diablo III’s paragon levels. Once a commander has reached level fifteen, any XP earned begins to count toward mastery levels, each of which gives you points to spend on various incremental bonuses. Mastery level is also shared between all level fifteen commanders.

Mastery leveling seems surprisingly fast — I’m already level nine after the weekly mutation and one regular match — but it’s certainly an improvement over having no progression at all after level fifteen.

Meanwhile, weekly mutations are similar to the brawl modes of Hearthstone and Overwatch. They spice up the gameplay with new and strange challenges and complications. Though this being StarCraft there’s less of any emphasis on wacky off-the-walls mechanics and more on finding new and creative ways to challenge the players. 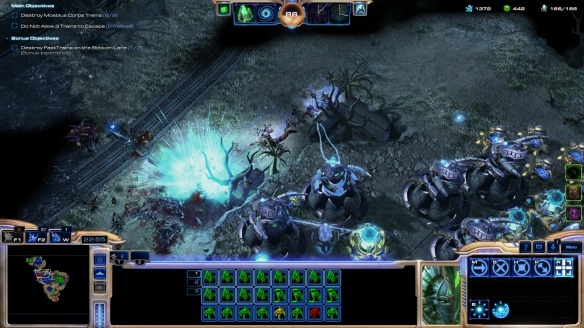 The first one has as its main mechanic zombies that spawn randomly across the map as well as when any enemy unit dies.

Fun idea, but it proved a lot less challenging than I expected. To be fair, I did have pretty much the ideal composition for such a scenario: Vorazun and Karax. My ally turned our bases into invincible death fortresses that obliterated anything foolish enough to venture too close, and my dark templars’ Shadow Fury just instantly melted any zombies I encountered.

Completing a mutation grants a huge chunk of bonus experience, but only once per difficulty per week (completely a higher difficulty also awards any bonuses from the lower difficulties). So there’s not much cause to do the mutation more than once a week.

On the whole, mutations are probably the most underwhelming aspect of the patch, but I’d still rather have them than not.

One final small but welcome change is that there is now an XP bonus for your first co-op victory each day. Good way to keep people logging in.

This also feels like a good time to mention that StarCraft II is actually largely free to play, though this fact is very poorly advertised. As far as co-op goes, the only limitation is that free players can only play as the basic commanders: Raynor, Kerrigan, and Artanis.

They’re not any less powerful than the others, just less mechanically complex. Artanis is my personal recommendation for total newbies. You can win most things just by making a giant army of dragoons and a-moving.