There’s been a fair bit of news on the Heroes of the Storm front recently. It’s not often I have enough to say about Heroes to fill a whole post, but this time, the Blizz gods have provided.

Ranked revamp and season one:

The biggest news is that Heroes’ lengthy pre-season is finally coming to a end in June. The start of season one will bring a new ranked system similar to StarCraft II’s, with leagues ranging from bronze to grandmaster.

I don’t play ranked much, so this doesn’t make a huge difference for me, but I’m glad it’s coming for those who care about such things. I also like that end of season rewards will be based on highest rank achieved rather than your rank at the end of the season. Lower stress that way; encourages you to strive to the best you can without worrying about losing your current rewards.

Speaking of rewards, I’m also excited to learn that preseason will also have its own set of rewards once it concludes. My reward tier will grant me 2,500 gold, an elemental wolf mount, and a unique portrait, which is pretty sweet. Even if I already have more gold, mounts, and portraits than I know what to do with…

The other news is less positive.

The next two characters to join the Nexus will be Chromie, an assassin, and Medivh, a specialist, and I can’t say I’m happy with that.

Now, these are both characters that I like, though they’re not exactly favourites, but they don’t seem like good additions right now. We really don’t need any more Warcraft heroes at the moment, nor more assassins, and we definitely don’t need more Warcraft mages. 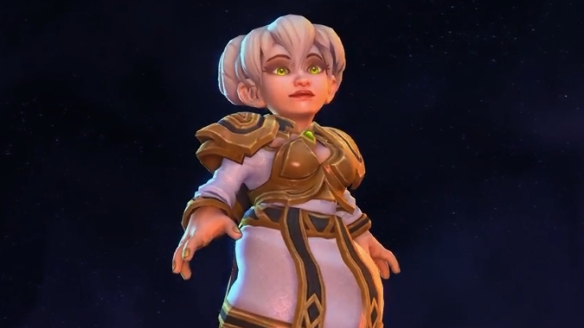 Heroes already has three mage characters, two of them from the Warcraft universe, and they’ve dominated the meta basically forever. Meanwhile, we still only have one Diablo angel, and we’ve only gotten one (underwhelming) StarCraft hero since autumn.

To be fair, Medivh at least looks like he’ll have an interesting playstyle. Looks like he’s going to be almost all utility — portals, crowd control, and the like — and that’s fairly unique. Chromie is just another bursty skillshot-based assassin, though.

Meanwhile, Overwatch’s Widowmaker has been announced… as a legendary skin for Nova.

I’m not often unhappy with the decisions Blizzard makes in regards to Heroes of the Storm, but this is definitely one of the exceptions.

The end of April saw the hotly anticipated release of Tracer in Heroes of the Storm. Having been let down a little by Overwatch itself, I was super excited to player Tracer in Heroes, and I bought her as soon as she went up for sale.

But it seems I’m just destined for disappointment where Overwatch is concerned.

It’s not that she’s bad. She’s pretty strong actually, though I think tales of her OPness have been greatly exaggerated.

It’s just that she’s not very exciting to play. Nothing she does feels impactful. She just dances around, whittling people down with her “death by a thousand cuts” auto-attacks. Even her ultimate is underwhelming.

So I pretty much just lost interest in Tracer after I got her to level five for the gold bonus. I guess I’ll have to wait for Pharah or D.Va if I want my Overwatch fix in Heroes, and that’s assuming they turn out well.

I suppose the good news is I don’t have to fit yet another assassin into my roster. I’m already juggling Jaina, Lunara, Nova, and Li-Ming, and I also like to dabble with Thrall, Illidan, and Valla once in a while.

Also, for a girl who spends so much time talking about the Cavalry, you’d think she’d know how to ride a horse. I mean, this isn’t half as bad as making Li-Ming’s sidesaddle, but what the Hell?