As gamers, we don’t have a lot of ways to make our voices heard by publishers and developers. We can try posting on forums, but unless it’s an indie game, we’re just one voice among many thousands, and what we say will count for little in the eyes of the developers — if they’re bothering to listen at all.

That leaves voting with our wallets as the only reliable way to make our opinions count, at least in most cases. If a game company makes decisions we don’t agree with, we move on and take our money with us.

But is that ever really worth it? Are we sending a message, or only hurting ourselves?

The best example I can think of is the group of people who flatly refuse to play Diablo III because of its always online nature (which, for the record, I agree is bad).

I’ve never quite grasped the logic of this. “I’m upset that I will only be able to play this game 97% of the time, therefore I will play it 0% of the time. That’ll show ’em.”

It just seems like cutting off your nose to spite your face.

And it’s a real shame, because the people who refuse to play D3 for this reason are missing out on what has evolved into a very good game. Living your whole life without experiencing the joy and wonder of Covetous Shen is simply tragic. 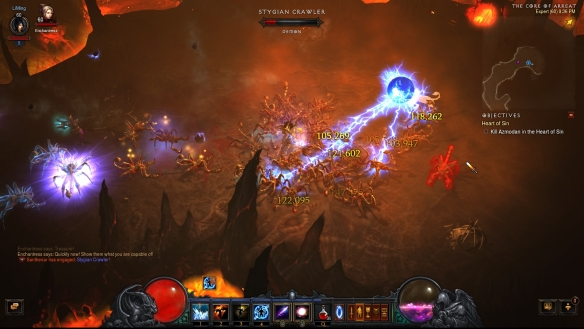 There are also those who refuse to have anything to do with Steam because it is technically a form of DRM. I can only imagine the self-inflicted Hell that trying to be a PC gamer without Steam is in this day and age.

And it really doesn’t seem to be making difference. Steam is an unstoppable institution, and Diablo III is one of the highest selling video games of all time.

I’m not entirely immune to this myself. I avoided playing World of Warcraft for most of the Warlords of Draenor expansion in protest over many poor decisions, most notably the lack of flying, and I’ve refused to touch Star Wars: The Old Republic due to its atrocious free-to-play model despite kind of wanting to see how the Imperial agent storyline plays out.

And neither of those decisions has done much good, either. Blizzard did step back from the removal of flight, and that might have been due to the mass subscription losses WoD suffered, but the WoW community is of such scale my own contribution to that, if any, must be minuscule to the point of irrelevance. SW:TOR, too, continues to enjoy great success despite the endless (and justified) hate its business model receives. The Star Wars IP is a license to print money.

Those were both easy decisions, too. I didn’t have much interest in Warlords of Draenor in the first place, and class story awesomeness aside, my feelings on SW:TOR have traditionally been lukewarm at best. Obviously, if you’re just not enjoying a game, it makes sense to stop playing it.

But what happens when there’s a game you really want to play despite having some big objections?

The Empire and the Legion:

This has been on my mind lately because I find my “principles,” such as they are, are coming into conflict with what I want to play, and again, it comes back to WoW and SW:TOR.

Despite myself, I’m getting somewhat excited for Legion. It’s not all good news, but there’s a lot of stuff coming that interests me, and if nothing else, I think it can at least return to WoW’s traditional two steps forward, one step backward approach — as opposed to WoD’s “two steps backward then three into the ditch and flail around like a beached whale” approach.

But I’m still pissed about flying. I consider it a core feature of WoW at this point, so not having it in at launch basically means the expansion will be launching unfinished. I generally make it a policy not to pay for unfinished products.

Similarly, as I’ve discussed in previous posts, I really like what I’m hearing about SW:TOR’s Knights of the Fallen Empire expansion, and despite my ambivalence towards Star Wars in general, I’m really tempted to give the game another shot (third time’s the charm, perhaps). But I really don’t want to support such a miserable business model.

In either case, I’d feel like an awful hypocrite if I wound up paying for the games despite all my moaning and loud criticisms.

At the same time, I don’t want to be like those people refusing to play Diablo, missing out some potentially good fun by clinging to stubborn pride. I can’t escape the feeling that I’m really only punishing myself.

I am also reminded that I have always been very conscious of the non-homogeneous nature of game companies. You may dislike the actions of one aspect of a company, but that doesn’t have to reflect on all of it. Do the writers at Bioware deserve to be punished for the awfulness implemented by the bean counters? I may have little love for WoW’s big hat designers, but their art and music departments are definitely worthy of my support.

In case it isn’t clear, I haven’t yet come to a firm conclusion on this matter, and I can see strong arguments either way. You don’t want to be a doormat as a consumer, but it doesn’t necessarily make sense to deny yourself a fun game based on some matter of principle. I imagine where the line is to be drawn will vary from person to person. I’m not even sure where it’s drawn for me yet.

I’d be very interested to hear the thoughts of any readers on this matter.

And before anyone else brings it up, yes, I know I’m overthinking this. It’s kind of my thing.

3 thoughts on “Gaming: Is It Worth It to Stand on Principle?”