Recently, I did a post running down my opinions on the very best examples of major MMO features from across the industry. But I am not all smiles and sunshine. I’ve also encountered plenty of bad design, obvious mistakes, mediocrity, and bitter disappointment.

Today, I’ll be looking at the worst failures of the MMO industry.

As before, this is a subjective list and should not be viewed as totally definitive. I know some of these choices are bound to be controversial.

I don’t think traditional MMO questing is as tedious or unpleasant as some do, but certainly there’s a lot of mediocrity out there. However, there are two games I’ve played where questing is even more dull than the rest.

The first is Dragon’s Prophet. Its questing isn’t really all that much worse than the average, but it is overly repetitive — often sending you to the same place to kill the same enemies multiple times — and the poorly translated quest text makes it impossible to become invested in the story.

The other is WildStar. WildStar’s questing suffers from all the sins of traditional MMO questing — repetitive tasks, long travel times, and so forth — and couples them with a shortage of mobs and items, long respawn times, and an insipid commitment to make all quest text Twitter-length, which destroys any chance for interesting story or immersion and generally makes me weep for the future of humanity.

A special mention also needs to be given to the game’s challenges, which pop up in the middle of quests without warning and require you to complete a task under a time limit. With how much wandering and searching WildStar’s questing takes in the first place, it’s very hard to beat the time limit, and even if you do, the rewards are purely random and may not be at all useful. They’re an exercise in frustration and nothing more.

It pains me to say anything negative about TSW, because it is a truly brilliant game that deserves far more recognition than it’s gotten. However, it’s not perfect, and when it comes to traditional group content, it is a failure.

It’s not even that the content itself is bad. The dungeons are excellent: light on trash with stunning visuals, good stories, and interesting mechanics. I can only assume the raids are of a similar quality, though I’ve never done them and likely never will.

But the systems around the group content are terrible. Firstly, there’s no group finder worthy of the name, so the only way to find a group is to sit in Agartha — the game’s most boring and lifeless area — and spam general chat, potentially for hours on end.

Secondly, while the dungeons technically have three difficulties, really there’s only one: nightmare. Elite mode has no real incentive for repetition, so it’s just something to run once to unlock nightmares, and normal mode is largely useless and tends to be ignored by the players. This means that if you want to run dungeons in TSW but don’t want to sweat blood in the brutally unforgiving nightmare dungeons, you pretty much can’t, unless you don’t mind getting absolutely nothing useful for your character out of it.

And of course because elites are so useless, that makes it even harder to find groups for them.

Scenarios are a bit better, not requiring the trinity and having a wide range of difficulty settings that are all at least somewhat rewarding, but their rewards are fairly specialized, and not everyone likes scenarios. They have no story, which is the main strength of TSW normally.

If you ask me, nearly all MMOs have very bad PvP. But TSW’s is just a little more awful than the rest, so it gets the crown.

I’ve only briefly experimented with PvP in TSW, but it was a miserable experience. Queue times are long, the population is small, and my lifespan tended to be numbered in single digits’ worth of seconds, during which I was usually stun-locked.

Now, no doubt my build and gear were not optimal for PvP. But there’s nothing in the game to give you any idea what does work for PvP, and while not being optimized for PvP is a bad idea in any game, it’s far more crippling in TSW. A PvE player shouldn’t be completely useless in PvP.

The one good thing I can say is that the community is actually halfway decent, which is very rare in online gaming and doubly rare in a PvP environment. But I would still advise you to stay far, far away from TSW’s PvP.

I don’t think the MMO genre is a wasteland of good story as some do, but I will acknowledge there are plenty of candidates for worst story. WildStar has very interesting backstory, but it ruins all that by constantly ramming its forced and immature humour down your throat. Rift is the very definition of bland and derivative. WoW has had some major story blunders. I don’t think Neverwinter is even trying.

But Guild Wars 2 is as bad as it gets. It’s like they tried for a sort of goofy comic book feel like WoW, but fell way short. Instead of delightfully cheesy, it’s just cheesy.

And the voice acting is atrocious, and the dialogue is cringe-worthy, and the plot is rambling and incoherent, and there’s no real continuity… I could just go on and on. GW2’s storytelling is abysmal. You can find better on any random fan fiction forum.

Offering interesting potential for exploration is something a lot of MMOs struggle with, but SW:TOR is just a little worse than most. The maps are narrow, linear, and sterile, and there’s little or no reason to go off the beaten path, even on the rare occasions you can.

I’m told there’s some sort of jumping puzzle stuff surrounding datacrons, and I think there’s a collection system of some sort that rewards exploration, but I never encountered any of this when I played, so either these things are only for high levels or they’re very poorly advertised. Either way, exploration isn’t a significant part of SW:TOR.

As I stated in the “best of” post, I’m not fond of MMO crafting as a rule. Aion edges out the competition for the worst title by having all the problems of standard MMO crafting plus a huge reliance on RNG, with everything having a chance to fail. Even picking a flower can fail, forcing you to start over. And man, does it take a long time for a Daeva to pick a flower, for some reason.

This is bound to be a controversial choice. A lot of people love Rift’s housing for its insane customization potential, and that is cool.

But once you’ve made your virtual dream home, then what? There didn’t seem to be any practical use for housing in Rift, no reason to take time out of questing to visit your home. Maybe one appears later, but the game failed to sell me on why I should care about its housing.

At least in Aion I had a garden where I could grow reagents.

Much has already been written by myself and others on the topic of SW:TOR’s “free to play” model, and I don’t want to repeat it too much. It’s just awful. In every way. It’s the hard sell of all hard sells.

The truth is the free mode is only intended as a trial, and you’re supposed to subscribe, but it doesn’t even work as a trial because the gameplay is so miserable you can’t get a good feel for the game. And even if you do subscribe, you’ll still be constantly nickel and dimed by the cash shop.

SW:TOR is actually a decent game, but so long as its business model remains as is, I can’t recommend it to anyone.

I very nearly gave this to World of Warcarft due to its extremely limited options to customize individual avatars. However, WoW’s plethora of different races does give one a lot of potential looks to choose from, and it is a very old game, so it doesn’t seem entirely fair to judge it based on the limitations of its era. So WildStar gets the nod here. It’s very much like WoW in that your only real choices are race and gender, and there’s no significant customization beyond that. Oh, sure, there are a lot of options for different faces and body types, but in the end, they all look pretty much the same. If you want to play a human female who isn’t a googly-eyed Barbie doll, you’re out of luck.

There’s no excuse for that in this day and age.

Combat: World of Warcraft (but really it’s a tie)

Combat is another area where there’s not a lot of games that are actually bad, but plenty that are mediocre. I don’t think I’ve ever played an MMO where the combat was actively hurting my enjoyment — except maybe Star Trek Online, but it’s been so long since I tried it that my memory is hazy.

I’m gonna give this to WoW because it set the standard, though I could just as easily have picked Rift, SW:TOR, LotRO, or any number of other mainstream MMOs.

It’s not that the WoW system of combat is bad — it’s functional and has some occasional thrills — but it’s incredibly thin and often dull. It’s usually very immobile, it’s visually bland, it requires no real thought, every fight plays out more or less the same, and there’s no challenge at all. Enemies fall dead after just one or two hits. Even on the rare occasions an enemy does present a challenge, it’s more a matter of numerical supremacy than true challenge, and you can faceroll them once you get more levels or better gear. 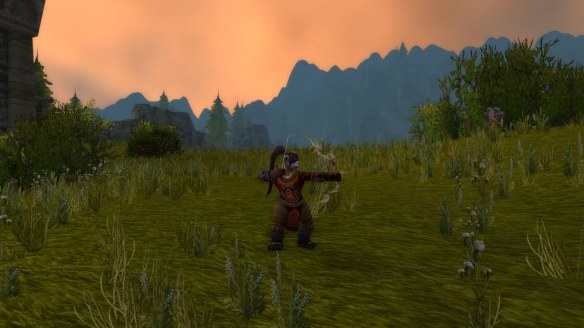 In my more cynical moments, I think people only criticize TSW’s combat because they’re not used to a game where enemies don’t evaporate from a dirty look.

WoW epitomizes all that’s wrong with holiday events in MMOs. They’re carbon copies of real world holidays, which feel horribly out of place in a fantasy world. They never change from year to year. They require excessive grinding for incredibly mediocre rewards. What few rewards are worthwhile are usually locked behind exceedingly low drop rates and mountains of RNG.

No real effort is put into WoW’s events, so they don’t feel like events at all.

8 thoughts on “Worst of the MMO Industry”