The holiday lull is always a good time to get caught up on one’s gaming. In my case, I wound up focusing my attention once again on The Secret World and Heroes of the Storm, enjoying the holiday festivities of both. 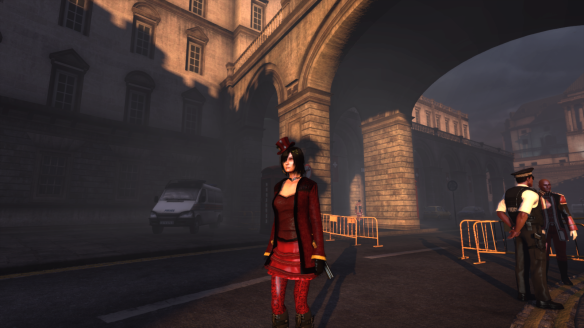 After the home-run that was Halloween’s new mission, I was actually a bit disappointing by TSW’s new addition to the Christmas event. I’m sure it’s a lot of fun if you’re a fan of puzzles and/or opera, but I’m not particularly keen on either, so I wound up finding the mission rather tedious.

A new player begged me for help on the final instance because he couldn’t defeat the mobs, but in the end, he wound up carrying me much more than I carried him, because I never would have solved the puzzles on my own. I just shuffled along and beat up Phoenicians like the trained ape I apparently am.

Also, how many damn times are we gonna have to beat Lydia, anyway?

I decided to simply not repeat the mission, but that presented a problem, because the new outfit is supremely swanky. My only hope was to buy everything I wanted — for all my alts — at auction.

So I wound up selling signets, turning Aurei into augment upgrade toolkits to sell, vendoring green toolkits I’d been hoarding, and basically doing everything to make pax short of turning tricks in Darkside. On the plus side, I made thirteen million pax in the first three days. 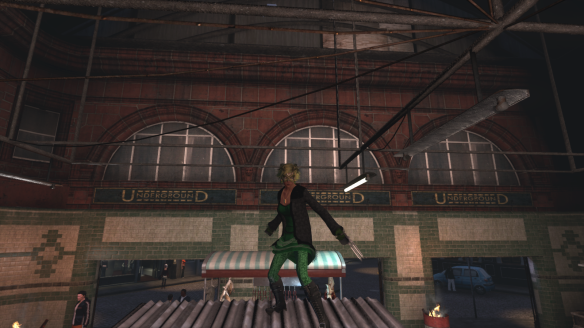 In the end, I got pretty much everything I wanted, and it cost me a lot less than I initially expected, so I’ve ended the event wealthier than I started.

But the event had plenty more to offer. The return of Super Hel and the Mayan Apocalypse is welcome, and I’m very happy they brought back the communal loot bag concept from Halloween.

It’s a great way to bring people together. Sure, you can just dump the loot on the hug-pile that inevitable springs up in Agartha, but where’s the fun in that?

I took mine to Kingsmouth and rounded up a crowd of mainly new or low level players. We had a short impromptu party atop the police station, and one of the lowbies got the zombie polar bear pet, which is the rarest item in this event. It felt good.

And, of course, using the public loot bag earned me the new /dance_single_ladies emote. 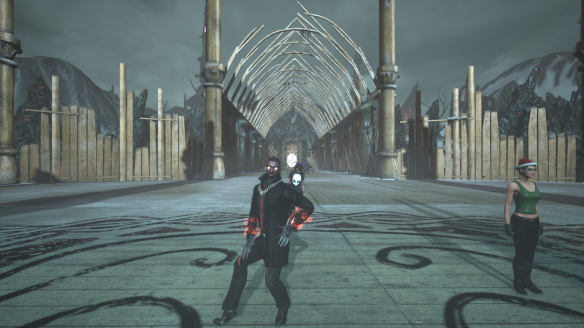 It’s amazing. I mean, I’m no Beyonce fan, but this dance is hilarious. Especially on a male character. Especially with fist weapons equipped.

Speaking of a sense of community…

As has happened in the past, I wound up logging on to join her in her adventures and doing all sorts of random things. I spent much of the time on my latest alt, and the experience proved quite a boon to my fledgling second Dragon.

I was able to mooch free runs through the first three dungeons, which is great because I almost never get to run dungeons in TSW. I was once again reminded of how much I love Darkness War. Epic war, rifts in space and time, and Vikings. What more could anyone want from a video game? 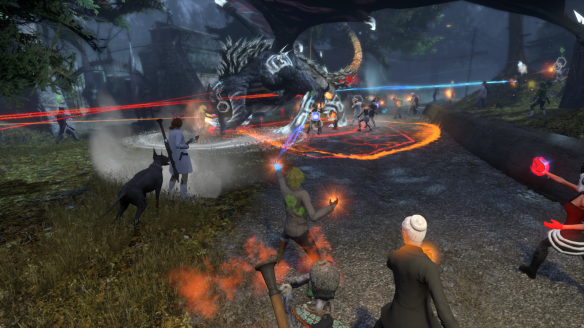 At one point, we wound up killing one of the Vestiges of Nameless Days in the Shadowy Forest. If you want to feel like a badass, spend half an hour running through Transylvania on a character who hasn’t even finished Kingsmouth yet.

EVERYTHING IN THIS ZONE CAN ONE-SHOT ME, AND I DON’T EVEN CARE. TREMBLE BEFORE MY QL1 BLUES.

It’s a bit of a blur after that. I seem to recall a dance party in Niflheim at one point…

With my family scattered to the winds, the holidays can be a bit of a lonely time for me, but a night of virtual Vikings, bad jokes, and drunken songs about Mi-go took a lot of the sting out.

I haven’t been doing many posts on Heroes of the Storm, but I’m still playing it regularly. I just haven’t had much to say about beyond my initial thoughts. I still think it’s a very fun game somewhat marred by an overbearing business model and an absolutely atrocious community.* 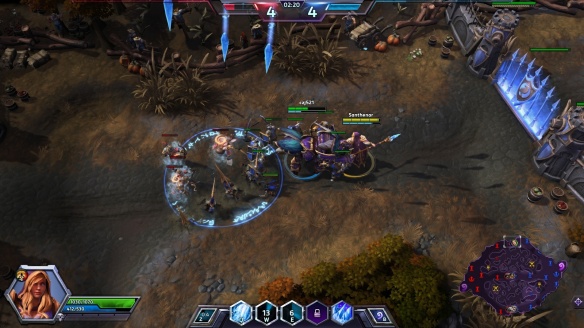 *(To be fair, all game communities are absolutely atrocious. Except TSW’s, which is only partially atrocious.)

However, December was an eventful month for me where Heroes is concerned.

This month saw the long-overdue release of Jaina Proudmoore. After seeing how long it took Anub’arak and Azmodan to make it into the free rotation, I decided to take a chance and buy Jaina as soon as she dropped to 10,000 gold.

I’m glad I did. Jaina almost instantly supplanted Tassadar as my favourite hero. I love her burst, her area of effect damage, her utility, her spell effects, her voice-overs… She’s just a complete blast to play.

I think a lot of it also boils down to being a big fan of Jaina as a character. Or at least the character she used to be.

And that’s the wonderful thing about Heroes. Every character is frozen at their moment of greatest awesomeness. In Heroes, Jaina isn’t some emotionally erratic nincompoop. She’s the calm-headed badass she used to be. If World of Warcraft has failed Jaina, then at least I can still bask in her awesomeness in this game. 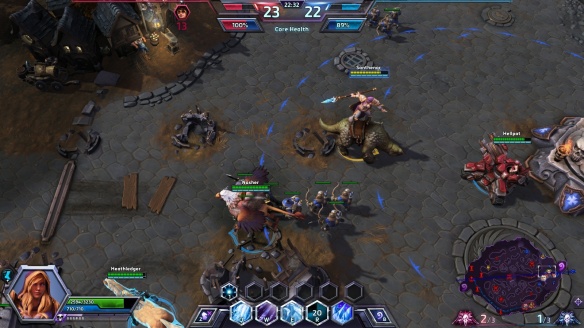 The greatest glitch ever: Jaina Proudmoore surfing on a dinosaur.

I was worried going in, because people on the forums were wailing about Jaina being extremely weak, but I haven’t found that to be the case at all. I’ve had great success with her, consistently. Maybe she’s only effective at relatively low MMR; I don’t know.

Part of the problem might be that Jaina is a very different kind of assassin. People seem to be expecting her to be like Valla or Nova — capable of blowing up single targets effortlessly — but Jaina isn’t very good at that. She’s not a duelist.

Where Jaina excels is in team fights. Her massive area of effect damage and slows are devastating in large brawls, and those are where games are decided. She’s a force to be reckoned with on maps with lots of big team fights in tight spaces, like Cursed Hollow and Blackheart’s Bay.

I loved Jaina so much that I resolved to make her my first hero to reach level ten. I treated myself to one of the new stimpacks (XP boosters) for Christmas, and together with the 25% holiday XP boost, I proceeded to rake in the experience hand over fist.

Even so, it was an abominable grind. I can’t complain too much, since all the rewards for hero leveling past level five are purely cosmetic, but my God, such a grind. 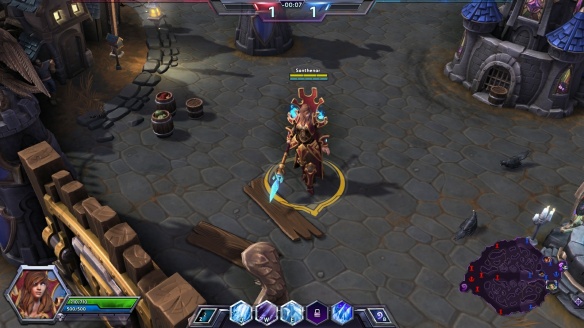 But it was worth it in the end. At long last, I unlocked her master skin, and it is magnificent, especially the red tint.

Don’t think I’ll be unlocking any other master skins any time soon, though.

Because one isn’t enough, here’s another shot of my Dragon doing the Single Ladies dance: 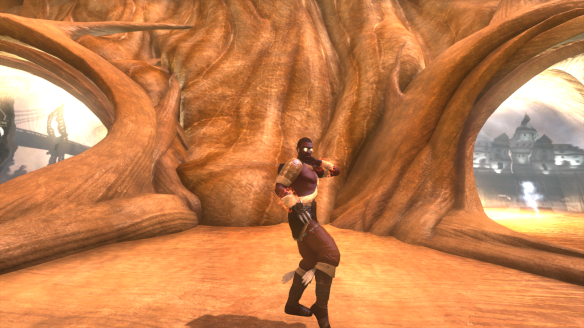