I’ve been playing around with the technical alpha of Heroes of the Storm for a couple weeks now, so I thought it was time to put together my thoughts so far. 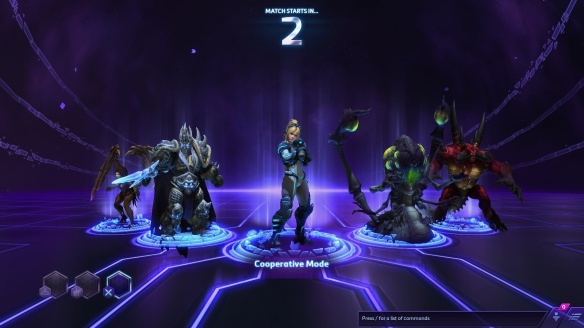 For the most part, I’m enjoying it a lot, and it has met or exceeded nearly all of my expectations. It is exactly what Blizzard wanted it to be: a simple, casual brawler with a fast pace and no shortage of action.

I don’t want to spend too much time going on about how the map objectives make matches much more dynamic than in other MOBAs, or how the removal of in-match gold and items puts the focus purely on the action. Much has already been written about those things in other previews, and all you really need to know is that those things are as cool as you think they will be.

I’d say my favourite maps so far are Haunted Mines and Blackheart’s Bay. I like how Mines almost turns into a totally different game every time the mines open, and it’s a really beautiful map. For whatever reason, Bay seems to always make for the most action-packed games, and Blackheart himself is pretty funny.

My least favourites right now are Garden of Terror and Dragonshire. Those seem to be the most similar to traditional MOBA matches. Although I will say that the announcer for Garden of Terror is hilarious.

On the heroes front, I find the ones I thought I’d like and the ones I actually like are quite different. Going in, I was most excited to play Nova and Tyrande, but in practice, my favourite heroes so far are Illidan, Valla, and Tassadar. Valla, in particular, is very fun, and I’m glad I preordered Reaper of Souls, since it included a free unlock of Valla in the full version of Heroes.

Tyrande wasn’t bad to play, but I found her a little finicky, and she didn’t feel very powerful to me. I’ve only been able to give Nova a try during the last week, and I’m still making up my mind about her. She’s fun, but maybe not quite as fun as Valla or Illidan. Although she’s not really that hard of a hero to play, Nova can be high stress because any mistakes you make with her can prove costly.

That said, the sheer cool factor of playing as Nova can’t be denied, which brings me to another major highlight of Heroes: the thrill of being able to play as so many iconic Blizzard characters. I wouldn’t be enjoying this game nearly as much as I am if not for the sheer joy of, “I’m frickin’ Arthas, yo!”

I’m trying to put together a stable of heroes I like to represent all franchises and all roles. Valla and Illidan cover DPS, and Tassadar is my main support, but I’m still searching for a good warrior and specialist. Arthas is a decently fun warrior, so he might be my pick there. I’ve yet to find a specialist that really clicked. Nazeebo is kind of fun, but I’m not terribly passionate about him.

I am starting to see where some of the addictiveness of MOBAs comes from. There’s always a new hero to try.

The thing that most surprised me about Heroes is how much detail and personality the game has. Little touches like the flocks of seagulls that scatter before you on Blackheart’s Bay or the banter between heroes.

I really love how much dialogue there is — didn’t expect that at all. I especially like how some pairings of heroes have unique dialogue based on their backstory. There have been some real nerdgasm moments. The other day, I was playing Arthas and killed Uther the Lightbringer, and I heard Arthas say, “Where is your precious Light now, Uther?”

I’ve also quite enjoyed some of the smack talk between the Brothers Stormrage and the not-so-friendly rivalry between Nova and Kerrigan.

All that said, the game is not without its shortcomings.

Whenever people talk of MOBAs, the issue of player toxicity is front and center. MOBAs have earned a reputation as wretched hives of scum and villainy, the lowest rung of gaming society. My experience has been that they’re not really any worse than many other online games — DotA 2 was no nastier than your average WoW battleground — but that’s still really bad, and it’s a serious concern.

I haven’t run into too much bad behaviour in Heroes so far, but it’s still alpha, and there are very few people playing. Things will undoubtedly get much worse once the floodgates open. Blizzard has taken some efforts to mitigate the potential for toxic behaviour by eliminating mechanics that put players into competition with their own team mates, as well as the ability to chat with the enemy team, but I doubt that will be enough.

Even in these early days, I have run into my share of frothing at the mouth nerd-ragers.

I can’t understand why people take it all so seriously, especially in a game this basic and especially in bloody alpha. We’re supposed to be testing the game, not proving ourselves to be the most gosu gamers around.

The free to play implementation leaves something to be desired, too. It’s not bad enough to ruin the game by any stretch of the imagination — it’s light years ahead of, say, Star Wars: The Old Republic — but it’s definitely a system that puts profit ahead of players.

Heroes uses roughly the same model as League of Legends. You’re expected to pay to unlock heroes permanently, but a random selection of heroes are available to play for free, changing every week, and you can earn an in-game currency (gold, in this case) to unlock heroes without paying real world cash. Gold comes from playing matches, doing daily quests, and from leveling up your account and heroes.

You can also unlock cosmetics like unique hero skins and fancy mounts, and these are only available for cash.

I’m not a huge fan of having to unlock heroes in the first place. I’d prefer DotA 2’s system, where all heroes are free, and you only pay for cosmetics.

That said, having to unlock them with cash or grind is not the end of the world, but the system could be handled better.

What bothers me the most is the huge and seemingly arbitrary disparity in prices between different heroes. It’s very demoralizing when a hero you want is, for no apparent reason, vastly more expensive than other, similar heroes. For example, Chen Stormstout is nearly eight times more expensive than Muradin Bronzebeard.

In what world does that make sense?

For this reason, Nova will likely not join my roster of unlocked heroes in the immediate future. I don’t feel comfortable dropping cash in an alpha, and I don’t see myself having 10,000 gold to burn any time soon.

That said, I’ve been playing for less than a month, and I’ve already managed to unlock four heroes without spending money, so I guess the situation’s not really that bad.

Despite a few complaints, and the buggy and unreliable nature of alpha, I do find myself enjoying Heroes of the Storm immensely, despite my general distaste for competitive gaming.

If you’re not in the alpha and have any questions, leave a comment, and I’ll do my best to answer them. And if you are in the alpha, share your thoughts.

1 thought on “Heroes of the Storm Alpha Thoughts”