If you follow this blog regularly, you’ll know my feelings on Ian Irvine’s Tainted Realm trilogy have been a little mixed. Irvine is my literary idol, and his Three Worlds novels are something that every fan of speculative fiction owes it to themselves to read, but the Tainted Realm has been a bit more inconsistent. 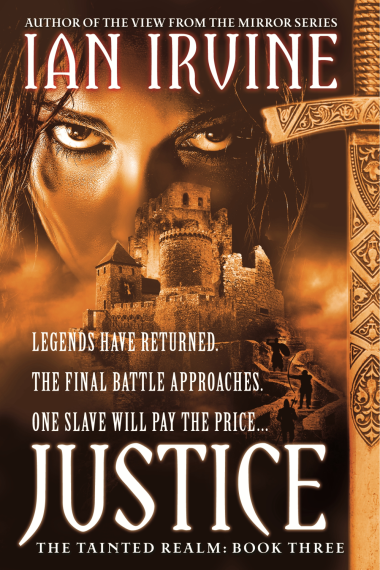 The first book, Vengeance, showed great potential, but it was too unrelentingly dark, and it started to feel more like an endurance test than a relaxing read. Book two, Rebellion, was much more balanced, and had only a few minor hiccups.

Unfortunately, I think the third and final installment of the series, Justice, leans more towards the first book in quality than the second, though for different reasons.

Justice features the land of Hightspall torn by a three-way war. The vengeful Cythonians under King Lyf control much of the land, but they are rapidly losing ground to the Herovian army led by the resurrected Axil Grandys and his Five Heroes. Caught between the unstoppable force and the immovable object is the meager remainder of Hightspall’s military, led by the fallen noble Rixium “Deadhand” Ricinus.

Meanwhile, Mad Wil has thrown the Engine at the heart of the world fatally out of balance, and the land is on the brink of an apocalyptic natural disaster.

As is always the case in Ian Irvine novels, the plot hits the ground running, and there’s no shortage of action or peril, but despite this, I found the first half of the book quite uncompelling for one simple reason: It felt like a total retread of the opening of book two.

Tali has been captured by the bad guys, who seek to use her for her own ends. Tobry is falsely believed to be dead. Rix spares a rival and rapidly comes to regret his act of mercy. Rix and Glynnie constantly butt heads despite their feelings for each other.

Now, which book am I describing?

I found Rix and Glynnie’s troubles particularly bothersome. Partly because I didn’t find their spats particularly interesting the first time around, let alone the second, and partly because I really thought the friction in their relationship had been resolved by the end of the last book. It made all of their development in Rebellion feel rather pointless.

Once you get to around the halfway mark of the book, Justice starts to forge its own path and becomes a very gripping book, but it’s hard to get past that shaky start.

Justice shows off Irvine’s talents by presenting examples of two completely different kinds of villain, each executed to perfection.

Lyf is a sympathetic villain, to the point where it almost feels unfair to call him a villain. I had to keep forcibly reminding myself of all the horrible things he’s done, because it’s so hard not to feel for him. He has suffered so much for so long, and he loves his people with all his heart. Despite all his crimes, he wound up becoming one of my favourite characters.

On the other hand, Axil Grandys is irredeemably evil. Vile, brutish, savage, cruel, selfish, arrogant, vain… all words that describe him perfectly. He is rotten to the core, with no justification for his endless acts of barbarism. I grew to hate him with every fiber of my being, and any moment that saw Grandys being frustrated, hurt, or defeated had me grinning like an idiot.

The latter half of Justice is almost entirely thrilling, but the ending left something to be desired. It occupies a strange and uncomfortable middle ground. It’s not a cliff-hanger, but it doesn’t leave everything resolved. The characters don’t live happily ever after, but they don’t face a fatalistic defeat, either.

It feels… unfinished. Perhaps Irvine wants to leave the door open to more stories set in this world, but I think he could have done that while still providing a more satisfying ending. As it stands, it just feels oddly incomplete.

I have a theory for why this is. More on that in a moment.

The one other strange and noteworthy thing about Justice is that it reveals the Tainted Realm is not, in fact, an entirely separate story but is tangentially related to the Three Worlds series. I won’t spoil exactly what the connection is, but it’s something that becomes apparent fairly quickly if you know your Three Worlds lore.

I’m not sure how I feel about this. One the one hand, it’s interesting to learn a bit more about the history of the Three Worlds, and as a little Easter egg for fans of Irvine’s other work, it’s a nice touch.

However, coupled with that oddly incomplete ending, I start to wonder. I can’t escape the feeling that the Tainted Realm wasn’t intended to simply be another Three Worlds series in disguise, and that we might see the Tainted Realm and its characters spill over into the upcoming conclusion of the Three Worlds, The Gate of Good and Evil trilogy.

I’m not sure this would be a good idea.

To be fair, part of me enjoys the idea of all the Tainted Realm and Three Worlds characters being brought together in a “comic book crossover/all your favourites in one place” kind of way.

But we were already getting something like that with The Gate of Good and Evil, as it looked poised to bring all the myriad plots and characters of the Three Worlds together. Wrapping up all the loose ends of eleven Three Worlds books would already have been a monumental task, and adding the loose ends of the Tainted Realm on top of that would likely lead to nothing but a scattered and over-burdened plot.

Of course, this is all just my own tinfoil hat theory. Nothing may come of it.

Ultimately, I think the biggest problem with the Tainted Realm trilogy was one of expectation as much as one of its actual quality. I’m such a huge fan of Ian Irvine that I expect perfection from him every time — and to his credit, I’m usually not disappointed despite those unrealistic expectations.

The Tainted Realm isn’t bad. Not even close. Despite some significant stumbles here and there, they’re still very much above average in the fantasy field with some truly brilliant ideas and powerful moments.

But they’re not on the same level of quality as, say, The View From the Mirror or The Song of the Tears, and so I can’t help but feel a little disappointed.

In the end, I’ll stand by what I said in my review of Vengeance. The Tainted Realm books are very good, but I’m not going to go around telling everyone to read them the way I do for the Three Worlds novels. They’re a good read, not a must read.