Prepare yourselves: It’s epic nerd rant time, and what I’m about to say will be very controversial in some circles.

For a long time now, there’s been a recurring complaint among the Warcraft fanbase – or part of it, anyway. “Horde bias!” they cry, talking about how Blizzard is in love with the Horde and secretly conspiring to make life miserable for the Alliance.

I’m tired of it. If you look at the facts, there’s little or no evidence that Blizzard has shown any special favouritism to the Horde. All these complaints of Horde bias serve no purpose but to make Alliance fans look bad, and they show a deep and fundamental misunderstanding of the art of storytelling.

Here’s something a lot of people ignore when talking about Horde favouritism: The few times where there has actually been a measurable imbalance in the gameplay, it’s almost always favoured the Alliance.

In the early days of World of Warcraft, it was simply better to be Alliance. They had far more content, and arguably far better content. No one in their right mind would ever claim it was more fun to level through the Barrens than through Duskwood.

“Guys, anyone know where Mankrik’s wife is?”

Or you could look up the attunement chain for Onyxia’s Lair. The Alliance’s version was vastly superior in both story and gameplay to the hideous grind the Horde got stuck with.

A lot of people also argue that the Alliance’s base in Alterac Valley was – and still is – much easier to defend than its Horde equivalent.

Then there’s the fact that the majority of tie-in media for Warcraft has centered on the Alliance. Books tend to have a lot more depth than the in-game story, so that’s a big mark in the Alliance’s favour.

The upcoming Warcraft movie’s original script was also stated to be heavily focused on the Alliance. It was Duncan Jones that convinced Blizzard to give the Horde a bigger role.

I’ll freely grant that many of the expansions to WoW have favoured one faction over another, but it’s not as one-sided as some like to claim.

Burning Crusade was definitely a Horde expansion. Outland is the home of the Orcs and the Promised Land of the Blood Elves, so it only makes sense that it would focus on the Horde.

Wrath of the Lich King, on the other hand, was the Alliance’s story through and through. Every major story arc in that expansion put the Alliance front and center.

The war against the Lich King was led by Tirion Fordring and Darion Mograine, both former knights of Lordaeron. I’ve heard it argued that since they were neutral, they no longer count as Alliance, but they were certainly far closer to the Alliance than they ever were to the Horde. They fought to avenge Lordaeron, and in the case of the Argent Crusade, they were essentially a continuation of the Knights of the Silver Hand – an Alliance military organization that had fought the Horde in the past.

There’s also the fact that the Lich King’s Horde connections were completely ignored. I’m hard-pressed to remember any mention that the original Lich King was an Orc. Everything was about Arthas, even though he formed only fifty percent of the Lich King.

Then there was the storyline around Ulduar. The main character of this arc was Brann Bronzebeard, an Alliance hero. We got major insights into the origins of the Dwarves and the Gnomes, while learning nothing about the history of any Horde races despite there being plenty of opportunity to do so.

The Vrykul also provided insight into the backstory of humanity in the Warcraft universe, so that’s again an Alliance-centric story.

Finally, there’s the Nexus War storyline, which focused on Dalaran – an Alliance city. Yes, they may have chosen to accept the Horde’s assistance in battling a greater threat, but they’re still an Alliance city. All of the NPCs belong to Alliance’s races, its leaders are Alliance war heroes, the Horde’s representation is confined to one small corner of the city, and recent events clearly illustrate where Dalaran’s loyalties lie when forced to pick a side. 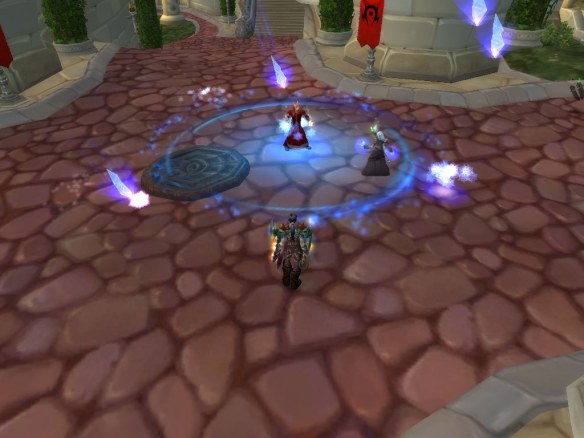 It is true that there were some good Horde storylines in Wrath: The Forsaken’s perfection of the New Plague and subsequent civil war, the introduction of the Taunka, Garrosh’s rise.

But it’s also true that all these storylines were essentially over by the time the player hit level 74, while the Alliance’s storylines continued through to the end.

My point here is not that Blizzard really favours the Alliance, but that they’ve been given their fair shake.

That brings us to Cataclysm, universally hailed as the epitome of Horde bias.

Yes, Thrall was the main character, but he’d left the Horde at the time. I’d be willing to accept that he still counted as a Horde character, but if you wish to put forward that argument, you can’t deny that Dalaran, Tirion, et al. were Alliance. There’s also the bizarre and utterly baseless belief that Thrall was rammed down our throats much more than any character had been in the past, but that’s a rant for another time.

The other complaints about Cataclysm are that the Alliance was always losing, and the Horde was always winning.

The Alliance defeated the Horde numerous times throughout Cataclysm. They won in Ashenvale, and the only reason the Horde wasn’t driven from the forest completely was because they made a pact with a Demon. The Night Elves curbstomped the Trolls in Darkshore. Stormwind conquered Stonard in the Swamp of Sorrows — the oldest surviving Orcish settlement on Azeroth.

The forces from Theramore succeeded in conquering a good chunk of the Southern Barrens and razing Camp Taurajo — a strike at the very heart of Horde territory. The only reason the Siege of Orgrimmar didn’t happen then and there is that the Cataclysm split the Barrens and cut off the Alliance’s line of advance.

The Alliance may not have won in Gilneas, but they didn’t exactly lose, either. Despite being initially outnumbered and outgunned, they forced the Forsaken into a costly and humiliating quagmire war that is still raging.

Yes, the Horde won a lot. Maybe more than the Alliance. But this wasn’t a lore decision. It was to correct the original imbalance that existed in leveling content. All the Horde’s gains did was bring them even with the Alliance.

Meanwhile, the Alliance was constantly being presented as noble heroes who could no wrong, while the Horde suddenly devolved into their pre-Warcraft III Saturday morning cartoon villain status. There’s a reason why I switched to focusing on the Alliance in Cataclysm. 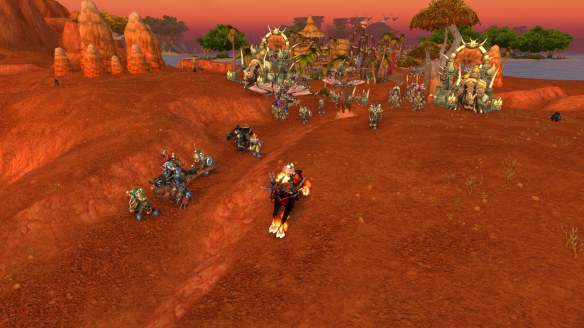 Now we come to the present day, where Horde bias cries are as loud as ever. I’ll grant that the Alliance got the shaft in Battlefield: Barrens, but otherwise, this was a very well-balanced expansion for both factions. Neither was shown as being perfectly good or perfectly bad, and each side got some great story moments.

I could go through all the examples, but I think it’s more worth talking about Siege of Orgrimmar and how it sums up the absurdity of this whole debate. Because as soon as it was announced, people were complaining that SoO was the latest example of Horde favouritism.

Yes, the Alliance invading the Horde capitol, smashing its military, and killing its leader is yet another example that Blizzard hates the Alliance.

I just can’t take this “Horde bias” talk seriously when people make arguments like this. There are even now plenty of people complaining that the Alliance never got its promised “fist pump moment.”

What part of ransacking the enemy capitol doesn’t qualify as a “fist pump moment”?

Honestly, what more could Blizzard have possibly done? Destroyed Orgrimmar and left the Horde without its main hub city? Spend weeks redoing all the quests and game mechanics associated with it? Removed the Horde from Ashenvale or another leveling zone, once again ensuring the world favours the Alliance?

All things like that would do is punish the players. And I don’t remember having a say in whether Garrosh would become warchief, so that’s nothing but petty.

I’m really starting to think that most of the people complaining about Horde bias would not be satisfied by anything short of the complete removal of the Horde from the game.

Not that there weren’t missed opportunities for Alliance story. I’m pissed we never got that “Trials of the High King” questline. It sounded awesome. But the same is true for the Horde. There was massive build-up of both Saurfang and Sylvanas’s enmity for Garrosh, but they were all but ignored in the final climax of the story. Garrosh murdered Baine’s father, but Baine never got to play a major role in the warchief’s downfall.

The same is true of the game’s past history. The Alliance has some very legitimate cause for complaint that some of its races and leaders have been ignored — Tyrande comes to mind — but so do the Horde. Hell, Gallywix is the only racial leader who isn’t actually in the game. Lor’themar was the poster child for ignored characters up until recently. It took until MoP for Blizzard to even figure out how many eyes he has and get him a voice actor that can pronounce “Quel’thalas” correctly.

Of course, there is one more part to this story. For once, I am inclined to agree that the Alliance has a right to complain about being ignored when it comes to Warlords of Draenor. I really can’t see them getting a lot of interesting story out of WoD, and if they do, it’ll just be more Draenei stuff.

But then again, it’s not looking too good for the Horde, either. There seems little or no opportunity for development of any Horde races other than the Orcs, who have already had plenty of time in the sun. I’m a big fan of Orcs, and even I’m not thrilled with an entire expansion of the Orcy McOrc Show, with Special Guest Star Orcs.

There’s also the fact that all of the Horde’s iconic heroes are being brought back from the dead to be loot pinatas. It’s hard to imagine an outcome for WoD that doesn’t crap all over the Horde’s history and past heroes. And it’s yet another thing to add fuel to the arguments that Orcs really are evil after all, as all of the iconic chieftains are being presented as villains even without Demonic corruption.

And this brings me to my final point.

There is no Horde story and Alliance story. There’s just the story. Sometimes, it will favour one faction. Sometimes, the other. Perfect balance will never be achieved, nor should it be.

Can you imagine how boring the lore would be if each faction experienced joy and suffering in exactly the same proportion? There’s nothing Blizzard could do that would suck the fun out of the story worse than that. 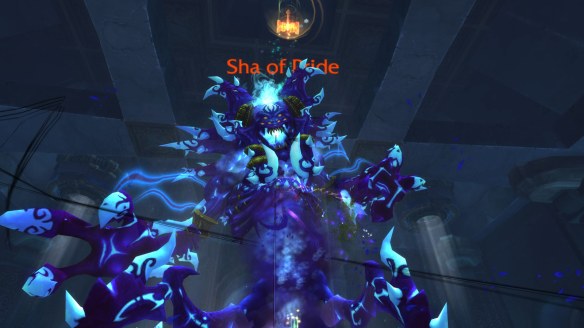 Stories aren’t fair. Sometimes, your favourite characters have bad things happen to them. Sometimes, the characters you hate triumph. That’s the nature of story-telling. The essence of drama is conflict, and you can’t have conflict without a little injustice.

Everyone would enjoy themselves a lot more if they just stopped getting so invested in the fates of fictional factions. Stop counting up each victory and defeat, looking for any perceived slight to your chosen team. Just enjoy the story for what it is.