Lately, I find my feelings about World of Warcraft are changing, and it’s giving me a different perspective on MMOs. Two things have led to this. 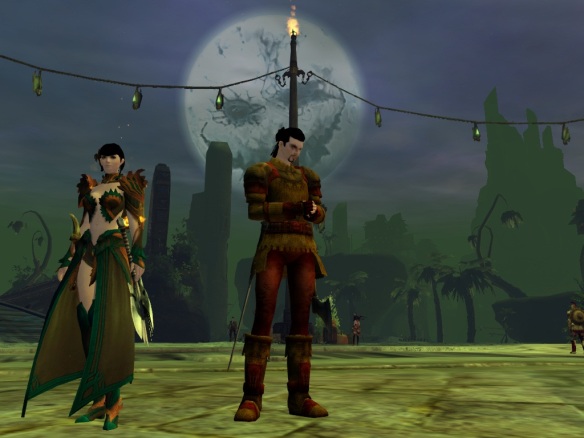 The first is taking a break and playing other games, particularly Guild Wars 2 and The Secret World. These games both have the gear grind treadmill that WoW does, but in both cases, it’s a much smaller part of the game, and they’re generally much more friendly to a casual play style.

The second is changes to WoW’s design in Mists of Pandaria, also catering to a more relaxed view of the game.

Over all the years I’ve played WoW, I’ve basically played it the same way. I’ve ground gear at endgame in the hopes of seeing some raid content. Yes, I avoided raiding guilds and the culture of “serious” raiders, but I still wanted the content and the story.

So I’d just keep trying to get more gear in the hopes it would increase my chances of getting into a successful PUG. It created this sort of low grade but constant anxiety about the game. Gotta keep up with the Johnsons.

In contrast, when I played other games, I didn’t have this, and in some ways, that made me enjoy them a lot more.

Then came the implementation of the Raid Finder in Cataclysm. This largely removed the need for me to participate in the gear grind. I still need to gear up to be able to queue for the Raid Finder, but that’s pretty easy, and once I do, I can pretty much do whatever I want — including not play at all.

It’s taken until now for me to fully realize this. It took trying other games to get me to grasp that I no longer need to stress about staying competitive.

The joy of indifference:

There’s also the fact that Mists of Pandaria is, by any standard, a very easy expansion, especially when compared to Cataclysm.

I don’t share the community’s intense hatred of Cataclysm, but there is one thing about it I really disliked, and I didn’t even realize it until I was free of it. 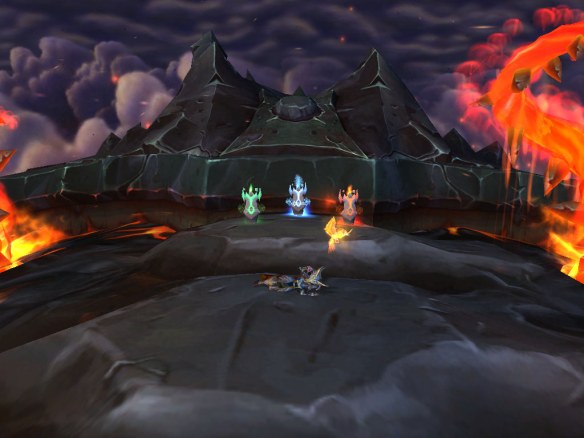 Cataclysm’s difficulty had a terrible effect on the community. The increased difficulty made it a case of survival of the fittest, and there was no room for the weak. It made elitists of even casuals like me.

I remember obsessively checking my Recount to make sure I was doing enough damage. I remember inspecting every tank at the beginning of each dungeon to make sure they weren’t scrubs. I remember kicking many, many nice people from my groups just because they couldn’t cut it as gamers.

I don’t have to play that way anymore. I haven’t even updated Recount since 5.1 launched — though I’m sure I will get around to it sooner or later.

The point is this: I no longer care, and that’s a good thing. The only goal I’m still pursuing with any seriousness is the Wrathion legendary chain, which has me regularly valor-capping for the first time ever. Otherwise, I can play however I want, without worrying about staying competitive.

These changes to WoW mean I’m essentially “done” with the game much sooner than I would have been before — heck, before I was never done; it was an endless treadmill. Some people might think this a bad thing, but I don’t believe it is. It frees me to expand my gaming horizons.

I’m still playing WoW, but I’m also playing TSW and whatever else catches my fancy. I even played some Diablo III the other day for some strange reason. But I’m not enjoying WoW any less. In some ways, I might be enjoying it more.

Blizzard seems to be of the belief that more time playing their game equals more enjoyment for the player, but I believe this is a flawed theory. I think quality of gaming time matters more than quantity.

By not feeling like I need to log onto WoW every single day, I appreciate my time with it more. I never just log on and sit around thinking, “What am I gonna do?” I play because I really want to, not out of habit.

If I’m being fully honest, the fact I’m no longer as enamored with WoW’s mechanics as I once was is also a factor. This is the result of playing other games, which I found much more enjoyable from a strict gameplay perspective. As I’ve said, WoW does feel a little archaic these days.

I could never give it up. I care too much about the world and the characters, and Mists of Pandaria is doing a very good job of rekindling that feeling. But it does leave me wanting more from a gameplay perspective.

As an aside, this is a great lesson on the importance of creating good lore and an engaging world. I like the game mechanics of Guild Wars 2 much more than those of WoW, but I’m playing WoW more.

I’m also working on lowering my expectations for what WoW is capable of, which I realize were unreasonably high. My love for Warcraft III and the years where I wanted to play WoW but couldn’t led me to put the game on a pedestal. I think I’ll enjoy it more if I accept it for what it is, rather than expecting it to be the gaming messiah.

How I became a game-hopper: 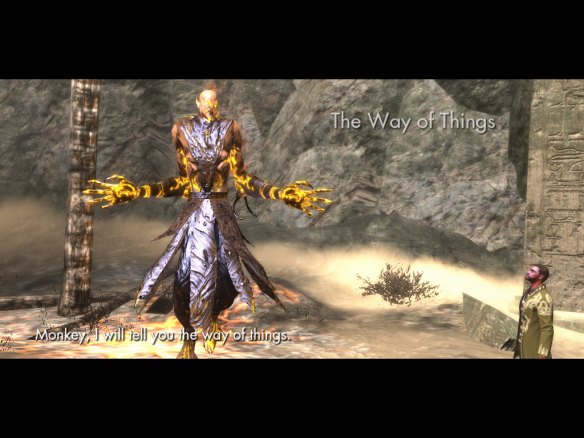 There seems to be a general perception among the MMO community that obsessing over one game is the right way to do things. “Game-hopper” is a term often spoken with a hint of derision, and the general feeling is that playing an MMO is like being in a committed relationship. I’ve even dubbed my series of coverage on other games “Cheating on WoW.”

(Expect at least one more installment of this series in the near future, by the way.)

But I’m starting to think this is a very flawed way of thinking. It makes sense for single player games, where focus on one and burn through it quickly before moving on to another.

But MMOs are a different beast. You never really finish them, and if you try to play one forever, you will eventually burn out. The truth is that there is no developer on Earth who can produce content faster than players can get sick of it.

Nor can one MMO satisfy all gaming desires, though some do an admirable job of trying. If you try to play one MMO exclusively, you’ll eventually get bored and want to try something else.

I’ve come to the conclusion MMOs shouldn’t be thought of as an exclusive relationship. I’m thinking of them more as television shows.

I like Glee (less so since Quinn left, but I digress), but that doesn’t mean I want it to be the only show I ever watch. I also like to watch The Simpsons, The Daily Show, and the news. Similarly, I like WoW, but I also like TSW, and GW2, and so forth.

This is part of why I’ve come to disdain the subscription business model so much. It’s not practical for most people to maintain several subs at once. Part of me wonders if I can even justify paying for WoW when I’m not playing as compulsively as I used to.

I’m not saying my way is the only way. If you enjoy sticking with a single game to the exclusion of all others, that’s cool. But I will go out on a limb and say that “game-hopping” is probably the wave of the future for most players.

I suspect this is a large contributor to the growing popularity of subscription-free games. Again, the “free to not play” argument.

What about you? Do you practice MMOnogamy, or do you prefer to sample from the buffet of gaming? Share your thoughts.

6 thoughts on “WoW and My Changing Attitude Toward MMOs”