Having not played the original Morrowind or even ESO’s Dark Elf zones from the base game, the first expansion for Elder Scrolls Online largely passed me by, but given the standalone nature of ESO expansions (or “chapters,” as they somewhat obnoxiously insist on calling them), there was nothing stopping me from jumping straight to the next. 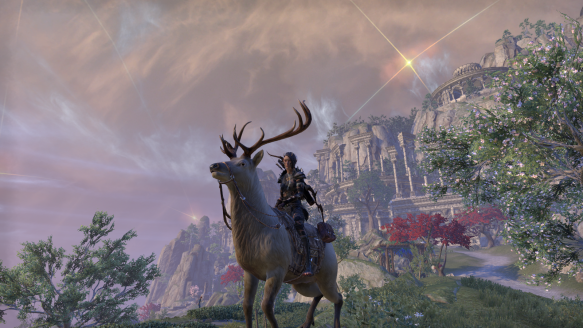 When Summerset was announced as the setting of the next one, I was excited. As an Aldmeri loyalist, I’ve wanted to visit Ayrenn’s homeland pretty much since I started playing. The inclusion of Razum-dar, objectively the best character in the game, only sweetened the deal.

So I pre-ordered. I even sprang for the deluxe edition, which is a decision I find retrospectively baffling.

In case it isn’t clear by now, I’m feeling more than a bit of buyer’s remorse.

Summerset is ridiculously, stupidly, unbelievably pretty. I’ve never been the biggest fan of ESO’s visuals — finding both the art style and the graphical fidelity underwhelming — but hot damn this expansion looks good. The white sand beaches, the pale blue of the ocean, the brilliant colours of the flowers and the greenery, the stately architecture… it’s all just breathtaking.

And that’s without getting to the island of Artaeum, which is a delightfully whimsical departure from ESO’s usual low fantasy style.

It’s not just the environments, either. The new armour models are also incredible, and even the new monsters look beautiful in a horrible kind of way. There is no part of Summerset that isn’t a total feast for the eyes.

But once you move past the superficialities, Summerset has thus far proven a pretty underwhelming experience.

Going in, I was excited about the possibilities for interesting stories in this area of the world. Might we finally explore the Maormer in detail? Perhaps the Sload would take centre stage as a threat unlike anything seen in ESO before? Or maybe we could get some spy games with Raz and Ayrenn?

Then it turned out to be “Daedric cultists are trying to blow up for the world for reasons.”

Now, I’m only about halfway through Summerset right now, so maybe there’s some epic twist I haven’t gotten to yet, but right now it feels like I’m just retreading a story I’ve already seen several times before, and didn’t much enjoy the first time around.

It’s not just the story, either. I thought by now ESO would be innovating or improving its mechanics in some way, but aside from the improved visuals, there’s absolutely nothing to distinguish Summerset from any of the zones that launched with the game. The quests are based on the exact same mechanics. The delves play the same. Even the much-vaunted new Abyssal Geysers are just a reskin of the old Dolmens. Don’t get me wrong; I liked Dolmens, and I like Geysers, but again, it’s nothing new.

In fact, if anything, quest design seems to have gone downhill since launch. I don’t remember ever having to do this much back-tracking or repetition in the base game.

I was also hoping by now they might have some more interesting rewards. From the perspective of an endgame player, it’s hard to get excited about quest rewards when a forty-five minute quest gets you only enough gold for one day’s mount training, a pittance of XP, and a single piece of gear that’s little more than vendor trash.

Finally — and I can’t believe I’m saying this — this expansion might be too Elfy. I’ve come to the conclusion the High Elves are by far the least interesting Elves in ESO, but they’re getting 100% of the spotlight in Summerset. That makes sense lore-wise, but it gets old when every single NPC is either a haughty noble or a scholar with their head in the clouds.

I will probably finish Summerset at some point, but right now I’m struggling hard to find the motivation to keep logging in. I look back on the wit and personality of Thieves Guild and wonder how this is even the same game.

It does also have me pondering my future with ESO as a whole. I’ve tended to view it as my new “main” MMO following TSW’s demise, but my actions have not even come close to backing up that intention.

I feel like I should love ESO. On paper, it’s pretty much everything I ever wanted from an MMO. Open build system, level-scaling, strong commitment to story, highly soloable, action combat… But somehow it still struggles to hold my interest.

I think it’s some combination of a story that’s usually interesting but rarely exciting, an incredible sameness of content design, and a very stingy approach to in-game rewards. 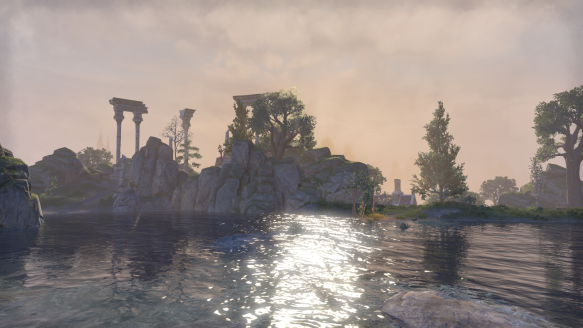 It’s such a good game, but yet it’s so hard to get excited about.