Despite its many well-documented flaws, I have long maintained a soft spot for the MMO shooter Defiance. I really enjoy the setting, and it has some very memorable NPCs. I can forgive a lot if a game has personality, which is one thing Defiance has never lacked.

That said, I still haven’t played in a long time, and I considered my time with the game effectively done. That held true until the announcement of Defiance 2050, a reboot designed to improve the game and make it run on more modern consoles.

Immediately, there is an obvious resemblance between 2050 and The Secret World’s reboot as Legends, something I’ve been harshly critical of. And it does seem to be a pretty similar situation: It’s being branded as a new game, but by all reports it’s pretty much the same game with a tweaked progression system.

However, there are a couple of factors that leave me feeling a bit more open-minded this time.

For one thing, I haven’t invested nearly as much time in Defiance as I did in TSW. I only played through the story once, and that was some years ago now. The prospect of having to start over from scratch isn’t nearly as galling.

While there’s definitely still room to criticize the treatment of Defiance veterans, I do think Trion is handling this a little better than Funcom did. They’re not shutting down the old Defiance, they are transferring character slots to the new game, and as far as I know they never lied about adding new content to Defiance only to pull the rug out from under loyal players.

Also, TSW’s progression system was a huge part of the game’s appeal to me. Throwing it all out made for a less interesting game. 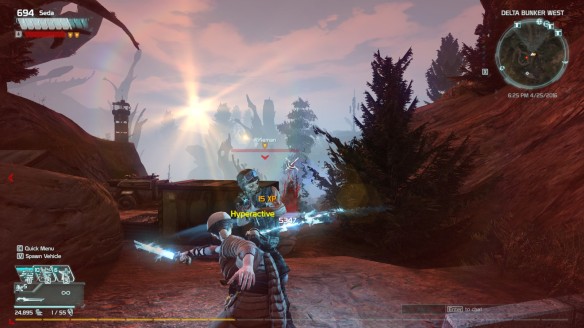 On the other hand, Defiance’s progression has always been one of the game’s greatest flaws. Leveling in Defiance is excessively grindy, convoluted, and unrewarding, managing to be both over-complicated and incredibly shallow all at once.

Normally replacing a classless leveling system with traditional classes would get the stink eye from me, but in this case, I think it might add some actual depth to the game. It sounds like Defiance 2050 will have a greater emphasis on active abilities — Mass Effect style — instead of just being a pure shooter. That would be most welcome.

My greatest hope is that 2050 will not entail such a massive grind. Defiance’s base story was easy enough to play through casually, but the post-launch content quickly became utterly punitive to anyone who hadn’t sunk a massive amount of time into grinding. That was ultimately what drove me from the game, and if that could be fixed, I would be very pleased.

Unfortunately I’ve found it very hard to find any concrete info on Defiance 2050. Trion is running developer livestreams, but ain’t nobody got time for dat, and the media doesn’t seem to be covering the game that much. So I see a lot of potential for 2050 to improve on the original game and maybe even usher in a bit of a renaissance for the IP, but there’s really no way to know if that potential will be realized.

Word of mouth coming out of the beta is pretty negative, but there’s really no way to know if that actually means anything or if it’s just the usual Internet rabble-rousing.

Seriously, the gaming community has officially become the boy who cried wolf at this point. If you say every game is a broken cash-grab, there’s no way of knowing which games are actually broken cash-grabs.

The logical part of me recognizes that I probably shouldn’t let myself get excited about Defiance 2050. There’s a lot of cause for concern here. But still, I find the temptation to grab a Founder’s Pack is surprisingly strong…