Seven down, five to go. 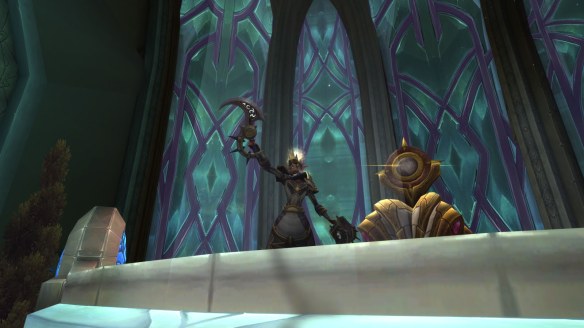 The latest class story under my belt in World of Warcraft is priest, meaning I have now finished the campaigns for all three cloth classes, as well as all four of my Blood Elf characters (I think we should all be impressed that only 1/3 of my characters are Blood Elves).

As I suspected, the priest story and the paladin story are pretty much the same thing, with exactly the same ending. There’s even a few cases where NPCs called my priest “highlord,” which is the paladin title.

I think this was a disservice to both classes. The paladins got robbed of a proper ending to their own story, and the priests miss out on some important aspects of the plot, like where Lothraxion comes from and how Delas became a paladin.

And if you play both, it’s just repetitive.

As with the paladin story, there’s also some things that are glossed over that really shouldn’t be. Oh, hey, here’s zombie Alonsus Faol and Arthas Menethil’s sister the rightful queen of Lordaeron, but let’s not for a moment acknowledge what a massive deal that is or explain in any way where they’ve been all this time.

The one thing I really did like about the story was the bit about Natalie Seline, as it is (I think) the first actual canonical lore we’ve gotten around the Cult of the Forgotten Shadow and shadow priests in general. It was all too brief, though. 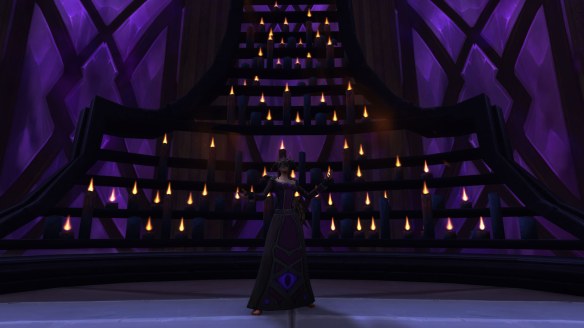 My main motivation for playing a priest, beyond my general desire to finish as many class stories as possible, was because shadow has access to one of the most exciting artifact weapons: Xal’atath, Blade of the Black Empire.

Xal’atath is somewhat unique in that it is arguably the only artifact that is both a completely new addition in Legion, and a big deal in the greater lore: an ancient sacrificial dagger dating back to the Black Empire itself, the nightmarish civilization of the Old Gods that dominated Azeroth before the coming of the Titans.

Beyond that, Xal’atath is not simply a weapon. She is a sentient being with a malevolent will all her own. She will even whisper to you as you play, providing tantalizing insights to all that is happening… if you’re willing to take her at her word.

This, however, did prove something of a disappointment simply because Xal’atath’s dialogue is far less frequent than I had expected. It reminds me waiting on party banter in Dragon Age: Inquisition. It’s almost always interesting when it comes up, but each bit of dialogue can be few and far between.

I do love her voice acting, though. The actress did a great job. Far from the gravel-voiced snarls of most Warcraft villains, Xal’atath’s voice is calm, soothing, even seemingly reasonable. 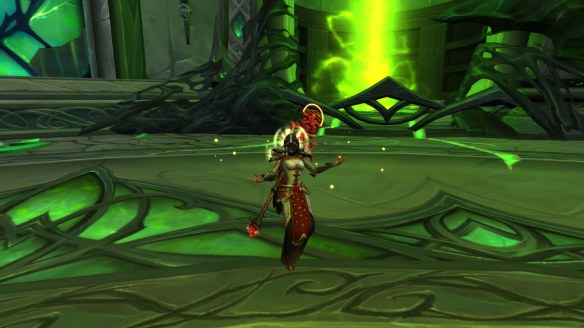 It’s so easy to forget just what she is and what she represents. It’s easy to understand how so many people have fallen under sway down through the countless millennia.

It does make me a bit sad for the limitations of an MMO. I’d love to see Xal’atath’s story continue. I’d love to see her ultimately betray the player, and perhaps become a dungeon or raid boss. It would be interesting to see just what her true form really is.

But all of that is extremely unlikely to ever happen, because she’s an item that the player controls and relies on. Even when artifacts are no longer relevant (still a terrible idea, by the way), lots of people will still be transmoging their weapons into her, I’m sure, and people who don’t play priests likely won’t know who she is. So in likelihood her story ends here.

Playing a priest was also somewhat interesting from a gameplay perspective. If you’ve read Superior Realities for a long time, you may remember priest was the very first class I ever played in World of Warcraft, though I quickly lost interest in it. I always found it tedious at low levels, but the concept of a class blending the powers of Light and Shadow has continued to appeal strongly in theory, and I often thought I might like it better at high levels.

Now, I had the opportunity to put the theory to the test, having skipped straight to level 100 with my free boost from Legion. I’m not sure if it’s because of being high level or the class changes that came with Legion, but I did definitely enjoy being a priest much more than I ever have before, though it’s still not going to go down as my favourite class. 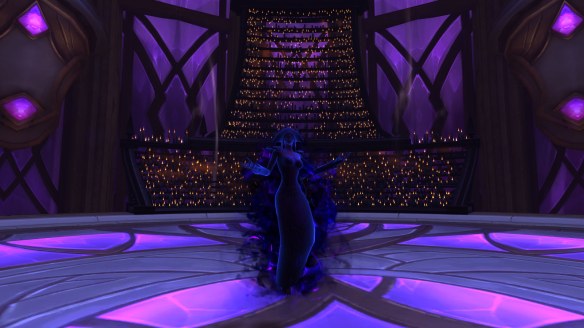 I still feel that WoW’s UI isn’t a good fit for the kind of damage-healer hybrid discipline is, but despite that, I found it growing on me. It’s certainly a refreshing change of pace, and closer to the kind of balanced support playstyle I feel MMO healers should be.

Shadow I maintain mixed feelings on. I like the general idea of building to voidform and then trying to maintain it as long as possible, but it’s tuned in such a hectic and unforgiving way that the playstyle feels very rushed. It’s exhausting after a while. I would like to see insanity built and spent at about half its current rate, making voidform a rarer but more satisfying experience.

Finally, this was a very visually appealing class. The big caster animation update happened about halfway through my playthrough of the class campaign, and I’ve been loving the new effects and animations for everything.

Beyond that, priests have always been one of the luckiest classes when it comes to things like tier sets, so I’ve been having a grand time coming up with all sorts of pretty outfits for her, as you can see from the screenshots (click them to view full size). 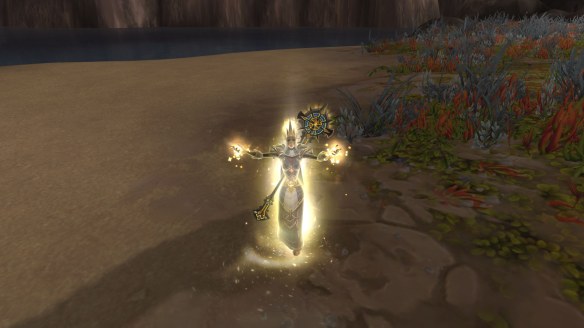 My backstory for the character is that she made a secret and desperate pact with the Void  when the Light abandoned her people, a pact she now deeply regrets, so I’m trying to make all of her outfits hide her face in some way. She must always conceal the shame in her expression, and the madness in her eyes.