Next up on my journey through Legion’s class stories is mage, and this was an interesting case. 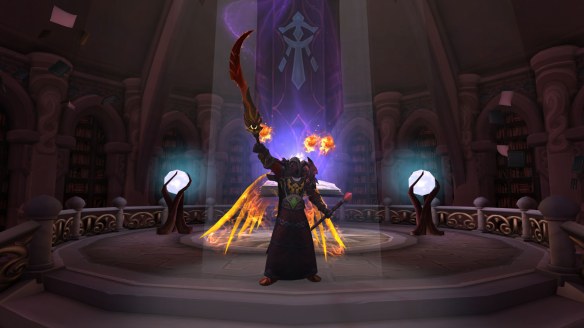 Long-time blog readers may remember that my mage was my original main. He wasn’t the first character I ever created in World of Warcraft, but he is the first one I committed to and made significant headway into the game with. He was my first character to ever reach max level, alongside a bevy of other firsts, and he received the lion’s share of my attention for the first year or two at least.

But I started falling out of love with the class in Cataclysm, and when Mists of Pandaria launched, I completely abandoned the character.

That was five years ago, and now suddenly I was playing him again. It was a bizarre feeling. I really don’t know what to compare it to.

Bizarre, but not unpleasant, though. I found it an excellent example of what makes MMOs special, and why I keep playing them despite all their many foibles. The persistence and longevity of them is staggering. There’s something strangely comforting to be able to return “home” to a character nearly ten years old after so long away.

That’s not to say I’m entirely back on the mage train. While there were times, as I fell back into the dance of locking down and kiting mobs, when I felt some of the old joy return, the fact is mage still just doesn’t click for me the way it used to. I’m not sure if it’s because of how the class has changed, or how I have, but the magic just isn’t quite there anymore (no pun intended). 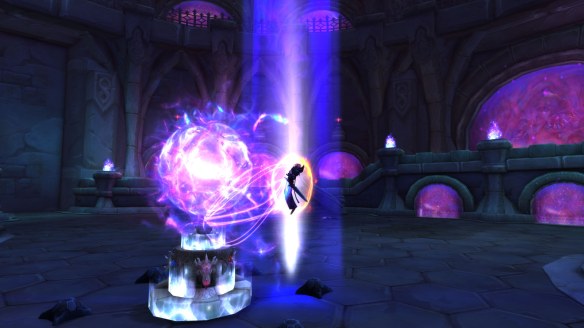 The most fun thing about it was actually my combat ally, Archmage Modera. She has a ranged version of frost nova, helping me keep enemies at a safe distance for even longer, and it even allows my spells to benefit from shatter and all those other juicy frost mage passives. And unlike my nova, it doesn’t even break on damage!

This created a great “tag team” playstyle, and I haven’t felt so much camaraderie for a video game NPC since that time Cora and I charged the same Kett at the same time from opposite directions.

It was not a good day to be that Kett.

But while I didn’t entirely fall back in love with playing a mage, their class story proved to be quite enjoyable, maybe the best yet.

One thing I’ve learned from doing these is that the class campaigns aren’t long enough to tell satisfying, self-contained stories. To work, they need to lean heavily on established lore and characters. The Warcraft universe is so vast now that there are oodles of great characters and potential plot threads that are just gathering dust. Class stories are a good way to fill in the blanks, so to speak.

The mage story works well because that’s exactly what it does.

Interestingly enough, the mage campaign is basically a sequel to the Warcraft comics, focusing on the hunt for the Dreadlord Kathra’natir. Med’an issues aside, I was a big fan of the comics, and I think they’re one of the highlights of modern Warcraft lore, so this pleases me well.

Meryl Felstorm, in particular, could be the poster child for ridiculously awesome yet totally obscure Warcraft characters, so I loved finally getting to meet him in-game. The voice actor they got for him is great, too — exactly how I imagined his voice.

It’s a relief because it doesn’t always work out that way. Valeera’s voice actress is not bad, but her voice just doesn’t suit the character at all, and Thisalee Crow’s new voice has scarred me for life.

As with most class stories, the plot was a little straightforward, and the final quest over a little too quickly, but on the whole the mage campaign tells a very satisfying story.

It did a very good job of utilizing the class’s abilities in interesting ways, too. Among other things, there’s a boss fight where you will be overwhelmed by adds unless you spellsteal them to power them down, and a segment where you evade a small army of demons using invisibility. 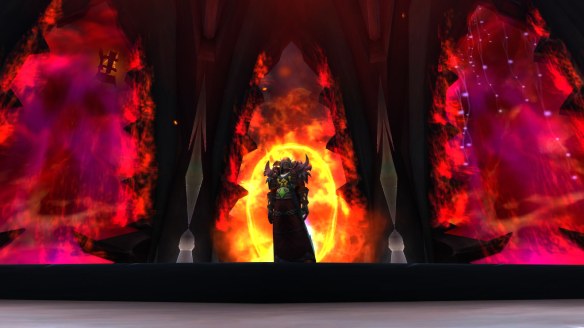 My one significant complaint is that if this is meant to be the final throwdown with Kathra’natir, Valeera really should have been there. I realize she’s already in the rogue campaign, but there’s no reason she couldn’t have appeared in both. Of all (living) people, Valeera probably has the best cause to want vengeance against Kathra’natir.