From the start, I’ve felt very torn about the addition of the necromancer to Diablo III.

On the one hand, I’m a big fan of necromancers in general and Diablo necromancers in particular. I think it’s a fresh take on the archetype to present them not as power-hungry madmen, but spiritual people devoted to maintaining the balance of nature.

But on the other hand, I remain deeply unhappy that Blizzard has abandoned D3’s story unfinished, and it’s hard to get excited about doing all the same stuff over again, even with a new class.

In the end, it is the WoW Token that broke the deadlock. Thanks to it, I was able to get the necromancer effectively free. At that point there was no good reason not to give it a shot.

On the whole, it’s a fun class. It took me a few days to find a build I really like, but that’s to be expected, and experimentation can be enjoyable in its own right.

Much to my own surprise, I wound up favouring a melee-heavy build, with Death Nova and Grim Scythe as my core attacks. I had initially planned to go for as many pets as possible, but it created too much screen clutter, so I ended up using “only” eight pets: the obligatory skeletons and a bone golem. Plus my follower and some demonic suicide bombers summoned by a ring I found.

If I were to describe the necromancer in a word, I’d go with “visceral.” Not only does it feel far more physical than any other spellcaster, it feels more physical than even the melee classes. It’s all reverberating explosions, bone-snapping crunches, and wet splashes of gore.

If you’re a fan of ultra-violence, this is the class for you. It is spectacularly gorey. The necromancer’s finest moments come as the entire screen is filled with erupting blood and the constant rain of body parts. It gave me a lot of warm, fuzzy flashbacks to the Myth franchise.

On the downside, the necromancer’s resource, essence, has a “feast/famine” feel that can rather derail the flow of play sometimes. Resources that don’t automatically regenerate just never feel right in Diablo III for some reason.

My biggest complaint with the class, though, is how lifeless (no pun intended) they feel as a person.

It’s been a while, I admit, but I seem to recall the D2 necromancer having a fair bit of personality. I recall him seeming curious and passionate.

The D3 necro is not like that. She speaks in a soulless monotone the vast majority of the time and generally avoids displaying anything resembling warmth, personality, or humanity.

I’m used to playing the cocky, reckless wizard and the wry yet warm crusader. Compared to them, the necromancer is like watching grass grow.

And really, it’s just not that exciting to be playing through all the same stuff yet again.

I love the campaign in Diablo III, and revisiting it reminded me why. Say what you will about Blizzard’s story-telling, but they got it right this time, and I vehemently reject any claims to the contrary. D3’s story is epic, powerful, exciting, and brimming with colourful and three-dimensional characters.

But I’ve already done it so many times. I love chocolate ice cream, but if I had chocolate ice cream for every meal for a year, I’d be begging for something, anything else by the end. I’d also probably end up with diabetes, but that’s neither here nor there.

As it is, my necromancer is currently languishing in the early days of act five, and I’m not sure she’s going to progress much beyond that.

Of course, the necromancer wasn’t the only thing included in patch 2.6. There’s also the new adventure mode zones, Shrouded Moors and Temple of the Firstborn. 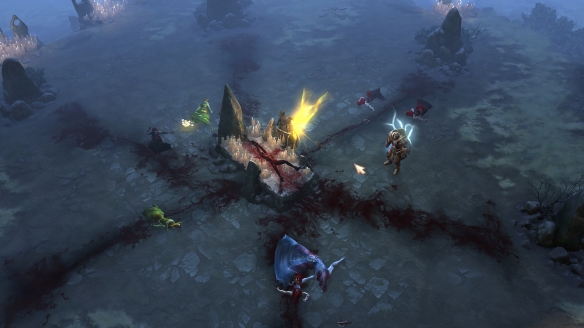 I went into these with very low expectations, but if you ignore the adventure mode trappings and just play through them as linear story content, you’ll actually get a solid, atmospheric, and satisfyingly complete story. This is in stark contrast to the deliberately obtuse Greyhollow Island and the utterly pointless Ruins of Sescheron.

The presence of Obvious-Traitor McSinister-Guy is a bit much, but otherwise it’s a good ride. And the environmental art is gorgeous.

Sadly, it only takes about thirty or forty minutes at the outside to finish, and it has no meaningful replay value. In the end, it’s only a reminder of the kind of great story-telling Diablo III could be doing if they actually put any effort in.

2 thoughts on “Diablo III: All Must Serve the Cycle”