Like most gamers, I’m counting the days until the release of Mass Effect: Andromeda (or until my new computer arrives, if that turns out to be later). In the meanwhile, I decided to make a short return to World of Warcraft to get caught up in the game before the release of patch 7.2, which should come right as I’m in the thick of Andromeda. 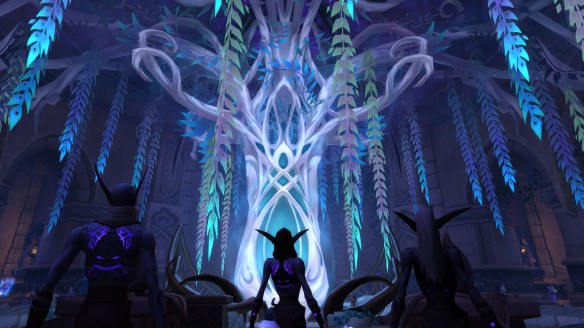 My biggest goal with this return visit — and one I accomplished much sooner than I expected to — was to finally finish off Suramar, both the initial reputation grind and the additional storyline added in patch 7.1.

Taking a break in the middle of the storyline probably didn’t help my impression of it, though admittedly it was rather disjointed to begin with due to all the reputation grinding between story arcs. I will say that I quite like the twist with Arluin. At first I thought, “Oh, this is such a cheesy, generic twist. The seemingly heartless rogue isn’t so bad after all.”

Well, I was right about the second part, but then came the follow-up quest afterward, and I realized Blizzard was being a lot more clever than I gave them credit for. Well played, Blizz.

That leaves the post-launch storyline, Insurrection. I feel like I should have loved this story, as it seems like exactly the sort the sort of thing I’m normally into. It’s almost pure story, and it’s basically Elfapalooza 2017.

But while I don’t have any big complaints about it, I can’t say I was blown away by it, either.

One thing that I found jarring was the presence of what I’m going to call “micro-grinds” breaking up the story. Every so often the storyline would come to a screeching halt as I was sent off to do arbitrary numbers of world quests or order hall missions. 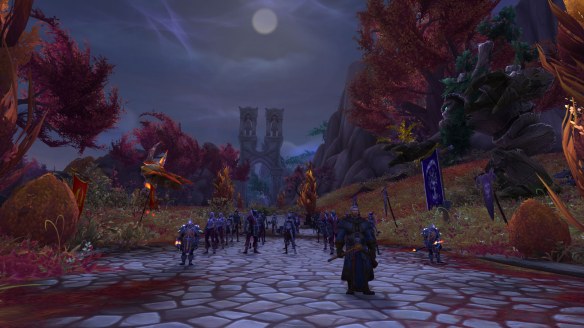 None of these tasks took very long, and by WoW standards — or really any standard — they’re hardly onerous, but they did throw off the pacing, and I just don’t understand why Blizzard included them at all. The questline was originally gated on a weekly basis, so it’s not like they extended the life of the content any. Are the WoW devs just so addicted to grind they’re now physically incapable of designing anything without it?

I think the lack of good soundtrack in Legion that I’ve touched on before also hindered Insurrection. The grand and terrible events of this arc deserved some epic musical accompaniment, but most of the time, it’s just the standard Suramar ambient soundtrack, which isn’t terribly inspiring.

And I must admit the premise of a corrupt government selling out to a foreign power and then commencing a totalitarian crackdown while fueling the flames of xenophobia is hitting a little too close to home these days.

But more than anything I think I’m just tired of Suramar. It’s a great example of the sort of thing I’ve been complaining about pretty much since I started playing WoW. Blizzard will design amazing content, and then they’ll make you hate it. Suramar is an absolute triumph of game design in so many ways, virtually unmatched in my extensive gaming experience, but after weeks upon weeks of mind-numbing grinding within its twilit streets, I’ve just had enough.

Again, none of that is to say I didn’t enjoy the story. It just didn’t blow me away, even though in theory it really should have.

Honestly I think my favourite part was the banter between Valtrois and Stellagosa. I know some people have been shipping Kor’vas Bloodthorn and Stellagosa, but now I’m wondering if Stella/Valtrois will rise as a rival ship. I’m still not sure I’m on board with Dragons dating humanoids, but those two definitely have chemistry, I’ll give you that.

Also it was nice to see the Blood Elves taking an active role in the story, and especially nice to see Liadrin out and about. I’ve always felt she had such potential, and while her role in Insurrection doesn’t entirely make up for her neglect, at least it’s something.

The Nightmare to the Nighthold:

This visit also allowed me to experience Legion’s raid content for the first time.

Somewhat like Insurrection, the Emerald Nightmare has no crippling flaws, but failed to particularly impress me, especially after so many years of hype around the concept. I did think the ending after the Rift of Aln was a nice touch.

Trial of Valor I like a bit more. It’s a nice solid wrap-up to Stormheim’s story, the fights are decent, and it drops some very pretty gear.

I kind of wish Blizzard had the courage to do more small-scale content like this. It’s not evil to reuse art assets or have small raids you can finish in an under an hour. It might be a problem if that’s all Blizzard did, but as a supplement, humbler offerings like Trial of Valor add some welcome texture to the game.

Now I’m really sad we never got that Abyssal Maw raid in Cataclysm.

But undoubtedly the crown jewel was the Nighthold raid. Now that impressed me.

I think my favourite part has to be the Star Augur fight. It’s been a long time since a raid boss in WoW really wowed me (no pun intended), but this is a hell of a fight. While it’s ostensibly an illusion, in effect you spend the fight warping through space, arriving at a succession of increasingly hostile and alien worlds. The glimpse of the Void near the end is genuinely horrifying.

Most of the other bosses are solid, too. The voice actor for Trilliax was clearly having way too much fun with the role.

Only one I didn’t really like was Botanist Tel’arn. Annoying voice-overs, unremarkable mechanics. I also don’t think that Elisande or Chronomatic Anomaly quite lived up to the potential inherent in their concepts — last time we fought a boss with powers over time it was a vastly more entertaining experience.

I am curious why Elisande couldn’t see any future where the Legion didn’t win. Are we as players so awesome we broke the space-time continuum? Did the Demons trick her somehow?

Probably the latter. She did have frickin’ Tichondrius camping out in her guest room.

The Nighthold concludes with our long-awaited confrontation with Darkness Incarnate himself. The fight might not be quite as spectacular as Star Augur, but it’s still pretty impressive, and the cinematic at the end (a cinematic for a first tier raid!) was awesome. Like a lot of Legion, it did a good job of playing to nostalgia without using it as a crutch, and it was incredibly satisfying all around.

Just a bit of a shame it spoils the end of the Light’s Heart quests, as I hadn’t finished the grind for that yet.

Again, why did this need to be a grind? I actually like chain-running heroics, so the grind hasn’t really bothered me in this case, but I don’t understand the rationale. It’s a story quest with no significant power rewards. Why does it need to be such work? Or any work at all?

Few other random things to note about my vacation to Azeroth.

I got my first legendary item of the expansion, the Pillars of the Dark Portal, despite putting no significant effort toward getting one. I honestly didn’t think I’d get ever a legendary in Legion.

It’s a bit of a weird feeling, really. My philosophy has always been that I’m opposed to exclusive content, but in favour of exclusive rewards. I’m honestly not sure someone like me deserves legendary gear. But then again I suppose the Rubicon was already crossed when they Oprahed the legendary cloaks back in Pandaria.

The whole thing was rather an underwhelming experience, which I guess illustrates how much of a non-event legendaries have become. The special power for this particular legendary is so niche as to be virtually worthless (though the raw stats still make it a huge upgrade), and there’s no fanfare, not even an achievement. It just appeared in my bags like any other random piece of loot.

Meanwhile, in my absence Blizzard went ahead with the plan to allow people to convert WoW Tokens to Battle.Net Balance, meaning you can now pay for most anything Blizzard offers with WoW gold, at least in theory. This was followed by a massive upswing in Token prices.

I had feared I wouldn’t be able to continue paying my subscription with gold, let alone buy anything else with it, but it seems I may have underestimated just how easy it is to make gold these days. Despite putting only the barest minimum of effort into farming, I’m ending the month with three Tokens, which means at the very least my sub is safe for a while, and in the long run I may earn enough of a surplus to buy other things, as well. 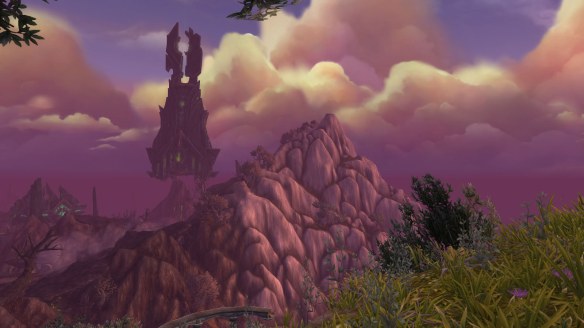 This is a better deal for me than you may immediately realize, because Tokens convert directly to USD. This means I’m not being screwed over by exchange rates, which are getting pretty brutal these days. And it’s not like I’m going to stop spending on Blizzard games anytime soon.

Just the other day they released a new teaser for the necromancer in Diablo III, and while I’ve been hesitant to support what appears to be a largely abandoned game, the preview of the female necro is turning that around a bit. You’re basically playing as an even more badass version of Liv Moore from iZombie; how can I say no to that?

I really wish I’d known they changed it to let you have more than one unused Token at a time before now. I could have bought two or three Tokens before my sub lapsed the last time, back when they were still relatively cheap. It’s strange I never heard about the change; I’m usually pretty good at keeping up with WoW news, even when I’m not playing. But what’s done is done, I guess.

Now I just hope that Token prices don’t get much higher.