iTunes is taking its sweet time posting Dark Matter again, so in the meanwhile, enjoy this post I wrote back in June (yay backlog):

Every MMO has a place where players end up congregating, the main social hub of the game. For The Secret World, that’s Agartha — Hollow Earth, Yggdrasil, the Immaculate Machine.

Cramming dozens of bored players into a small space inevitably leads to some silliness or odd moments, but for whatever reason, Agartha seems a bit more… colourful than its equivalents in most other games.

This is impressive, but as you’ll see, Gangnam Style flash mobs are far from the strangest thing you’ll see in Agartha.

Of course, sometimes I’m the oddball in Agartha.

This is quite possibly the weirdest damn thing I’ve ever seen in a video game. Might have been the weirdest thing I’d seen period, but I used to live in Parkdale.

A bunch of players, all in Atenist garb, /worshipping a girl in a bikini and chanting “ATEN! ATEN! ATEN!” 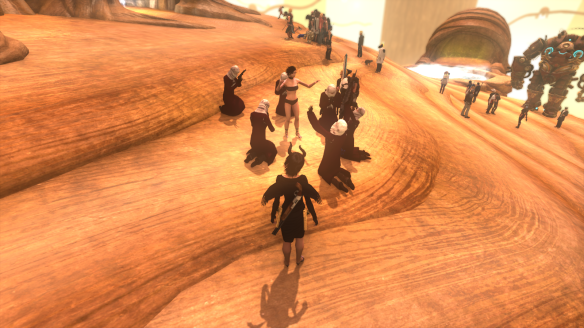 The thing about this is that their emotes and chanting and positioning were all synced very well. This must have taken some significant effort to organize so seamlessly. It was probably not a random gathering.

I asked around in general chat to see if anyone could explain what was happening. No one offered any insight. It mystifies me to this day. 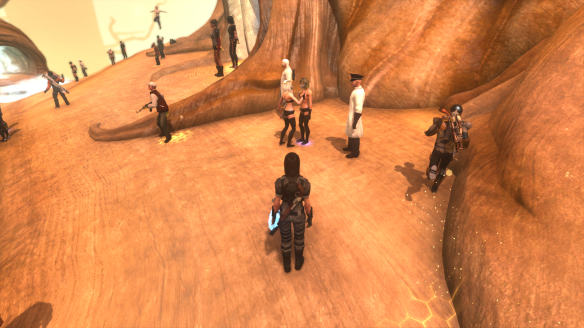 These two were engaged in what appeared to some sort of strange ERP. Every time I logged in over a period of at least twenty-four hours, they were still there. I’m just impressed by their sheer endurance.

As you can see, you get a lot of that in Agartha. 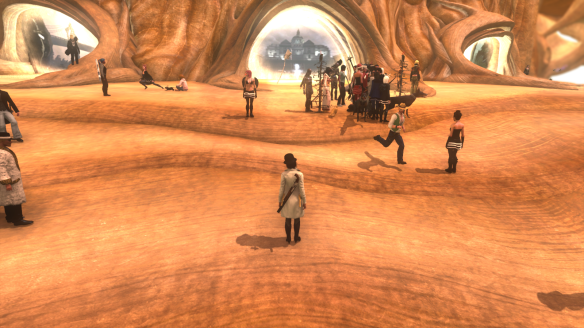 This is what we call the “hug pile.” During holiday events, people will smash themselves together in the hopes of having people dump loot bags for them for the achievement. It’s a subject of some controversy in the community. Personally I think it’s terribly boring, but if people want to get their achievement that way, then fine.

For my part I prefer to be more creative or social. Usually I’ll round up a gaggle of newbies in Kingsmouth and dump the loot on them. One time a person who was on their free trial got an epic zombie polar bear pet from one of my bags. That felt good. 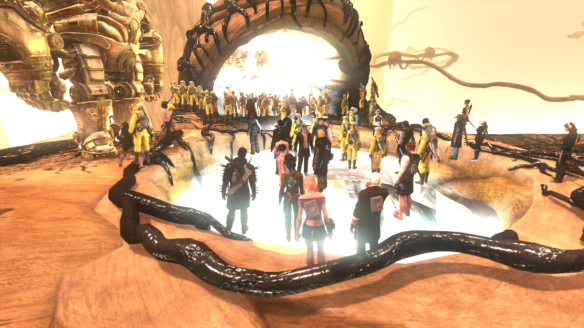 The Whispering Tide event added its own special flavour to Agartha.

After a few years of living with this endless weirdness, Agartha has become almost as much a selling feature of TSW for me as the incredible story or unique character progression. People watching in Hollow Earth never quite gets old.