Regular readers will know that, as a rule, I’m not much interested in achievements in video games, but that I make an exception where StarCraft II is concerned.

To that end, I have shed much blood, sweat, and tears completing each of its installments on the highest difficulty setting, aptly called brutal.

It wasn’t until two years after the game’s release that I earned my brutal completionist achievement for Wings of Liberty. I might have done it sooner, but technical issues forced me to repeat several missions — a very frustrating setback. It was a long, hard-fought effort, and very gratifying once complete.

Prior to the release of Legacy of the Void, I did a second play through of Heart of the Swarm to refresh my memory of the story, and I decided to do it all on brutal. It proved easier than Wings of Liberty had been, being barely more difficult than playing on hard.

And now we come to the present. Over the last few weeks, I have done a complete play through of Legacy of the Void, the final expansion, on brutal, and now, at last, I’ve completed it.

The journey is over, and I stand victorious.

Victory against all odds:

Let me tell you: After going a bit soft in Heart of the Swarm, they meant business this time.

I knew things would be different by the second mission. All I can make are zealots and stalkers with no upgrades of any kind, and they throw ultralisks at me.

You have to respect that level of evil.

There were still a few “easy” missions (I use the term loosely), like Templar’s Charge and Purification, but on the whole, Legacy of the Void on brutal was an incredibly nail-biting experience from beginning to end, perhaps exceeding even the challenge of Wings of Liberty. Probably didn’t help I made it harder on myself by trying to get as many achievements as I could along the way.

Last Stand, in particular, is a mission I would be happy to never repeat again. I learned the hard way that I am not able to complete that mission on brutal while also completing the bonus objective. I was forced to complete the mission on hard for the sake of the solarite, then repeat it on brutal via the archives, that time ignoring everything but survival.

There were other harsh challenges along the way, as well. Brothers in Arms proved tremendously difficult, and only a last ditch run to the Keystone during a disruption wave saved me. Even then, it took multiple tries to pull it off. But a win’s a win. 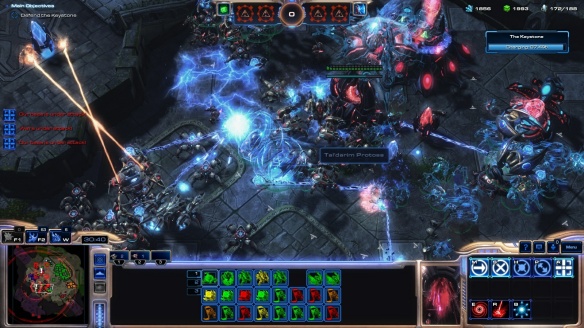 The greatest challenge of all, though, came from the final mission of the main campaign, Salvation.

It nearly broke me.

After many reloaded saves and trying everything I could think of, I just could not make it past 90% completion. So I returned to the Spear of Adun, selected totally different units and abilities, and tried again.

To my shame, I was forced to turn to Team Liquid and read what players there had attempted. One odd but popular strategy was to simply mass corsairs and Dark Templar. Not something I ever would have considered, but I resolved to try it, lacking better options.

And amazingly, it worked. I wouldn’t call the end result easy, but it wasn’t as bad as Last Stand, that’s for sure. Because there are so many chokepoints on that map, the enemy can’t escape the corsairs’ disruption webs, and they’re just target practice for your army at that point.

I also heavily abused the mothership’s black hole ability, and I kept a small cohort of arbiters in reserve to put enemies in stasis when I needed to buy time. This mainly came in handy during the last few moments of the mission, when my defenses at last broke under the onslaught.

Finally, I tried to erect strong static defenses at all three entrances, though I could never quite get the Purifier base’s defenses to last. I still managed to preserve their base, though.

I can’t tell you what a relief it was when the achievement finally popped up.

All in all, it was a rollercoaster. It’s a strange experience; at times, working through these missions was incredibly frustrating and stressful, but it could also be spectacularly thrilling, and sometimes even the frustration was in and of itself a sort of thrill. Each mission becomes a puzzle to be solved.

At times you really do start to feel like a real battlefield commander. I found myself spending much time planning my strategies even outside the game.

“I’ll reinforce the Nerazim base with static defense, and station the mothership there as further insurance. I’ll fortify the Purifier encampment, and keep a squad of arbiters in reserve. Meanwhile, the bulk of my forces will hold the Tal’darim front, sending out sorties to the other fronts as needed.”

I had initially planned to do the epilogue campaign on brutal, as well (as I did with Whispers of Oblivion), but there’s no achievement for that, and frankly, my strength is spent. I have completed the main campaign for each race and each expansion. I have defeated seventy-one missions of one of the modern era’s most challenging games on the highest possible difficulty. I think my mastery has been proven.

Of course, while working on completing the campaign on brutal, my lust for achievements rose full force. I tried to get as many campaign achievements as I could along the way, even repeating a few missions via the archives to grab specific achievements, but even that was not enough.

I also worked on bolstering my achievements for the multiplayer and co-op missions categories enough to unlock the tier one medals for each. Along the way, I learned that I find most of the co-op commanders fairly dull, but surprisingly I kind of like Zagara, despite my usual dislike of Zerg. Vorazun remains my favourite by far, however. Love playing as her.

This all seems a bit strange at face value, given my usual disinterest in achievement-hunting. But StarCraft is special.

Too often, achievements are merely participation trophies. They’re measurements of how much you’ve played the game, not true accomplishments. It rather cheapens the whole concept.

But in SC2, achievements tend to more often be, well, achievements. And perhaps more importantly, it is a game that is both quite challenging, and challenging in a very pure way.

In StarCraft, there is little element of chance, no grinding for more power, and rarely any way for other people to directly help you. You can’t just level up a few times, come back, and faceroll something that was once challenging, nor can a friend carry you through.

When you think about it, there aren’t many “pure” gaming experiences like this left. The proliferation of RPG-style progression and multiplayer support have a lot of positives, but they do rather cheapen the challenge of gaming, I think.

RTS stands as one of the few remaining bastions of games that are purely tests of skill. I suppose shooters sometimes are, as well, though they often feature a fair bit of RPG-style progression these days, but shooters are mostly tests of twitch reflexes and agility.That’s all well and good, but RTS games test reflexes, agility, multi-tasking, planning, strategic thinking, and more.

RTS titles are also a little less “all or nothing” in their challenge than other genres. Eventually things can cascade to the point where you just lose, but there’s a lot of gray area. You can lose battles but not the entire mission or match. You can recover from mistakes. Whereas in most RPGs, for example, you die, or the boss does, and there’s no middle ground.

Nor is there any special punishment for failure. If you lose, just start over and try again. No repair costs, or corpse runs, or any of the other unnecessarily punitive measures you tend to see in, say, MMORPGs.

This is why, even if I enjoy playing other genres just as well, RTS remains the genre of gaming I most respect.

And this is why StarCraft has me addicted to achievement-hunting. Alone among the games I play, SC2’s achievements feel like true accomplishments. I normally scoff at the idea of taking pride in one’s gaming accomplishments, but considering the test of wits, reflexes, planning, and multi-tasking that StarCraft represents, I will allow myself a small measure of pride in what I have achieved.

By the way, if you’re wondering why I haven’t mentioned the new Nova DLC yet, I’m waiting until all three parts are out to play it.