In the past few weeks, I have completed not one, not two, but three separate legendary quest chains in World of Warcraft. My rogue has claimed both the Band of the Archmage and the Fangs of the Father, while my warlock is now the proud owner of Dragonwrath, Tarecgosa’s Rest. 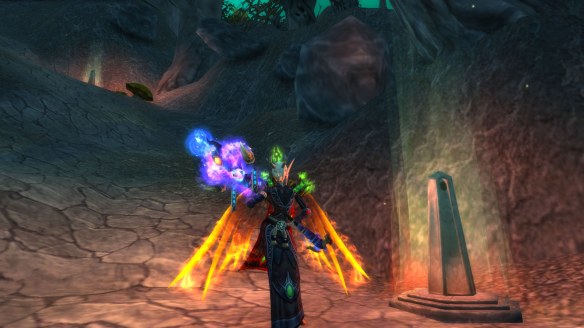 I now present to you my thoughts on the three quest chains, as well as on the process of grinding for high level rewards in general.

Fangs of the Father:

Man, this was a journey. I wonder if anyone around today has been reading this blog long enough to remember Operation: Payoff?

Either way, this is a process that began all the way back in patch 4.3. The quest lay forgotten in my log for much of the final days of Cataclysm and nearly all of Mists of Pandaria, until I could finally solo Dragon Soul. Then it was a matter of some weeks of grinding to upgrade my daggers to their ultimate, legendary state.

On the whole, this was my favourite of the three legendary chains. Wrathion is a very entertaining character, and Dragon Soul remains one of my all-time favourite raids. While I did get a bit sick of it by the end, mostly I enjoyed revisiting it.

By legendary standards, the quest didn’t feel like too much of a grind, either. Dragon Soul is pretty quick to breeze through, especially as a rogue, and there aren’t too many hoops to jump through.

My only major complaint is that the daggers actually look less cool with each upgrade level. The legendary versions are downright hideous. Shame you can’t transmog legendary items.

Band of the Archmage:

Conversely, this was the least interesting of the three legendary chains. Khadgar is amusing, and getting to interact with Garona — albeit an alternate universe version — was somewhat cool, but on the whole the story wasn’t that interesting.

It certainly pales in comparison to the excellent storytelling present in the quest line for the Shroud of the Celestials back in Pandaria.

It’s funny because I seem to remember Blizzard saying that they liked the epic storytelling and solo changes of Shroud of the Celestials, but wanted to de-emphasize the repetitive grinding for the Warlords of Draenor chain, but that’s the exact opposite of what happened.

In WoD, it was basically nothing but grinding. Oh, we got a few story moments and solo boss fights, but they were all quite brief, easy, and generally underwhelming. Mostly it was just a lot of endless raid grinding.

The overall chain actually didn’t take me all that long thanks to the garrison, catch-up mechanics added over the course of the expansion, and the short length of WoD as a whole, but it still felt like a massive slog to me.

I considered giving up many times. Only a desire to have not wasted the effort already put in and my own perverse completionism kept me going on.

It also needs to be said that the legendary ring itself is a great disappointment. The “awesome effect” we were promised turned out to be an ugly reskin of a disc priest bubble, and you can’t even control your own ring in a group because they’re all tied to everyone else in your raid. And while solo, the ring’s effect is quite weak.

This one I have more mixed feelings on.

On the one hand, the story is pretty good. I’m still not entirely clear how or why Kalecgos opted to fuse a dead Dragon’s soul on to me, but otherwise it’s a nice chapter of the Blue Dragonflight’s history. Some of the challenges in between the more grindy phases were also pretty fun. Loved the revamped Nexus.

I also got to spend a lot of time in Firelands, which is a raid I quite like and regret not seeing more of back in Cataclysm.

But by “a lot” I mean “ultimately too much.”

Even by legendary standards, this quest chain was a horrible grind. Three separate multi-week stages involving repeating the same raid over and again is just brutal. I may like Firelands, but by the end I just utterly fed up with the place.

The staff is pretty cool, and I like the mount effect. Shame it’s tied to the staff and not just something you can store in your mount journal and add to your action bar, though.

Unfortunately, after all this, I am not left with a sense of accomplishment, nor much joy in what I’ve gained. Mostly I’m just relieved it’s over.

I am reminded of why I almost never pursue long term or difficult goals in MMOs. The reward almost never matches up with the amount of effort needed to get there.

I have to wonder: Is grinding ever worth it?

I’m not talking about spending lots of time doing something you enjoy anyway. I have no regrets over getting 100% ability wheel completion in The Secret World because I achieved that simply by playing the game as I normally would.

No, I’m talking about forcing yourself through content long after you’ve stopped enjoying it — if you ever did — just for the reward at the end. In theory, this is supposed to give one a warm sense of accomplishment, but it doesn’t seem to work out that way. Whatever sense of accomplishment you might have always ends up being dwarfed by the vague unease over how many hours of your life you’ve wasted doing mindless, repetitive tasks for the promise of a few pixels.

I mean, I am glad I did these chains… but more out of a obsessive need to not feel like I’ve missed anything than because the experience was so special. I do like having the items, and every chain had at least a few moments I truly enjoyed, but in the end, I’m not sure any of them are worth all the time and headache.

If nothing else, at least I can enjoy being a god in timewalking dungeons. With her Fangs, Shroud, and Band, my rogue can sometimes end up doing as much or more damage than all the other players in the party combined.