This week saw the release of the final major DLC for Dragon Age: Inquisition, Trespasser. This follows closely on the heels of another story-heavy DLC, The Descent. 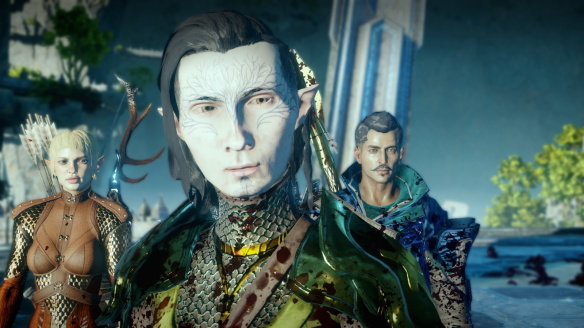 The Descent was excellent, and Trespasser was even better — an epic and emotional tour de force that is quite possibly the highlight of the entire Dragon Age franchise to date.

(Note that I do not own and have not played the Jaws of Hakkon DLC, but I did watch a friend livestream it in its entirety over the course of a few weeks.)

You may recall from my original review that I left Inquisition with somewhat lukewarm feelings. I felt it was a major improvement over past titles in terms of game mechanics, and that it had some impressive highs, but that an excessive amount of filler content and some other hiccups held it back a lot.

But Descent and Trespasser were so fantastic that it’s completely reignited my passion for Inquisition, and now I’m wondering if I’ve underestimated the game… or if this is just a passing fancy.

I’ll be writing this post assuming that the reader has played all of Inquisition, including the DLC, so expect some spoilers.

At this point I think we can safely say that Inquisition was released unfinished. It’s amazing that a game as vast and detailed as this one could still be incomplete, but it definitely was.

The original ending to Inquisition was an anticlimax. It was entirely too quick and easy, it lacked emotional weight, and it left many important questions unanswered.

Trespasser was the ending the game needed. It offered emotional send-offs for all the major characters, a thrilling and intense climax that did not feel at all rushed, major revelations that have completely upended everything we thought we knew about the history of Thedas, and tantalizing hints of what is to come.

While not as crucial, Descent also provided some useful clues to making sense of Inquisition. One of the big things the main game left me scratching my head about was red lyrium, the nature of which was never fully explained. We learned that it’s lyrium that’s been infected with the Blight, but that made no sense at the time, seeing as the Blight infects living things and lyrium is a mineral.

But now we know that lyrium is the blood of a Titan, so now things make sense.

Some might be upset by having to buy a couple DLCs to get the full Inquisition experience, and I certainly wouldn’t blame them for feeling so, but personally it doesn’t bother me that much. If the end product is good, I don’t mind forking out a little extra dough. 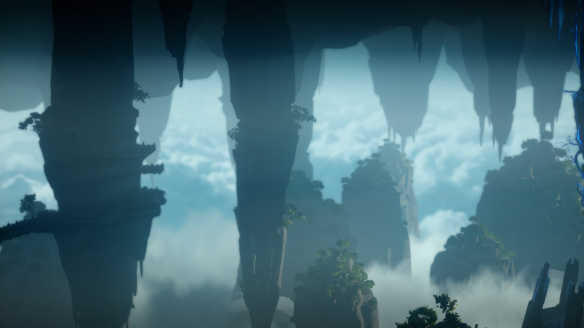 The ending always has a profound impact on how one views a story, and I think the weakness of the original ending was a major contributor to my ambivalence towards Inquisition. Now that there’s a better ending, my opinion of the game is much higher, but much of my complaints about Inquisition still hold true, and I do have to wonder if this will last once the high from these DLCs has worn off.

That might take a while. Trespasser rocked my world.

Trespasser was almost entirely Elven lore, so maybe it’s not surprising I loved it so much.

It’s not just the info-dumps, though. These events play so well into the development of my inquisitor it’s like Bioware wrote it for me.

My inquisitor is a Dalish Keeper. There is nothing more important to her than her people and her culture. She and Solas hit it off right away, and they remained close up until he suddenly left the Inquisition.

And even when she learned the truth, and the terrible things he had done and still wanted to do, she almost wanted to join him. There is nothing in the world that she wants more than the restoration of her people.

She doesn’t care that it would kill her. She would give her life for a reborn Elvhenan without a second thought. Nor would she shed a tear if the corrupt nations of the shemlen were to drown in fire.

But there are people in this world she cares about. When her clan died, those close to her in the Inquisition became her clan, her family. She cares deeply about Sera, Dorian, Thom Rainier, Varric, and the Iron Bull, and she cannot let them die.

So now she could not be more torn. A man she loves as a brother plans to bring about that which she spent all her life dreaming of, but the price is just too high to pay, and now she has to stop him, and save him.

The writer in me is just squealing in joy over what a fantastic character motivation that is.

The ending has led me to believe we will be able to continue playing as our inquisitor in the next game, and I will be profoundly disappointed if this is not the case. I’ve never liked abandoning the player characters after each Dragon Age game, and at this point in the story it just doesn’t make any sense not to continue with the inquisitor, if you ask me.

Something else Trespasser has made me reexamine is Sera.

Now, I knew I was going to like Sera from the moment she was announced. A chaotic good Elven archer? That’s all I need to hear.

But when the game came out, she didn’t quite live up to expectations. I did like her spirit of joyful rebellion and her passion to fight for the little guy, but there was much about her I found off-putting. She was too crude, too childish, and her disdain for her own people was equal parts confusing and off-putting.

If I was playing as a dude, I would have romanced Dorian instead, but I’d already rolled a girl, so I decided to press ahead with my original plan of romancing Sera. Let me tell you, it’s not easy to win over someone who fears magic and disdains Elven culture when you’re a Dalish Keeper.

But eventually she warmed up to me, and as she began to open up, I began to understand her. At first glance, Sera seems so simple and shallow, but nothing could be farther than the truth. She is an incredibly complicated person, and even when her behaviour seems utterly random and nonsensical, there is often a deep and powerful meaning to what she does. She just has a very difficult time expressing herself in appropriate ways due to her youth and lack of a proper upbringing.

As an aside, it’s this ability to gain a deeper level of insight into characters that ultimately sold me on the concept of in-game romance, which I initially found odd and perhaps a little creepy. 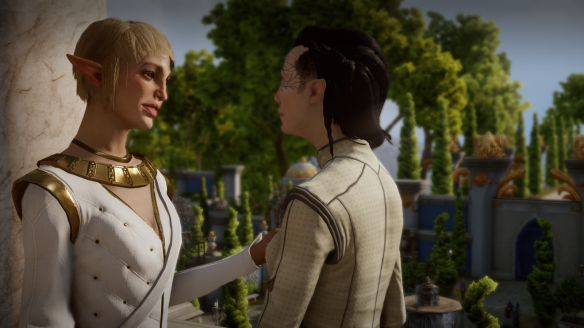 Coming to understand why Sera is the way she is, as well as how big-hearted she is, improved my view of her somewhat, but it wasn’t until Trespasser that I came to love her character as much as I expected to when she was first announced.

I came to the conclusion a while ago a lot of the reason Sera is so rough around the edges is simply that she’s basically a kid. I often wondered if she would mature as she got older.

The answer is yes.

In Trespasser, it became clear that Sera’s positive attributes — mainly her kind and loving nature — have won out over her rougher aspects. Oh, sure, she’s still cursing all the time and drawing butts on everything for some reason, but where it counts, she’s grown up.

What impressed me most was that her Elf-hate, the one thing that still really bothered me about her, had softened. She was using her Red Jenny network to track down survivors of my clan — all on her own, without prompting — and even more amazingly, rather than gloat over the loss of everything the Dalish once believed in, she simply offered my inquisitor a proverbial shoulder to cry on.

It was so gratifying to see Sera evolve like this, and it’s this kind of stellar character development that keeps me playing Bioware games despite their many, many flaws. 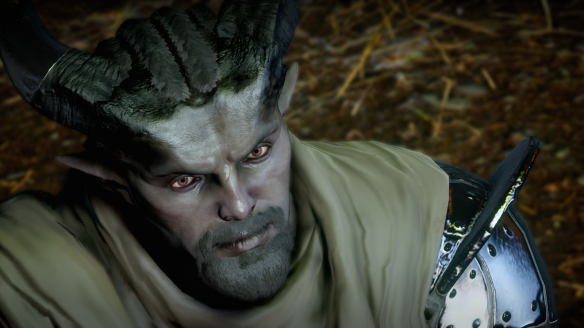 My eyes now turn to the future of Dragon Age and my relationship with it. My love for Trespasser has inspired me to do something I never expected to do (at least not any time soon): Start the game over with a new character, a Qunari rogue.

I don’t know if this will last. Inquisition is vast game, and there’s a pretty good chance I’ll just lose interest — which is what happened when I tried to play DA2 a second time. I really don’t relish doing all those side quests and other chores over again. I know I could skip them — I probably will skip collecting shards, at least — but it’s just so hard to resist the completionist in me.

I will be taking it easy. I think playing Inquisition largely to exclusion of other games the first time led to a lot of burnout and may have given me an unfairly negative view of it. Since Inquisition plays more like a single-player MMO, perhaps I should have adopted the more laidback attitude I use for them.

If I do continue, I have to decide whether to side with the Templars are not. I feel I should see the other side of the story, but I hate the Templars and everything they stand for.

As for the franchise as a whole, well, it’s already pretty much confirmed we’re going to Tevinter. I think the inquisitor will once again be the protagonist (they damn well better be, anyway), and that we’ll be mediating the Tevinter/Qunari war in much the same way we did with the Templar/mage war, with Solas playing a similar role to Corypheus.

I think Scout Harding will be a party member in the next game, and probably a full romance option. She seems a very popular characer (rightfully so), and I don’t think they snuck her into the final cutscene for nothing.

I think Dorian will play a major role, but not be a party member. Probably his role will be analogous to, say, Leliana’s in Inquisition. We’ll probably have the option to make him ruler of Tevinter at the end.

I very much hope that Sera will return as a major character. I’d like to believe her mentioning that she’s already visited Tevinter is foreshadowing of some sort. I also hope we get to explore her magical talent — or whatever she has. I’d also love to see Bull, Thom, and Varric again, but based on their epilogues, that seems fairly unlikely — especially for Varric.

I’m also hoping the inquisitor gets to graft a giant sword to their stump like Kargath Bladefist.

Whatever may come, Trespasser has left me far more excited for DA4 than I have been for any other Dragon Age game to date.

9 thoughts on “Re-examining Dragon Age: Inquisition: The Trespasser, the Descent, and the Wildcard”