I find myself in an interesting position just now. For the first time since I started playing, I am missing out on the launch of a new World of Warcraft expansion, having cancelled my subscription shortly before the release of Warlords of Draenor. I don’t intend this to be a permanent departure; I just didn’t feel right paying 25% more for an expansion that seems to remove as much as it adds. I’ll be back once the price drops and/or Blizzard shifts their designs back to something more palatable.

But like a heartsick man lurking on his ex’s Facebook page, I am maintaining a close eye on the Warcraft community to see how WoD is being received. It is somewhat interesting to be seeing the expansion entirely through the eyes of others.

It is of course difficult to get an accurate picture this way. There is the temptation to declare the reception of WoD to be overwhelmingly negative, but it is important to remember that discussions online always have a negative bent, because those who are happy are busy playing rather than posting on forums.

I also have a certain bias, because I go into this expansion with a very low opinion of it. I am not happy with the decisions Blizzard has made in regards to Warlords of Draenor, either in terms of lore or gameplay. So naturally I’m biased to seek out opinions that align with my own, negative, view.

With those caveats out of the way, I now present to you my views on WoD so far, based entirely on secondhand reports.

Launch and the population spike:

It’s hard to say whether the launch of WoD is more good news or bad news for Blizzard. On the one hand, it was a trainwreck of epic proportions, by all reports. On the other hand, part of that is because so many people have returned to the game for the launch. Last reports have WoW back at ten million subscribers, numbers not seen since the launch of Mists of Pandaria.

Both haters and fans are eager to use these events to justify their personal narratives, but for my part, I think both are over-blowing things.

I do think it’s embarrassing that a company as successful and as experienced as Blizzard is still having problems like this. They can and should do better.

With that said, though, launches are always going to be somewhat ugly, and it’s all fairly irrelevant in the greater scheme of things. The quality of the expansion is far more important than the quality of its launch.

Conversely, I also think the surge in population is largely meaningless in the greater scheme of things. A WoW expansion always triggers a large surge of population, but if history is any guide, those gains will be very short-lived. Mists also saw a big jump in population at launch, but it didn’t take long for those numbers to crash and crash hard.

World of Warcraft is a game a lot of people have a lot of nostalgia for, and when a new expansion launches, it gets people curious to check out the old flame. Most will then leave once again when they realize WoW is still WoW. It’s unlikely Blizzard will ever overhaul the game enough to win back a significant quantity of those who have decided WoW is no longer for them, and I certainly don’t think Warlords of Draenor is the expansion to do that.

Perhaps not surprisingly, the inability to use flying mounts on Draenor remains the expansion’s greatest controversy. It’s been over a year since the announcement was made, and discussions of it are still cropping up constantly.

This is probably as close to unanimous opinion as I have ever seen in the Warcraft community. Even Pandaria’s dailies — which are now widely acknowledged to have been a mistake — had much more and more vocal fans than a world without flying does.

This comes as no surprise. Many people, myself included, have argued that turning off flight after making it a mainstay of the game for the majority of its lifespan will do no good at all. It’s only common sense.

Yet Blizzard ignored all feedback on the matter, just as they did when those of us in the Mists beta overwhelmingly argued against the daily grind. “You’ll like it once you try it,” they said, blithely ignoring the fact that we have all tried it every time we level a new alt. Now people are living it live, and despite Blizzard’s words to the contrary, opinions have not changed.

I maintain what I have said from the beginning: This will come to be remembered as the greatest blunder of Warlords of Draenor. Flying will return, and this experiment will not be repeated again, though they might come up with another equally whacky way to try to fix something that was never broken.

Something else which is a matter of some controversy is whether there’s enough to do in WoD. Certainly as an outsider it appears to me to be far smaller and less ambitious than previous expansions, and I have seen many people complain they’re already running out of things to do.

It’s hard to say whether these criticisms are valid are not, because bored WoW players are like depressed teenagers. That’s kind of their nature. If you’re on a WoW forum and no one says they’ve run out of things to do, you’re not on a WoW forum.

However, there are some elements of these discussions I find telling.

What makes me think there might be something to the idea that WoD is a lacking expansion is not the arguments made for that notion, but those against it. I’ve seen people rattle off very long lists of the innumerable activities there are in Warlords of Draenor… but at least half the things mentioned tend to be things you see in every expansion (gee, raids, that’s new and exciting), some even count the content of previous expansions, and often garrisons get counted multiple times in such lists.

You can level your buildings, and you can level followers, but those are both just parts of managing your garrison. Listing those as separate activities seems to me a bit like listing killing trash and killing bosses as separate things, when they’re both just parts of running dungeons. It certainly doesn’t counter the prevailing perception that WoD has little to offer beyond garrisons.

The extent to which facts need to be twisted to show WoD as having a bounty of content does not inspire confidence.

The one thing I regretted about choosing to be a late adopter for WoD was missing out on the tenth anniversary celebration. Having read reactions to it, that regret has faded.

The Raid Finder revamp of Molten Core has not been well-received. It has been plagued by game-breaking bugs, and is reported to be extremely over-tuned, to the point where groups are wiping on trash and taking hours to complete it. To add insult to injury, only the final boss drops loot of any kind, making it a long slog for little reward.

Now, the anniversary version of the raid is going to be around for several weeks, and as people gear up, it will get vastly easier. It’s still very early in the expansion, and no one’s geared yet.

But I wonder why that has to be an issue. This is an anniversary celebration; it’s supposed to be a present to the players. Why does it need to present any challenge at all?

Once again, I feel The Secret World has the right idea. That’s a game that’s not at all afraid to challenge its players, sometimes brutally, but when it comes to event bosses, they make them straight up loot pinatas where failure is downright impossible. It’s a nice way to reward players, and give them a break from the more difficult content.

Even calling these “conclusions” is probably a little disingenuous, since I won’t be able to form any really strong opinions of the expansion until I play it. I’m not sure if all the negativity I’m seeing is indicative of an overall failed expansion, or just a combination of the usual cantankerousness of the gaming community mixed with my own bias.

And to be fair, I’ve seen plenty of people expressing a lot of love for this expansion, but at the same time, a lot of them seem the type to just love anything Blizzard puts out because they’re that into WoW. That is not at all a criticism of them; indeed, I envy their ability to simply enjoy the game.

But let’s put it this way: I’ve yet to see anyone articulate a reason for why WoD is better than anything that came before it.

One thing does seem clear to me: Warlords of Draenor is not setting the world on fire. While I’m not sure it has been worse received than past expansions, it certainly doesn’t seem to be any better received. Going in, many seemed to think WoD would herald a renaissance for WoW, and I really don’t think that’s going to be the case.

The only evidence to back such an idea is the surge in population, but that will only mean something if those gains can be maintained for more than a few months. 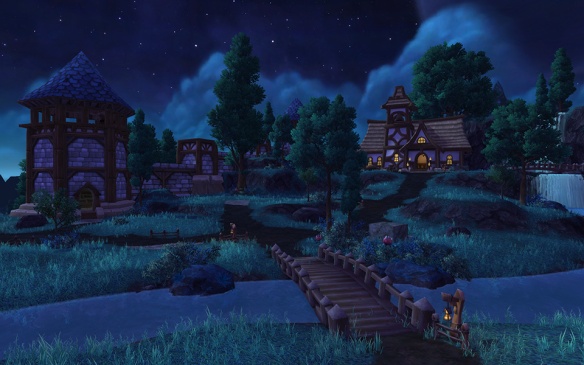 For the most part, it seems as though WoD is just another WoW expansion, with little to distinguish it from its forebears. Whether that’s a compliment or a criticism depends on personal perspective, but I don’t think it’s going to do much in the long to halt WoW’s slow decline, and I think those expecting the second coming of MMO Jesus are destined for disappointment.

5 thoughts on “Warlords of Draenor: On the Outside Looking In”