As you know, my old computer somewhat sucked. I mean, it was a good computer, but it just didn’t have the power to work as a good gaming rig.

Yes, I’m using the past tense.

BEHOLD THE GLORY OF MY NEW ALIENWARE GAMING COMPUTER.

This will improve all of my gaming, but by far the biggest benefit comes with The Secret World. I’ve gone from having abominable lag on even the lowest settings to playing smoothly with everything set to maximum.

By all that is unholy, this game is beautiful. My first five minutes were spent simply gawking and repeating the phrase, “Oh, wow.” 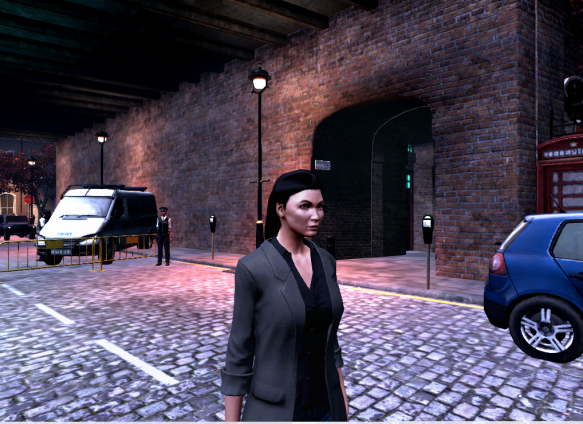 The subtle shadows on her chest are from the moonlight passing through her hair.

I never ran dungeons in TSW with the old computer. With my lag, I would have simply been a liability to groups. But with the new computer, I finally dipped my toes in. I took the unusual step of tanking them so that I could find groups more easily. Also, I so out-gear the dungeons that I would steal aggro from the tank if I tried to DPS, and I have a lot of tanking skills unlocked already.

The dungeons in TSW aren’t as wildly original as the rest of the game. There are differences from the norm, but they’re more subtle. A near total lack of trash, for one. Those of you who loathe trash would definitely enjoy the dungeons in TSW; almost all of each run is fighting bosses. There are also more bosses, making the dungeons feel more rewarding than in, say, World of Warcraft.

But otherwise, they feel pretty familiar. Fire is bad; don’t stand in it.

Like most of the game, the dungeons in TSW are a bit tougher than in WoW. There are no easy mode early dungeons. Polaris was kind of faceroll — at least until the Cthulhu fight — but Hell Raised was definitely not the sort of thing you can sleepwalk through. Ignore boss mechanics at your own peril, even if you out-gear it.

Overall, they were decent experiences. A few of the DPS died in Polaris a few times, but I don’t think that was my fault, and Hell Raised was a bit ugly at first because we didn’t have a healer, but it was fine once we got one. 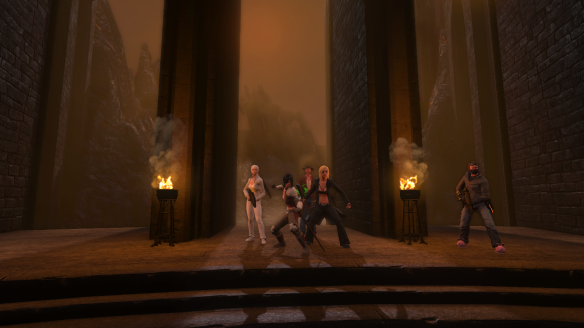 Of the two, I think I liked Hell Raised better. I like the aesthetic of the Hell Dimensions in TSW — a bit post-apocalyptic, a bit gothic, a bit sci-fi, a bit steampunk. Weird, but neat.

I’ll also say that the groups I got seemed pretty nice. They were patient and didn’t yell at me for screwing up a few fights because I didn’t know the mechanics.

With that being said, it was a great moment to reflect on just how much I hate finding groups manually in MMOs. Spamming general chat for half an hour is not my idea of fun. And overall, the dungeons weren’t mind-blowing.

As it stands now, I don’t see dungeons becoming a big part of my Secret World routine. There are a few more I’d like to see for the story — such as Darkness War, because Vikings — but I may not do anymore after that.

It’s also tempting to do the other Hell dungeons, as they make up a largely self-contained story unto themselves, and Wicker is intriguing. He’s… not what I expected.

I also found the time to play through the issue six storyline, The Last Train to Cairo. I probably could have done this on the old computer, but I’m glad I waited. There were several sequences requiring tricky maneuvering that would have been excruciating with the old lag.

I didn’t enjoy this DLC as much as the Tyler Freeborn arc, which I still lack the words to adequately praise. Last Train was fun, but it wasn’t spectacular, and parts of it were rather annoying. Too many infiltration missions in close succession. Plus, I just never liked Egypt or the Atenist story that much.

It had its moments, though. The way they borrowed the combat system from Age of Conan for one sequence was really interesting, and the actual Last Train mission itself was all kinds of awesome. 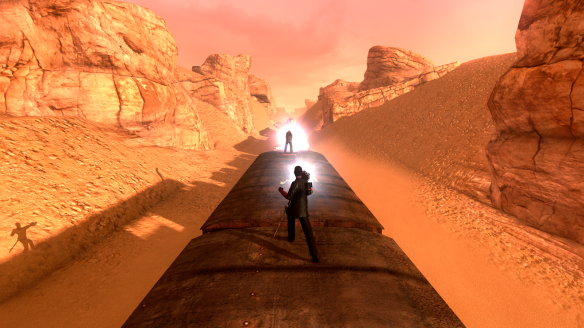 And getting a free epic at the end of the chain was pretty sweet, too, especially for someone with no intention of getting serious about running dungeons or PvP.

Also, Nassir. Dear God, Nassir. Worth the price of admission just for him.

There really needs to be a sitcom starring him and Said. It’d be like the Odd Couple, except one is a mummy from the Old Kingdom, and the other IS THE BRUCE WILLIS, MOTHER****ER.

Oh, and one other thing…

You know that jumping puzzle that stopped me short on my Dragon?

Nailed it in one try on the new computer. Not a single death.