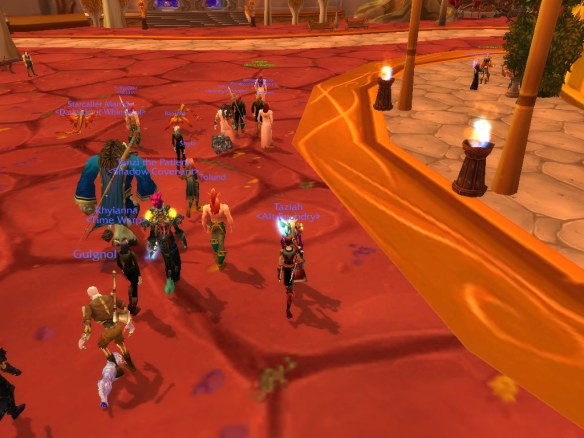 I’m still largely avoiding WoW because I don’t want to be completely burnt out when Mists of Pandaria launches in a few months. But I still log on every few days if there’s something special I want to do, and last Thursday, there was an event that certainly qualified: an LGBT pride march on Wyrmrest Accord.

This was something I had to see. A gay pride march in World of Warcraft is almost an oxymoron. Under normal circumstances, the WoW community is by and large a festering sore of homophobia and bigotry.

So I logged onto my warlock and joined a small but joyous crowd in marching through the streets of Silvermoon.

(As an aside, I question the wisdom of the location choice. Seems to feed into stereotypes a bit too much.)

Not being a member of the LGBT community myself, I was perhaps a bit less enthused with the festivities than most, but it was enjoyable nonetheless. It was very refreshing to see WoW players promote tolerance and understanding instead of hate and ignorance.

We marched from the Bazaar to Sunfury Spire and back, shouting slogans and generally having a grand old time. More people joined us along the way, gradually expanding our small group.

We did get trolled by a few people, such as a level one shouting “pray the gay away” — whether he was genuinely ignorant or just trying to be a jerk was unclear. But we mostly just ignored them, and all things considered, I think the level of harassment was pretty darn small.

Once back at the Bazaar, we partied for a bit, and then everyone decided they were having so much fun they wanted to keep marching, so went back up the Spire, ported to Undercity, boarded a zeppelin, and resumed the march in Orgrimmar.

There, we gathered more players. I didn’t bother to do a proper headcount, but it got to be a pretty big group by the end.

One fellow that I found particularly amusing was a legendary staff wielder in his Tarecgosa’s visage form. He was rather… enthusiastic when we told him what we were up to. Excuse the language as I paraphrase:

That guy was awesome.

We concluded the march outside the front gate of Orgrimmar, where people paused to set out picnic baskets and generally just hangout and have a laugh.

The whole thing took about an hour and was all in all a very enjoyable experience. You see so little positivity of any kind in World of Warcraft. Usually it’s just a see of whining, trolling, bickering, and general asshattery. It was great to see a large group of players celebrating a good cause for once.

Not for the first time, I feel that the money I spent on moving to Wyrmrest Accord was well-spent.

3 thoughts on “Wyrmrest Accord Shows Its Pride”