It may seem like I am boasting in this post. I am not. I am a competent Warcraft player, but nothing more. In fact, that’s my point.

I’m not normally one to comment on or care much about class balance. I’m especially not one to complain about a spec being over-powered when I play that spec, but I’m sorry, holy paladins need a nerf. I know holy radiance got its cost increased in yesterday’s patch, but I don’t think that will be enough.

Let me set the stage. I zone into a Shadowfang Keep PUG. This is probably the hardest non-Zandalari dungeon to heal in Cataclysm. It nearly broke me in my early days of healing. And the group is awful. I mean spectacularly bad. “You can’t make this stuff up” bad.

How bad, you ask? Other than myself, only one person in the party was wearing the right kind of gear: a very under-geared elemental shaman. The rogue was stacking strength, the mage was stacking spirit, and the DK tank was rocking intellect gear like a boss. The group’s total combined DPS was something like 20,000, and the tank got one-shot by trash on at least one occasion.

We get to the first boss, and no one is interrupting anything. The fight takes as long as some Raid Finder bosses. And the rest of the run is just as much of a gong show. The tank’s threat is so bad we might as well have not had a tank. The mobs were beating everyone to a bloody pulp. Fights took forever because our DPS was so low.

And we facerolled it, just because I could heal them through all their stupid. I think we wiped two or three times, and at least one of those was just because I was too busy laughing my ass off at the group’s Three Stooges antics to heal.

I had no right to successfully heal a group that bad. By all logic, that group should have never made it past the first boss. But I got through it without breaking a sweat. We even did Commander Springvale, who I’ve seen crush many a PUG, with no trouble. I never even had to pause to drink.

I’m really not that good. I don’t even use healing addons. I still click for some of my spells. Holy spec is just really, really OP right now, and I happen to have very good gear. Personally, I think our mana regen is the problem. I can use all my most expensive heals non-stop and never go OOM. They should make us have to judge on cooldown again; that’d set things right.

As an aside, while that DK was terrible as a tank, he was also very laid-back and polite, and I enjoyed grouping with him much than some of the indestructible but arrogant raiders I’ve suffered through PUGs with.

Ah, the regret of the flavour of the month roller.

And I also has teh leet deeps:

But I’m not just facerolling my way across Azeroth as a healer. I didn’t want to have to trek back to the transmogrifier every time I got a new piece of gear for my warlock, so before I headed to Northrend, I got all the best epics honor could buy and gemmed and enchanted them six ways from Sunday so I wouldn’t have to replace them for a while. And now I can kill pretty much every quest mob in the Borean Tundra in one or two hits.

Killing WoW quest mobs in less than five seconds really isn’t all that special, but it is rather bizarre for a DoT class, especially considering I’m not even using my pets.

And that brings us to my rogue and her welfare daggers of ultimate stabbiness. In this case, a picture is worth a thousand words. 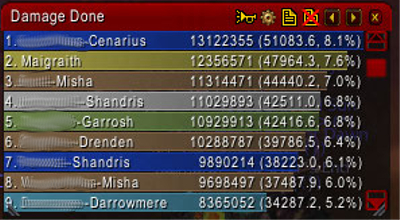 Granted, this is Zon’ozz, so my DPS has been artificially inflated by quite a bit, but still…

Again, I’m not boasting here. I’m really not that good. It’s just funny how much difference good gear and the occasional over-powered class can make.

4 thoughts on “I Just OPed Myself”