The Secret World’s holiday event this year was a tad underwhelming. No new content beyond some tacky decorations in Agartha and a very dull snowball fight minigame.

Some of the new cosmetics were nice, though. The moose and reindeer mounts are cool, though sadly out of my reach, and the new frost sprint is really pretty. Plus some nice general use winter clothes… and Elf ears.

An item that gives your character Elf ears in The Secret World.

So, um, I had kind of a brain meltdown and a brief existential crisis and stuff happened, and…

Well, long story short, I bought yet another character slot and created a character I could RP as an Elf from the start.

This is my fifth character, and once again this is a game with very little use for alts to begin with and no reason at all to have more than three characters.

The worst part? She’s another Dragon — my third Dragon. It seemed to make the most sense from a lore perspective, and I wanted her to have as many green outfits as possible.

I don’t know if I’ll even play her to any serious degree. I still haven’t even finished Kingsmouth on Kamala…

I am at least trying to make her fit within the TSW universe. “Everything is true,” after all, and there’s already lots of Norse mythological stuff in the game, so I’m basing her character on the Elves the ancient Norse believed in — gave her a Norse inspired name and so forth. My thinking is the Elves in TSW would be a bit like the Jinn — embittered ancients struggling to cope with the modern world.

I’m waffling on her build at the moment, as I am wont to do. I started with elemental/chaos, but now I’m thinking elemental/blood makes the most sense, given Elves were viewed as the bringers and curers of disease. Shame — one day I’ll have a character that actually uses chaos seriously, maybe.

She did turn out to look pretty cool, at least — really surprised how good she looks in the geisha top from the issue ten CE — and if nothing else she’s been good screenshot fodder. 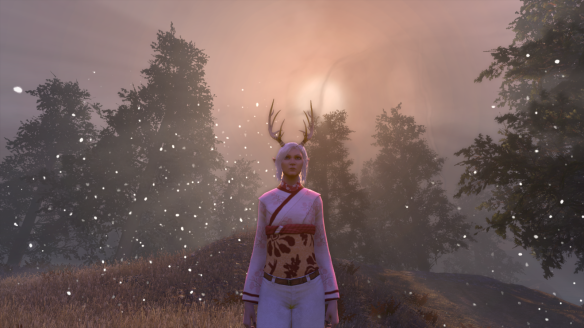 And honestly? Just knowing I have an Elf in TSW makes me feel better. More at peace with the universe.

Because Elves, that’s why.

This was also my first time creating a new character since the global rebalance whose proper name escapes me but is usually referred to by fans as the NGE or the EPEEN.

It’s not a huge difference, but it is noticeable. The main change is the section in your faction’s training area. It now includes more instructions as to the proper use of the builder/consumer system (tailored to the unique mechanics of each weapon type, which is a nice touch), and it makes sure you grab two weapons before leaving.

It’s still a long way from explaining all the complexity TSW offers — I especially think more attention should be put toward explaining the importance of using passives from multiple weapons — but it’s unquestionably an improvement.

One strange thing is that you no longer get a full set of white gear upon leaving the tutorial and now enter Kingsmouth with most of your gear slots empty, but that gear never made much difference anyway, and it was always replaced quickly, so I guess it’s not too big a deal.

Interestingly, not all the changes are mechanical. The cinematics for new characters have also received at least one change: The dark-clothed fellow who appears to speak for the Dreamers has had a makeover and now sports some gnarly face tattoos.

Exactly what this means is somewhat open to interpretation, as are most things in TSW, but if you read through the discussion I started about it on the official forums, it seems it may actually have some intriguing lore implications.

3 thoughts on “TSW: Because Elves, That’s Why”