Final Fantasy XIV has gotten something most MMOs never get: a second chance. When it launched, it was one of the great trainwrecks of MMO history, universally viewed as virtually unplayable.

But the developers went back to the drawing board, rebuilt the game from the ground up, and now, against all odds, FFXIV is a well-regarded and successful game, even managing to make a mandatory subscription work in a market where that is almost unheard of.

I decided it was time to give the game’s free trial a whirl to see how this rebuilt MMO shapes up.

Final Fantasy XIV doesn’t exactly hit the ground running. After a lengthy character creation process, including several options that seem relevant only from a role-playing perspective (which I like but which is not for everyone), I was thrown into a seemingly endless string of cutscenes.

Now, I’m a big story fan, but these cutscenes were for the most part not even particularly interesting. Many lacked voice-overs, which seems a tad archaic in this day and age.

The most frustrating part came when the wagon my character was traveling on was ambushed by inhuman raiders. I thought, “Oh, good, I get to fight them off and be the hero!”

But against all tenets of good storytelling and video game logic, the cart simply rolled on, leaving the fighting to some local guards. The tedium continued.

Once I finally got control of my character, I then moved on to a seemingly endless spree of quests involving talking to various NPCs, ferrying messages, and doing other menial and irrelevant tasks.

During this time, I also noticed some odd and irritating quirks of FFXIV. For example, unlike every other MMO I’ve ever played, giving items to an NPC involves manually trading them rather than having them automatically taken from your inventory. The world is also heavily instanced, and unlike Neverwinter or other instance-heavy games, I see no compelling gameplay reason not to have an open world.

I’m not sure why this is, but FFXIV also had far more gold spam than any MMO I’ve ever seen. Every five minutes I’d get a whisper from “dfhfk gjgrnwnd” about cheap gil, and it just never ended.

The story also failed to impress out of the gate. It breaks the age-old writing law of “show, don’t tell.” NPCs constantly talk about how the world is recovering from a catastrophe, but everything appears peaceful, happy, and prosperous, and there’s no real sense of danger to the world.

On the plus side, it doesn’t seem to be reliant on knowledge of past Final Fantasy titles. I didn’t feel at all lost or like I was missing anything important by being a Final Fantasy virgin.

It was well over an hour into my excursion into FFXIV that I finally embarked on a quest involving something I would classify as gameplay: I was tasked with killing squirrels.

Yes, seriously. Squirrels. Not even rats.

At this point, I began to wonder if this was really a game or just some incredibly elaborate, Joaqin Phoenix-esque parody of MMO tropes.

Mercifully, things did improve from there.

Once I actually got into the meat of the game, and no longer had to murder squirrels and other small animals, my experience with FFXIV improved significantly.

At first, mostly all you’ll be doing in FFXIV is quests. These are very much in the standard “kill this/collect that” mould we’re all familiar with, but they flow well and don’t feel especially grindy or inconvenient.

There are also occasional dynamic events — bearing the awkward and seemingly random acronym of “FATEs”. These are pretty simple, but they add a nice amount of variety. On the downside, they don’t seem to be readily soloable, so they might become something of a burden once lower level zones are less populated.

In the end, though, it didn’t feel that different. It is a bit slower, but the gorgeous skill animations help stop things from being too boring, and since some enemies have powerful telegraph skills similar to what you’d see in WildStar or The Secret World, there’s more to combat than just mindlessly spamming skills.

The only problem crops up with spell caster classes. As with many other MMOs, their casting is interrupted by movement, and that combined with a 2.5 global cooldown and fairly mobile combat makes for an absolutely miserable experience. Thankfully, melee classes and archers can move and fight. 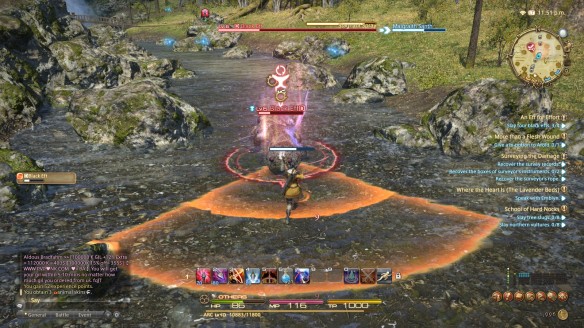 As you level, FFXIV slowly opens up and reveals itself as an incredibly feature-rich game.

Around level ten, you’ll get access to guildleves, which are akin to daily quests with a few minor twists. In terms of gameplay, they play out a bit more like the FATEs than standard quests, and a nice quality of life perk is that they teleport you back to the quest-giver when you’re done.

Related to these are guildhests, which are short instanced challenges reminiscent of World of Warcraft’s scenarios. They’re a good way to learn basic grouping mechanics.

Around this time, I also got a quest to be introduced to the game’s player housing. This was one time where the game swung back into the realm of frustration, because it wasn’t until the very end of the quest I learned housing is only for max level characters — and only very wealthy ones, from the look of it. I don’t understand why the developers wasted my time by telling me about a feature I wouldn’t be able to use for forty levels.

Of course, FFXIV also offers a selection of dungeons. The ones I played were all fairly high quality, if a bit lacking on story and heavy on trash for my taste.

FFXIV offers an excellent automatic grouping tool — something far too many MMOs are still neglecting — for dungeons, guildhests, and other group content. From the look of it, it can even be used to do raids, which is fantastic.

There are some good social tools to help players work together, too. The game has an auto-translate dictionary full of commonly used terms that allows you to more easily communicate with players who don’t speak your language, and there’s a player commendation system where you can commend people you’ve been grouped with for being especially helpful. With enough commendations, a player can earn some nice rewards.

There’s even more stuff later on that wasn’t included with the trial. Players can raise large birds called chocobos as combat companions, and there’s a retainer system that allows you to send NPC minions on mission, which sounds reminiscent of similar systems in Neverwinter and World of Warcraft.

FFXIV is also an incredibly beautiful game, with vibrant and detailed graphics and breathtaking environments. What most impressed me was the weather effects. Some MMOs might occasionally throw in some rain, but FFXIV offers a full battery of weather effects: fog, overcast, clear skies, rain… Coupled with the day-night cycle, it makes for a very vibrant world that is always offering new visual thrills.

The only slight downsides from a visual perspective are that certain creatures and characters have a very cartoonish anime-style appearance, which contrasts jarringly with the game’s otherwise realistic style, and it does have a fairly bad case of “female armor.”

The one other noteworthy thing about Final Fantasy XIV is that it allows player to multi-class infinitely. In theory, you can learn every single class on one character.

There are incentives for doing so, too. Certain skills can transfer between classes. For example, my archer gained an extra DoT, a defensive skill, and a heal by spending a few levels each as a marauder, a lancer, and a conjurer.

The downside to this is that taking up a new class essentially involves starting over at level one. You do get a sizable boost to experience on lower level classes, but it’s definitely not trivial to develop secondary classes.

It’s still better than not being able to learn other classes at all, but I definitely prefer the systems for changing ability sets in Rift and The Secret World.

The classes also don’t seem to have a lot of mechanical variety. They all felt more or less the same to me — just with different animations.

An odd quirk is that crafting and gathering skills also count as full classes, complete with their own gear. I’m not sure what the point of this is — seems a bit unwieldy to me.

Tedious opening aside, Final Fantasy XIV is a very solid MMO. It has no shortage of options, and most of its flaws are minor.

Despite that, though, I have trouble recommending it for one simple reason: If you take away the Final Fantasy name, there’s nothing to distinguish this from Rift, Aion, World of Warcraft, or countless other similar games. There’s little FFXIV does poorly, but there’s equally little it does exceptionally, and you can get an experience of equal or greater quality from many other titles — most of which are free to play.

If you’re already a Final Fantasy fan, you should definitely play it. Otherwise, it’s just another entry in a crowded marketplace.