While Neverwinter ultimately dominated my holiday gaming, I did still find the time to poke my head into The Secret World and explore its Christmas events. As far as TSW events go, this one was a tad disappointing, but it still had its positive moments.

Between still being relatively new to the game and my crippling lag at the time, I missed out on a lot of the Mayan Apocalypse stuff last year, so I was glad to see most of the content of that event return. I was able to defeat the Harbinger world bosses, now called Vestiges, and complete the Xibalba dungeon.

The Vestiges were worthwhile just for the mission turn in text. You know, I’m not really a big fan of the Templar mission reports — I usually find them quite dry and dusty. But the image of Dame Julia going a bit too hard on the egg nog and going on a tear through Temple Hall pretty much made my day.

I’m a bit torn on Xibalba, though. At face value, it’s a cool dungeon. It’s visually spectacular, and while brief, it provides an interesting challenge.

The way the lore there works is just obnoxious, though. I’m okay with requiring a special achievement to unlock the lore, but once you’ve unlocked it, it should stay unlocked. Having it only appear for a few seconds in the middle of a challenging and hectic boss fight is a dumb, dumb idea that is unworthy of a game as good as TSW.

The community didn’t help much, either. When, oh, when will the MMO community learn that trying for hard mode achievements in PUGs is almost never a good idea? 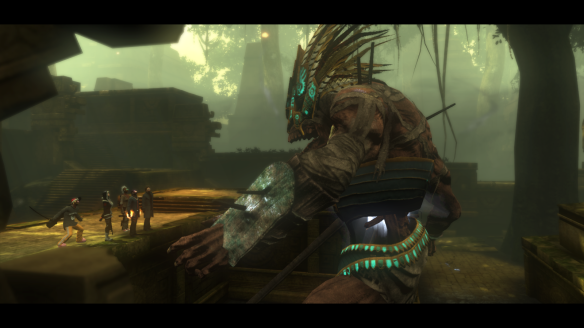 PUG 1: “Hey, guys, let’s do this on nightmare. And we can do the debuff achievement, too!”

Me: “I don’t think I can heal through that.”

Guess how well that went.

And aside from the lore, there wasn’t a lot of incentive to run the dungeon, either. If you’re just gearing, some of the drops might be a little useful, but otherwise, you’re just hoping for an incredibly rare clothing item drop.

But it was nice to finish the storyline after a year. I’m a bit sad Monty and Arun weren’t able to patch things up, but at the same time, this is what I respect about TSW. They don’t pull their punches, and not everyone lives happily ever after.

Now, if only they could have brought back the random zombies spawning all over the world…

Krampusnacht and the Two-Faced Mother:

The other holiday event, new this year, was Krampusnacht, and it’s also something I have mixed feelings on.

On the one hand, I think it’s awesome they found a Christmas event that actually feels at home in TSW’s lore. Holiday events are usually the goofiest, most immersion-breaking things in MMOs. TSW managed the seemingly impossible and made Christmas frightening by building the event around the European tradition of Krampus, a sort of dark counterpart to Saint Nicholas who comes to torment naughty children.

And then they ratcheted up the awesome by tying it into Norse mythology. In TSW, Krampus is the son of Hel, Norse goddess of the dishonourable dead. The ultimate battle with her and her son took place in Niffleheim, icy realm of death at the root of the World Tree.

Niffleheim was nerdgasmic for me. Aside from my being a huge Norse mythology geek, it was just a fantastic map. It was beautiful, yet disturbing, and perfectly blended modern holiday themes with Norse stylings.

The audio in Niffleheim was brilliant. Turns out Frosty the Snowman is actually a pretty creepy song when it’s sung by the anguished wails of the souls of lost children.

Also, Christmas trees trimmed with what appeared to be human intestines and dirty socks.

I love this game.

But perhaps the most interesting thing about Niffleheim was the fact that it looks to be located within the Hell Dimensions. The implications for the greater lore are huge, considering how important both Hell and the Norse pantheon are to TSW’s story.

It raises so many questions. Hel is Loki’s daughter; does this mean Loki had a hand in the creation of the Hell Dimensions? Is he a member of the Host? Is he from the Second Age? Or did he just dump Hel off there later? Niffleheim is supposed to be at the root of the World Tree, but the roots of Agartha are drowned in Filth. Is Hell beneath the Filth? Is Hell the source of the Filth? If Hell’s drowned in Filth, that might explain why it’s cut off from anima.

It also occurs to me that it’s “Hell Dimensions.” Plural. What if Wicker’s Hell is just one of several Hells, with Niffleheim being another?

Really hope this is expanded on at some point.

But there were also some major issues with this event, as well. For one, there was essentially no story to speak of. All that lore speculation above is based purely on the presence of recognizable Hellish technology in Nifflehim. Our only source of background info was the lore entries, which honestly weren’t all that illuminating. 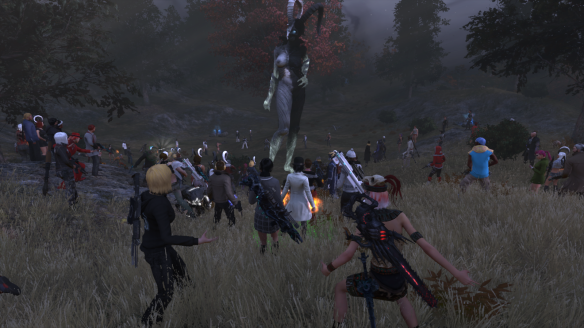 They even reused one of the lore entries for a Dragon mission report, which is a shockingly slapdash move for TSW.

The whole thing was pretty convoluted, too. Everything was a tangled mess of RNG and arcane rituals. The number of things that needed to go right for people to be able to summon the super Hel world boss — arguably the only part of the event to offer anything decent in terms of rewards — was absurd to the point where I’m amazed I got to fight her as many times as I did, and it still took a lot of waiting and praying.

And the rewards were pretty damn underwhelming. Granted, these things are subjective, but ugly sweaters, socks, and used underwear are not compelling rewards for me. They may fit with the mythology of Krampus, but they’re still really, really lame rewards, in my view.

Though there was one reward piece that I liked. Well, two. Kill super Hel enough times, and you’d get a chance to earn a wearable set of her horns, or those of her son, Krampus.

The Hel horns are a bit over the top, but I love the Krampus horns. End result: My screenshot folder has been further bloated by another avalanche of beauty shots of my Templar. 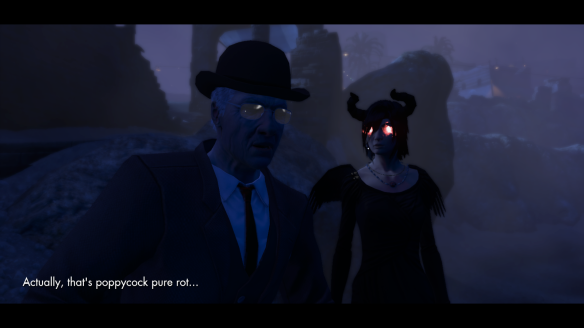 3 thoughts on “TSW: It’s the Most Horrible Time of the Year”