Despite the near total lack of promotion or pre-launch info for the game, I’d been looking forward to Draugen for some time. A psychological horror game with Nordic themes by Ragnar Tornquist seemed the next best thing to a new Secret World game.

I think I may have over-hyped Draugen to myself a bit, but it still wound up being a solid game.

Set in 1923, Draugen is the story of Edward Charles Harden. Accompanied by his ward, Alice (AKA “Lissie”), he journeys to the remote Norwegian town of Graavik to search for his missing sister.

Upon arrival, Edward and Lissie find Graavik deserted, and as the days unfold they delve into the mystery of what befell the town as they search for Edward’s sister.

It is very much a walking simulator. There’s no combat, and the handful of challenges you do encounter are too simple to rightly be called puzzles.

Also, despite how I’d heard it promoted, I wouldn’t say this is a horror game. There are a handful of mildly scary sequences, and the story deals with some dark themes, but I don’t think it actually qualifies as horror. Indeed, most of the time the game is quite tranquil — relaxing, even.

It is, however, a mystery. You’ll spend most of your time uncovering clues, and the way the picture of what happened in Graavik slowly unfolds is very well done. It feels neither too slow nor too rushed, and it will definitely get you thinking as you try to put the pieces together.

However, if you want the sort of mystery where everything is wrapped up in a neat little package, you will be disappointed. The ending of Draugen is quite inconclusive, and it’s very much up to the player to decide for themselves what really happened in Graavik.

This is not a style of storytelling I’m especially fond of, but I felt it worked here for a couple reasons.

One is that it doesn’t feel cheap. Nothing is withheld from the player; you learn everything that characters in that situation reasonably could. They might not wrap everything up, but it’s not the sort of story that keeps everything vague and mysterious just for the sake of being “artistic.”

The other is that I choose to believe this is a TSW game.

Going in, I had already half-jokingly decided that I was going to treat Draugen as part of the Secret World setting, even if it’s not officially labeled as such, and while nothing in the game disproves that notion, there’s not an enormous amount of evidence to support the idea, either. The closest you get is a piece of dialogue near the end that echoes a mission from TSW so well I question whether it can be a coincidence.

But I do grant even that is far from conclusive.

However, if I press forward with my idea that this is a TSW game, it works wonders to fill in all the blanks of the story. It’s hard to say more without spoilers, but connecting Draugen to TSW is for me the perfect way to make the story make sense.

So Draugen didn’t blow me away — if I’m being honest, The Park is definitely the superior TSW-adjacent walking simulator — but it is a game I’d recommend. It’s interesting, and it’s well-done.

I wouldn’t say you need to know TSW to enjoy it, but I definitely think it helps.

If nothing else, it’s worth it just for the breathtaking graphics and soundtrack. This game is an absolute feast for the senses. 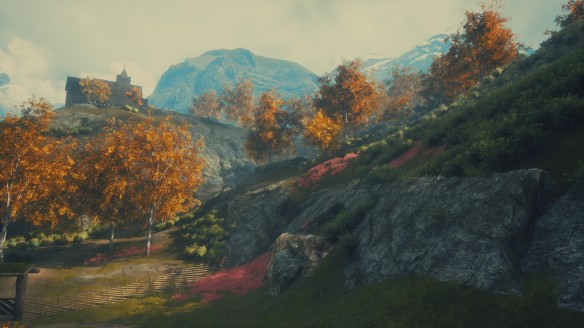 Interestingly, it seems a sequel may be on the way at some point. The credits conclude with the message, “Edward and Alice will return.”