It’s funny to think I was so skeptical about a continuation of the Mass Effect series. For a while there are I was considering not trying Andromeda at all. But having now finished the game, I’m very glad to have kept an open mind. 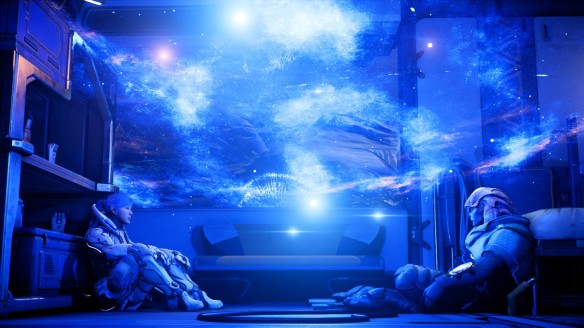 I will be avoiding major plot spoilers as much as possible.

First of all, let me say that this is very much a Mass Effect game. A few things are different, but nothing’s radically changed. If you liked the previous ME games, you’ll like this one. It does have its flaws, but most of them are things you would naturally expect of any Bioware game.

That doesn’t entirely excuse the problems, of course. One of the biggest is that this is once again a game that has favoured side content to an unhealthy degree. In the end, it’s maybe not quite as obnoxious on this front as Inquisition was, but it’s still kind of obnoxious.

It’s not just the amount of side quests and exploration, but how repetitive a lot of it is. I think something that dragged Andromeda down is how little environmental variety there is. More than half the worlds you visit are empty deserts, and the monotony of the scenery really wears you down after a while.

It’s very disappointing in a game that is supposedly about exploring the unknown and discovering wonders, and doubly so when you contrast the endless wastes with the sections of the game that are more creative. One of the most memorable parts of the game for me was the planet Havarl, a bioluminescent jungle world that is absolutely breathtaking. 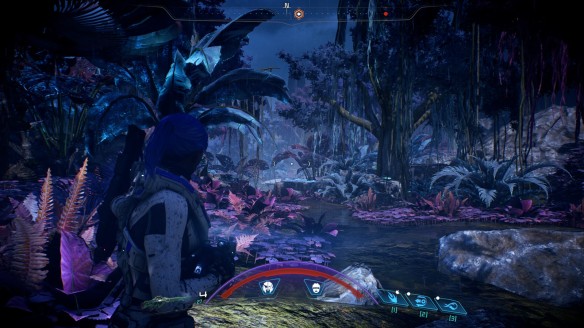 We needed a lot more locations like that, and a lot fewer endless brown desert zones.

Something else that inhibited the game’s sense of exploring the unknown is how much time you spend fighting criminals elements of your own people, the Andromeda Initiative. I’m okay with the idea that some people went Lord of the Flies when confronted with the challenges of Andromeda, but it’s, like, half the game. How did so many immoral, unstable people even get admitted to the Initiative?

I know this much: I didn’t buy a game about exploring another galaxy so I could fight generic human crooks.

In general some more variety in threats would have been nice. Andromeda has a better variety of enemies than past installments, but it’s still mostly lacking boss fights. When they want to ramp up the difficulty, they just throw more of the same old trash mobs at you. Some more creativity would have been nice.

The one exception is the Remnant Architects, open-world bosses analogous to Inquisition’s dragons, but even these quickly become repetitive.

You see, every Architect fight is exactly the same. The mechanics never change at all. And their mechanics also happen to be virtually the same as those of Dark Matter Monoliths in Defiance, which made them feel even more repetitive for me.

I have killed a lot of Monoliths.

But when those issues don’t apply, exploring the Andromeda Galaxy can be a real treat. You may spend too much time trekking through the desert, but you’ll also marvel over wondrous new worlds and delve into profound alien mysteries.

A few weeks ago I said that Andromeda is the best Star Trek movie in years, and while I was half-joking, there is a lot of truth to that. There is an incredible sense of mystery and discovery running through many parts of this game. Not as many parts as there should have been, but when it delivers, it really delivers.

It’s not just about the sights and the story, either. A wealth of puzzles and environmental hazards constantly remind the player that exploration is a difficult business. It makes the game world feel much more like a real place — it’s not always an easy road, but that’s what makes it rewarding.

The feeling of exploration even helps make the wealth of side quests a little more tolerable. It’s easier to justify wandering all over and investigating every little thing as a Pathfinder exploring a new galaxy than as an inquisitor in a race against time to stop the world from literally exploding.

Similarly, the combat has its repetitive elements, but fundamentally it’s still very fun, and it can offer some real thrills. Andromeda doesn’t change a lot about Mass Effect combat, but it changes enough to matter.

Combat in Andromeda is a lot more mobile, a lot more dynamic, than in past installments. You can’t just camp out in cover and snipe enemies with impunity anymore — not all the time, anyway. It’s a little more challenging and a lot more exciting.

The build system helps with this. In Andromeda, classes are gone, and you can instead pick any skills you want from combat, tech, or biotics. You can even save multiple skill sets and swap between them in combat.

Now, this isn’t quite as much flexibility as advertised. It took me until relatively late in the game to unlock a second set of skills (a vanguard-style melee set-up) without compromising my main build, and I never had enough skill points for more than those two builds. But it’s still much more flexibility than we had in past games, so I call that a win.

One final thing about the gameplay that bugged me is that Andromeda has taken a step backward by returning the Mass Effect franchise to a vertical progression grind wherein you have to regularly update your gear, and where loot (most of it entirely worthless) drowns you at every turn. Not a change I welcome.

The best gear by far comes from crafting, which means you don’t have to be at the mercy of RNG, but it also means all the dropped gear is just a waste of space.

But the story and the characters are the true heart of any Bioware game, so let’s talk that, shall we?

The main story in Andromeda is pretty sparse, but unlike Inquisition or ME2, it doesn’t feel underdeveloped. It tells all the story that it needs to.

The villains this time are a race of imperialistic aliens called the Kett. The Reapers were some of the greatest antagonists in sci-fi history as far as I’m concerned, and the Kett can’t live up to that legacy, but they’re scary and alien enough to serve their purpose.

Really my only complaint is how dorky they look. Everything about the Kett themselves and their technology looks like it came from the bottom of Star Trek: Voyager’s reject pile.

But ultimately the Kett are just one part of the grand galactic mystery that makes up Andromeda’s story. I can’t say much without spoilers, but it’s a story that exemplifies the sense of wonder that lies at the heart of speculative fiction. I loved it, and the ending is magnificent.

The characters, too, are strong, as one would expect from Bioware. This is perhaps the first game I’ve played from them where I didn’t strongly dislike any core characters. Liam started getting on my nerves after a while, and Vetra’s a little boring, but there’s no one I truly hate the way I did Vivienne or Zaeed.

The biggest surprise was Drack. I’ve never been a Krogan fan, but he actually became one of my favourites. Turns out “adorable Krogan grandpa” is a pretty good character concept.

Jaal also stood out. It took me a while to warm up to him, but in the end he really won me over. He reminds me of Garrus — he’s the one you can trust to always have your back when it hits the fan — but he’s warmer and all around more likable than Garrus was.

However, I was disappointed by the amount of character content. It’s definitely less than you’d expect from a Bioware game, and it’s quite imbalanced, too. Some characters get a lot more attention than others.

PeeBee seems to get quite a lot of content — of course the sexy Asari is going to get plenty of time in the spotlight (eye-roll) — and Jaal and Drack also get a decent amount, but Suvi has hardly any content at all. Which is a crying shame because she’s easily the game’s best character.

Anyone who complains about the facial animations in this game has never seen Suvi nerdgasm.

I also found Ryder, the main character, a little flat-feeling. This despite the fact I like Fryda Wolff a lot better than Jennifer Hale (sacrilege, I know). I think the dialogue changes might be to blame.

I don’t mourn the rigidity of paragon/renegade, but the new tone options are so similar to each other it’s hard to define a specific personality for your Ryder.

There’s also a surprising dearth of “mean” options. It’s like instead of blurring the lines between paragon and renegade, they just made everyone paragon. This shouldn’t bother me since I was always pure paragon anyway, but somehow it does. Being the good guy doesn’t feel as meaningful if you don’t have the option to be the bad guy.

Still, there is enough character here to give the game real heart.

I’ve been reviewing things on this blog and elsewhere for a long time, and I’m coming to the conclusion reviews can be surprisingly hard, because there’s a lot about how things fit together and how things feel in the moment that can’t be explained in rational terms. Andromeda is a good example. I can rattle off no end of things I didn’t like about it, but the end result is still a game I deeply and truly enjoyed. It’s somehow more than the sum of its parts.

Reading it back, this sounds like a fairly lukewarm review, but the fact is I loved Andromeda. Partly it’s that a lot of my favourite things about it are things I can’t talk about without spoilers, but partly there’s something special about this game that can’t be readily quantified.

I can’t wait for DLC. I’m most hoping for stories relating to the “benefactor” and Keelah Si’yah.

One another thing: I was surprised and delighted to discover the song that plays during Andromeda’s credits is by none other than Norwegian prodigy Aurora Aksnes. I’ve been a big fan of Aurora’s for a while now, and I can’t believe I didn’t know she was involved with the game.

I hope the extra exposure gets her more fans; she totally deserves it. If you’re looking for it, the credits song is called Under Stars, and while you’re at it, I recommend checking out her other stuff, too. Warrior, Winter Bird, and Runaway are my favourites.