The inevitable finally happened: I reactivated my World of Warcraft subscription. At nearly half a year, this was probably my longest break from WoW since I started playing back in Wrath.

I’ve actually been back for at least two weeks now, but I wanted to have some substantive thoughts on the subject before I wrote a blog on my return.

I’ve gone through the Battlefield: Barrens storyline on both my rogue and my warlock, and I’ve had radically different experiences of it between the two characters.

On my rogue, I was supremely underwhelmed. For once, I’m inclined to agree that the Alliance got the short end of the stick on the story department. Spying on the Kor’kron and then joining up with Vol’jin because reasons was just weak. By comparison, the Horde story was epic and engaging, with strong showings from some favourite characters.

But the story wasn’t the only factor. On Antonidas, where my rogue dwells, I found the Barrens to be a ghost town. This made fighting the commanders pretty much impossible, and collecting resources turned into a soul-crushing grind.

On the other hand, Wymrest Accord was thriving. There was always a few dozen players flying around, and that made it easy to go from commander to commander. It felt epic in the way a world event should, and it was overall a pretty fun experience. I even got to play an important role in one fight by putting on dark apotheosis and serving as a tank. 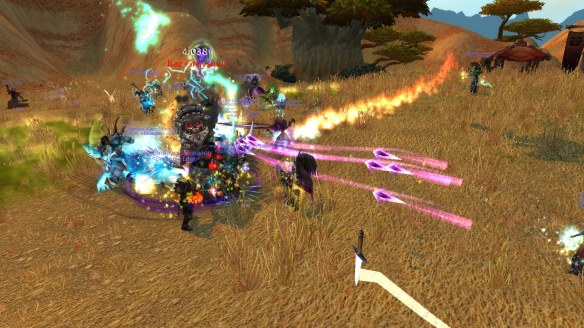 Overall, it’s hard not to look at Battlefield: Barrens and say “Blizzard is trying to be Guild Wars 2, and not being very successful.” But I do give them credit for trying something new, and I would like to see them continue to experiment with dynamic content.

I’ve also had the opportunity to finish Throne of Thunder. Only the first two wings were available when I quit.

I find it to be a pretty weak raid. This doesn’t surprise me; I’m just not a Mogu fan. Doing the eggs on Ji-kun is fun, and I love the glorious chaos of the start of the Dark Animus fight, but otherwise, Throne of Thunder just ain’t doing it for me.

On the plus side, I did quite enjoy the end of the Isle of Thunder storyline. Can I just say that I really, truly adore Taran Zhu?

Speaking of the Shado-pan, I also decided to take advantage of the removed reputation restrictions and begin doing their dailies on my rogue. Compared to the agonizing Golden Lotus grind, the Shado-pan dailies are actually pretty fun. Not too time-consuming, and I like the NPC companions and having some elite enemies to tangle with. Good faction for a rogue to work with, as well.

The new scenarios are fairly fun, too. Blood in the Snow turned out a little simplistic for my taste, but the Goblin ones are quite amusing (“I’d hardly call that a fire!”), and Battle on the High Seas is just a swashbuckling good time.

Getting used to playing again has been easier than I expected. I guess I’ve been playing these characters for so long I could pretty much do it in my sleep. I did catch myself trying to dodge a few times, though.

Oddly, the one thing that’s really jarring me about going back to WoW — aside from not being able to cast and move on my healer — is its reliance on RNG. The Secret World’s reward structures tend to be very predictable. Do X content Y times and get Z rewards. In WoW, everything’s a gamble.

I’ve been trying to get my warlock the shoulders off of Tsulong since the raid launched. Needless to say, I am vexed.

Despite the easy readjustment and comforting familiarity of Azeroth, I do find it hard to get excited about WoW as I once did. I still enjoy the game (mostly), but it’s really starting to show its age for me. 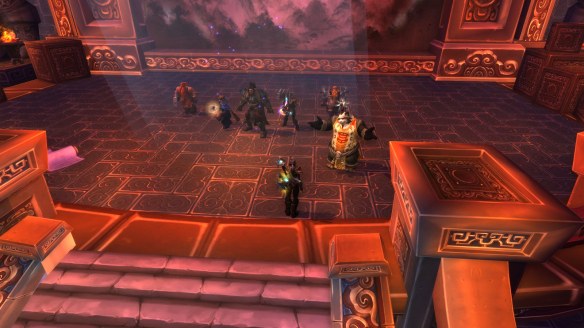 Playing other games — especially TSW — has really raised my expectations for what MMOs are capable of, and WoW just seems… stale. WoW’s graphics are just a bit too crude, its combat too easy, its design philosophies too restrictive.

I’m not even sure what Blizzard could realistically do to get me truly excited again. A really cool new class or fourth specs for all the old classes would shake things up, but even that might not be enough.

But I don’t want to get too pessimistic. I’ve said this countless times, but Azeroth does feel like home to me. Whatever complaints I might have about World of Warcraft, I’m still a big fan of Warcraft as a universe. Even if it doesn’t have my jumping for joy anymore, it is good to be home.

One particular bright note is that my rogue finally has enough gear that she’s starting to be fun to play again. She can do dailies without it being an agonizing chore, and I don’t spend all of every dungeon staring at my energy bar and praying for a combat potency proc.

I also decided to go back to her traditional “Alliance pride” transmog set, and this had a surprisingly positive effect on my experience of playing her. She feels like her old self now.

It’s funny how that character has always wound up as my neglected alt, but she’s also the character I’ve played the longest, and she’s probably the one I’m most attached to. She’s almost become a part of my digital identity, as I now end up basing at least one character on her in every MMO I play.

More than anything else, playing my rogue again feels like coming home.

1 thought on “WoW: A Digital Homecoming”