With the addition of transmogrification to World of Warcraft and players gaining the ability to make their characters look however they want, the issue of female armour, and specifically skimpy female armour (AKA “platekinis” or “slut plate”), has gotten a lot of attention. After reading some other blogs on the topic, I decided I should give my opinion on the matter.

Of course, the most common objection to the platekini is that it is sexist and demeaning towards women. I personally think it is (at least until the male versions of those sets are just as revealing), but I’ll leave such weighty matters to those who are older and wiser than I. Instead, I’ll tell you what I’ve got against sets like glorious plate and black mageweave.

“But it’s a fantasy game!” I hear you say. “We fight dragons and hurl fireballs with our brains!”

True, but a fantasy setting does not give you carte blanche to throw all logic to the winds. Quite the opposite, in fact. It is imperative for a fantasy setting to maintain logical consistency and a sense of realism; it makes it easier to swallow all the impossibilities. It saddens me to see how many people think that explaining everything away by saying “lol magic” is a legitimate story-telling device.

“But we’re fighting giant dragons! No amount of armour would protect you from something that big.” Possibly correct, but if you go into a raid half-naked, the dragon won’t need to fight you. He just needs to bribe a peasant to poke you in the belly with a sharp stick. Problem solved.

And I don’t know about you, but if I was going to fight Demons and Faceless, I’d want to wear every damn piece of armour I could while still being able to stand.

This isn’t so much a problem with caster gear. They’re not supposed to be taking blows anyway, so it’s a bit more tolerable. But I’m still not a fan of skanky caster gear for other reasons, and that brings me to my next point.

Some might say it’s unfair of me to judge someone by their transmog set, but I don’t think it is. This is not like judging someone because of their clothes in the real world. Clothes are a necessity of life, and there are any number of factors that could go into a decision of what to wear that have nothing to do with appearance — comfort, economics, what’s clean that day…

Transmog, though, is entirely optional. Anyone with transmogged gear actively decided that was the look they wanted to show to the world. Video games are a medium generally used to live out one’s fantasies and experience things you never could in real life, so when someone sets out to show as much virtual flesh as possible, it’s hard not to come to the conclusion that these are people who don’t get out much.

Not to say that there aren’t some legitimate reasons for choosing a platekini. Maybe they like the look for reasons other than sex appeal, or maybe they’re role-playing as a seductive character. But I think we’re kidding ourselves if we pretend that the people picking the glorious set because they like the colour are anything but a minority.

And then there’s just the personal preference of thinking that women are more attractive in classy outfits than when dressed like prostitutes.

A right way and a wrong way:

But don’t think that I have anything against the female form or feel genders should be rigidly homogenized. It makes perfect sense for a fantasy setting to feature armour styled differently for women versus men. But there’s a right way and a wrong way, and black mageweave is definitely the wrong way.

Let me give you an example of the right way. You may remember my review of Dungeon Siege III a few months ago. One of the female playable characters, Anjali, provides a good example of the proper way to dress women in a fantasy setting.

Anjali is a melee character, and she thus wears heavy armour — mostly plate — yet she’s not some shapeless, androgynous mountain of metal. Her armour is sleek, elegant, form-fitting, and obviously feminine. But it also looks practical (aside from her high heels, which I do not condone); there’s no exposed midriffs or low-cut tops ripe for a quick sword slice. 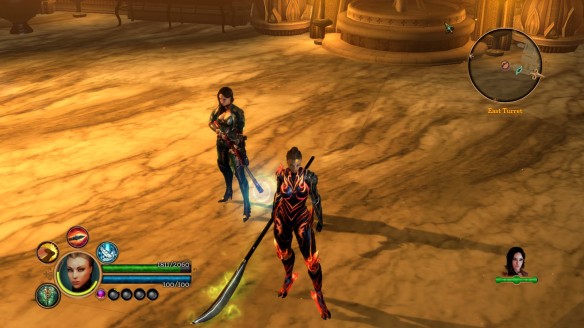 The villain, too, is a good example. Jeyne Kassynder’s armour leaves nothing exposed but her face, but its graceful elegance could never be described as anything but feminine.

I believe that the notion that a woman must resemble a stripper to be feminine is a modern fallacy.

WhatMMORPG has posted another of my articles, WoW Killers (That Didn’t Kill WoW). Amazing how people still think every new game is gonna come out of the blue and crush World of Warcraft, eh?

11 thoughts on “Female Armour: Just Say No to the Platekini (+ New Writing)”