I’ve been getting more writing work as of late. Not enough to pay the bills, still, but enough to give me something to do every day. I feel as though I should make mention of it, since this blog is supposed to be about my writing as well as my interests, but there isn’t much to say about it. I’m writing about ovens and automotive clear bras (that’s a thing, trust me); it’s not very exciting. So, I guess that just means another WoW post.

Because they seem to like screwing with me, Blizzard released the preview for the Deathwing raid, Dragon Soul, almost immediately after my previous post covering the 4.3 dungeons. More details were revealed in an interview with lead encounter designer Scott Mercer, but because it contained plot spoilers, I only skimmed it.

To be honest, this didn’t tell us much we didn’t already know. The battle will take place at Wyrmrest as Thrall and the Aspects seek to empower the Dragon Soul, also known as the Demon Soul, to destroy Deathwing. The Dragon Soul is an artifact very familiar to lore fans, though it may not be well known to the more casual fans–the game will likely provide its backstory in 4.3. There will be two encounters with Deathwing, one of which will involve parachuting onto his back and riding him across the ocean whilst trying to pry chunks of his armor off.

Still, a few things did jump out at me.

First is that, in 4.3, Blizzard seems to have completely abandoned the idea of dungeons being, well, dungeons. None of the new instances are really about exploring specific buildings or locations and are more instanced events. Indeed, Dragon Soul’s encounters will supposedly take place across a good chunk of Azeroth. This is a nice new take, and I hope they do more of this.

Next, there is mention that one of the new bosses, a faceless one and servant of N’Zoth called Warlord Zon’ozz, “waged endless war against the forces of C’thun and Yogg-Saron” in the distant past. This is actually an important revelation for lore; this is the first time there’s been any hint of conflict between the Old Gods in the past. Now, this isn’t hugely surprising, considering we’ve seen the modern servants of the Old Gods beating the snot out of each other since WoW launched, but it’s still an interesting insight into life on Azeroth when the Old Gods ruled.

Finally, they’re saying that this will be the most story-driven raid to date, featuring multiple cinematics as players crisscross the world in their final battle with Deathwing. We’ll even supposedly make a return to the Eye of Eternity at some point to recover the Focusing Iris to use against Deathwing.

This all sounds very interesting to a lore fan like me. I like the connectivity of it all. One of my complaints about World of Warcraft is how each expansion always seems to ignore the contributions of previous expansions. How many times have we seen the Naaru since Burning Crusade? How often has Darion Mograine shown up since Arthas died? But the Dragon Soul raid is pulling elements from all across lore–Wrath of the Lich King, Cataclysm, the novels…

It’s not Icecrown Citadel, but this is definitely a raid I’d like to experience, and it would be nice to finish a raid in the expansion it was released for once. Once again, I must place all my hopes upon the Raid Finder.

Two more tier 13 previews have been released, and these are the two I was really interested in: rogue and paladin.

The rogue set, Blackfang Battleweave, appears to be what would happen if Batman joined the Burning Legion. I think it’d look good on Blood Elves and Forsaken, but I can’t see anyone else pulling it off. If I get any for my rogue, it’ll be transmogged into my beloved T9.

Looking back at the retrospective, it seems that nearly every rogue tier set has been ugly. Only tiers 2, 4, 9, and 12 look halfway decent to my eye. And they say druids have it bad…

The paladin set, Battleplate of Radiant Glory, is another matter. It’s absolutely beautiful and perfectly captures the idea of being a beacon of hope and justice. Definitely my favourite T13 set so far, and if I get it for my paladin (she has the best chance of getting a T13 set of all my characters, but it’s still a big if these days), I won’t even need my carefully crafted transmog set. It might even become my new transmog set for future tiers.

I’ve updated my art page with two more WoW-related images, both created for graphics contests at GalacticaBBS. One is based on Algalon’s famed “I. HAVE. FELT. NOTHING!” speech from Ulduar. Because I am a doofus, I accidentally saved it in black and white. I didn’t want to start over, but hopefully it still conveys the proper emotion. The other is a joke poster advertising “Viper Jock” as WoW’s next hero class. 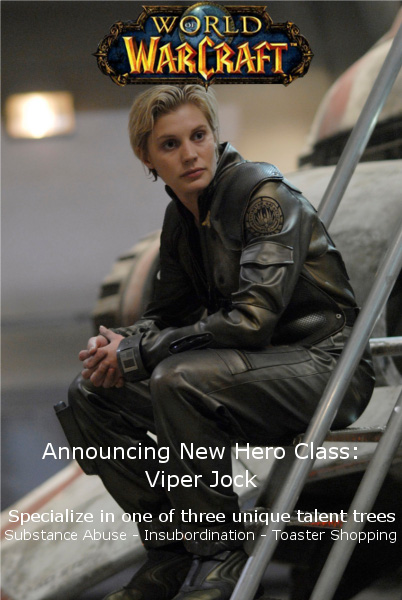 As ever, please share any thoughts on you may have on the raid, the new tier sets, or my meager attempts at art.

Now, how much you want to bet Blizzard does another huge announcement an hour after I post this?